If you thought the Galaxy Note 7 debacle news cycle was finally done with, you were wrong. Yesterday, a fire broke out at the Samsung SDI battery factory in China. This is the same factory that produced batteries for the Note 7 before the first recall of the handset…

Don’t jump to conclusions — this fire wasn’t caused by the production of a battery for the Note 7 (for obvious reasons) or any future devices like the Galaxy S8. The fire is reported to have started in an area of the factory that stores lithium-ion waste and faulty batteries. The production line itself was reportedly untouched and undamaged by the flames.

The Samsung SDI factory is located in a northern China city called Tianjin. Reuters found a blog for the Wuqing branch of the local fire department which noted that the “material that caught fire was lithium batteries inside the production workshops and some half-finished products.” The blog post also stated that over 110 firefighters and 19 firetrucks were dispatched to the scene to extinguish the small blaze. 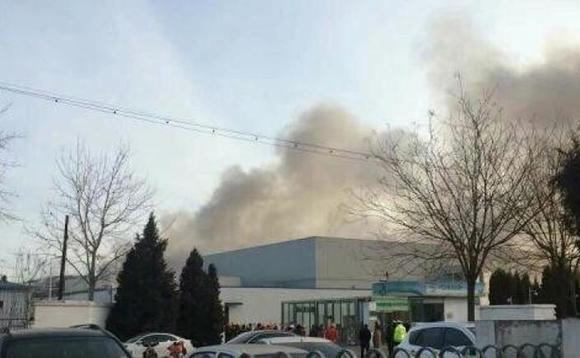 The fire took extra time and effort to put out because of the lithium-ion material that caught on fire. As we’ve noted before, lithium-ion can be highly unstable and is prone to cause damage if mistreated. While scientists are still looking for a replacement for the current technology, some teams are finding ways to just add fire extinguishers to lithium-ion batteries themselves.