Google expanding Fact Check worldwide, in all languages, in Search as well as News 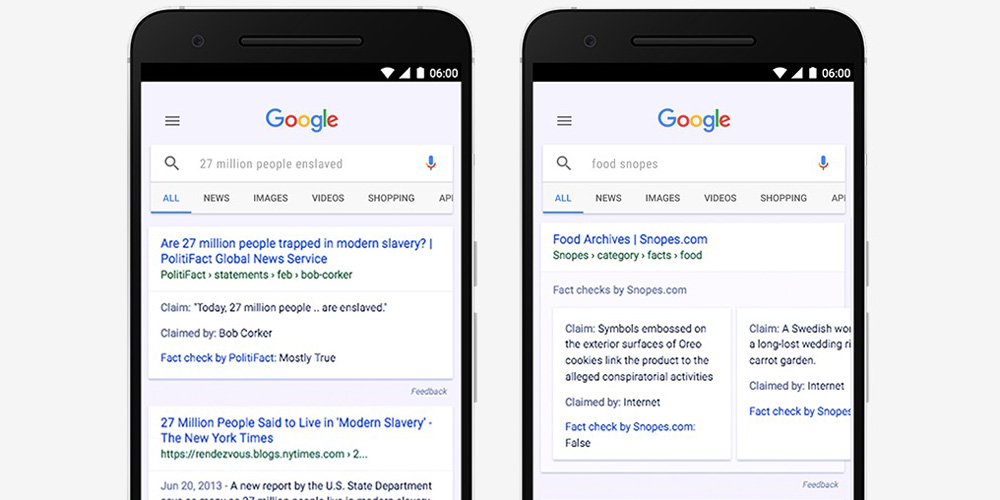 Google has today announced a major expansion of the Fact Check tool it first introduced back in October of last year to help counter fake news. The tool was initially limited to Google News, and restricted to just two countries, the UK and USA.

Google says that it is now making the tool available in Search as well as News, and rolling it out globally in all languages.

With thousands of new articles published online every minute of every day, the amount of content confronting people online can be overwhelming.  And unfortunately, not all of it is factual or true, making it hard for people to distinguish fact from fiction. That’s why last October, along with our partners at Jigsaw, we announced that in a few countries we would start enabling publishers to show a “Fact Check” tag in Google News for news stories. This label identifies articles that include information fact checked by news publishers and fact-checking organizations.

After assessing feedback from both users and publishers, we’re making the Fact Check label in Google News available everywhere, and expanding it into Search globally in all languages

You won’t, however, be offered a Fact Check for every single search you conduct …

The company explains that it will only appear in search results where there is what Google considers to be an authoritative result.

Google is also keen to emphasise that it is not doing any fact-checking itself, nor is it censoring any of the results.

There may be search result pages where different publishers checked the same claim and reached different conclusions. These fact checks are not Google’s and are presented so people can make more informed judgements. Even though differing conclusions may be presented, we think it’s still helpful for people to understand the degree of consensus around a particular claim and have clear information on which sources agree.

Any website can be considered for inclusion as a Fact Check source, but not all will qualify.

Only publishers that are algorithmically determined to be an authoritative source of information will qualify for inclusion. Finally, the content must adhere to the general policies that apply to all structured data markup, the Google News Publisher criteria for fact checks, and the standards for accountability and transparency, readability or proper site representation as articulated in our Google News General Guidelines.

It’s likely that the popularity of a site will be a key metric used to determine eligibility, but it’s not known what other criteria are employed. Google faces the same challenge here as with ranking search results: it wants to be as transparent as possible without providing enough information to allow sites to manipulate the results. It does, though, link to a database of fact-checking sites maintained by Duke, which specifies some of the criteria it employs.

The Lab considers many attributes in determining which organizations to include, such as whether the site: