Review: Sony Xperia XZ Premium has a display as crisp as the bills it’ll cost you [Video] 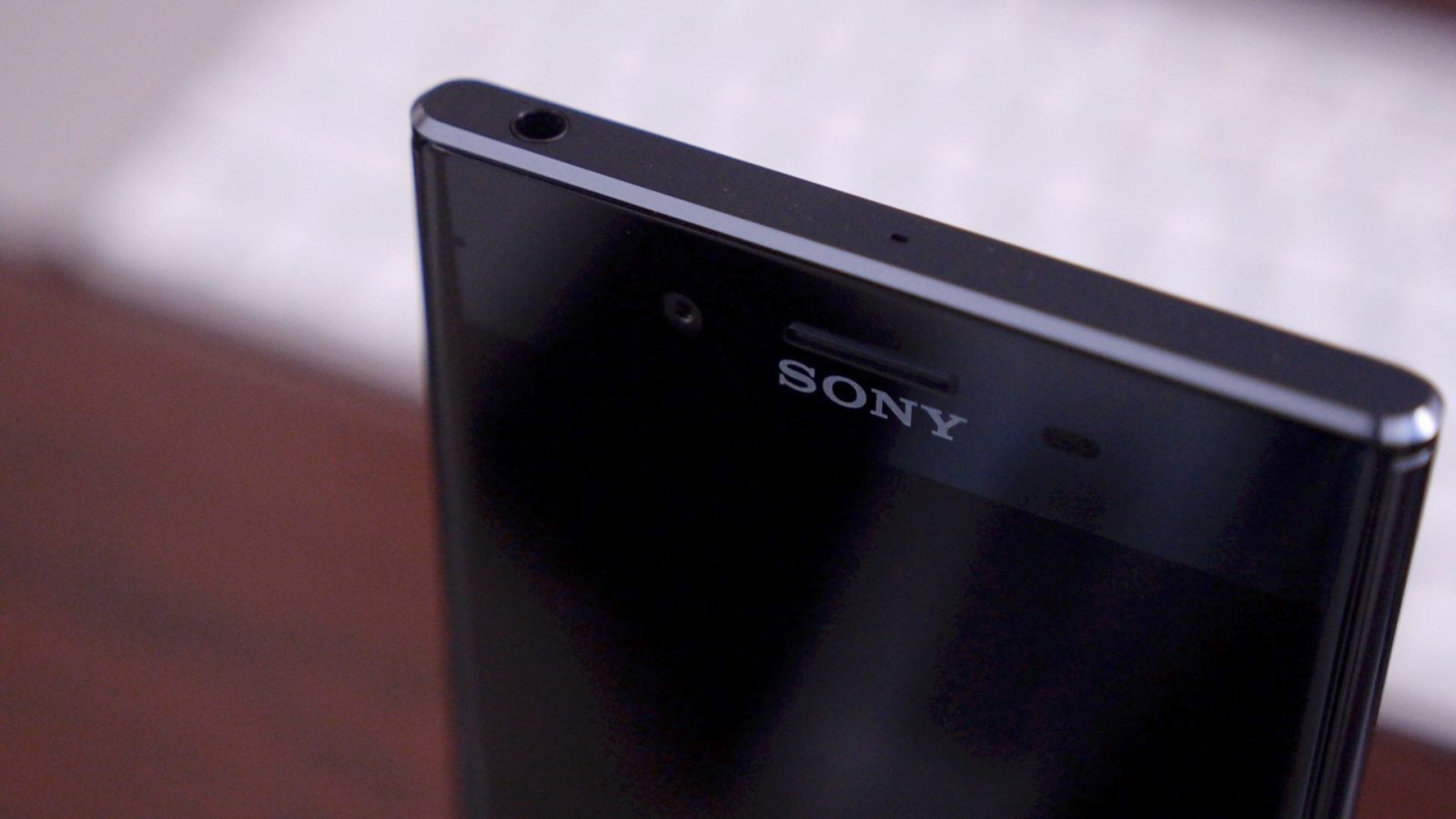 Sony has never had a strong presence in the Western smartphone market, but that doesn’t mean its phones aren’t worth your time. The Japanese company was one of the first to introduce water resistance on a smartphone, as well as a two-stage camera button (at least on the Android front), and now it’s the first and only manufacturer with a 4K phone.

These days, 1080p is still perfectly fine for the vast majority of users, and a lot of people can’t even tell the difference between 1080p and QHD on such a small screen anyway. So why is Sony cramming even more pixels into its latest superphone? Well, simply put, because it can.

The Xperia XZ Premium is Sony’s best-looking and most mature iteration of the design language it’s been using since the original Xperia Z. It’s an absolutely gorgeous piece of hardware, with a high-gloss coating over a metal and glass design. It feels smooth in the hand, and incredibly well-built; there’s absolutely no give in the chassis, and the Gorilla Glass 5 should protect it from shattering after a tumble — though be warned that Gorilla Glass 5 is known to scratch easily on other phones like the Galaxy S8.

In addition to its phenomenal build quality, the Xperia XZ Premium has a great understated aesthetic. The Deepsea Black finish on my review unit has an underlying blue tint that looks stunning in direct light, and Sony made a clear effort to keep the design as clean as possible.

Aside from the camera and Xperia and NFC logos, the back is completely clean, and the flat top and bottom of the phone each hold a single microphone pinhole and connection port (headphone jack and USB-C, respectively). 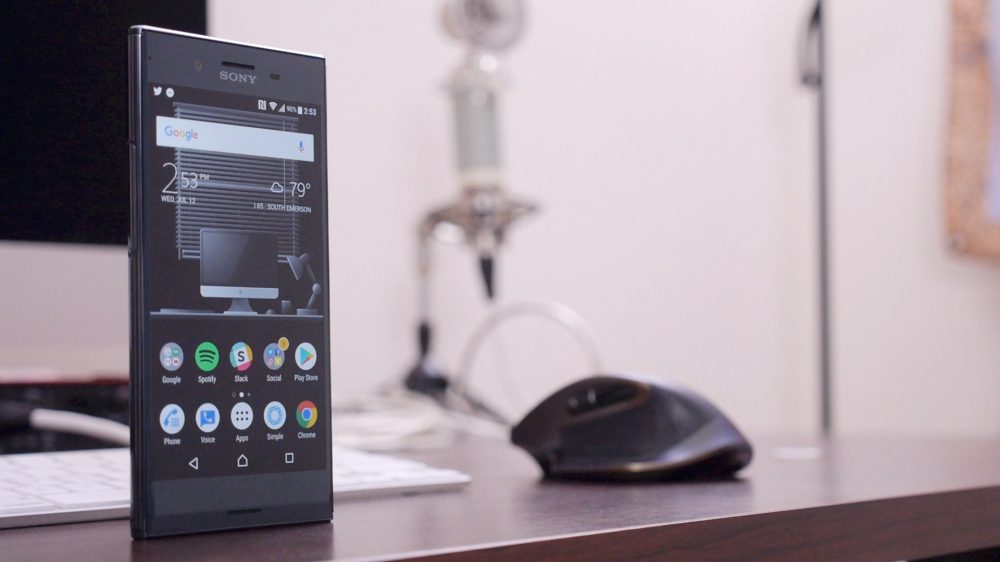 There’s a small notification LED next to the camera and proximity sensor up front, and sitting above and below the display are front-facing speakers. Especially after HTC ditched its traditional BoomSound layout in favor of a tweeter/subwoofer combo, this is definitely a welcome feature, and easily justifies the XZ Premium’s huge vertical bezels … at least, it would if the speakers didn’t sound so disappointingly thin and quiet. It’s definitely not my favorite listening experience, but at least you won’t accidentally block the sound with your finger.

Along the left side of the phone is a slide-out tray with two card slots; one for a nano SIM card, and the other for either a second nano SIM or a microSD card, depending on your needs. I love that the tray has a notch for your fingernail rather than requiring a SIM ejector tool, but one annoyance is that the cards are not hot swappable; the Xperia XZ Premium will reboot every time you pull out the tray. In fairness, most people probably won’t be pulling out their SIM and SD cards enough to be affected by that, but it’s worth noting regardless.

The power button sits along the right side of the frame, directly under the volume rocker. It’s placed conveniently right where your thumb naturally sits when holding the phone, but it’s also home to my biggest frustration with the phone.

In most versions of the Xperia XZ Premium, a fingerprint sensor is hidden underneath the power button, but Sony has disabled the feature in US models. Some users have reported that flashing the international variant’s ROM will enable the fingerprint sensor, but it’s absolutely ridiculous for Sony to sell such an expensive phone in the US without such an essential feature — especially when even the sub-$100 Moto E4 I reviewed last month has a fast and accurate sensor. 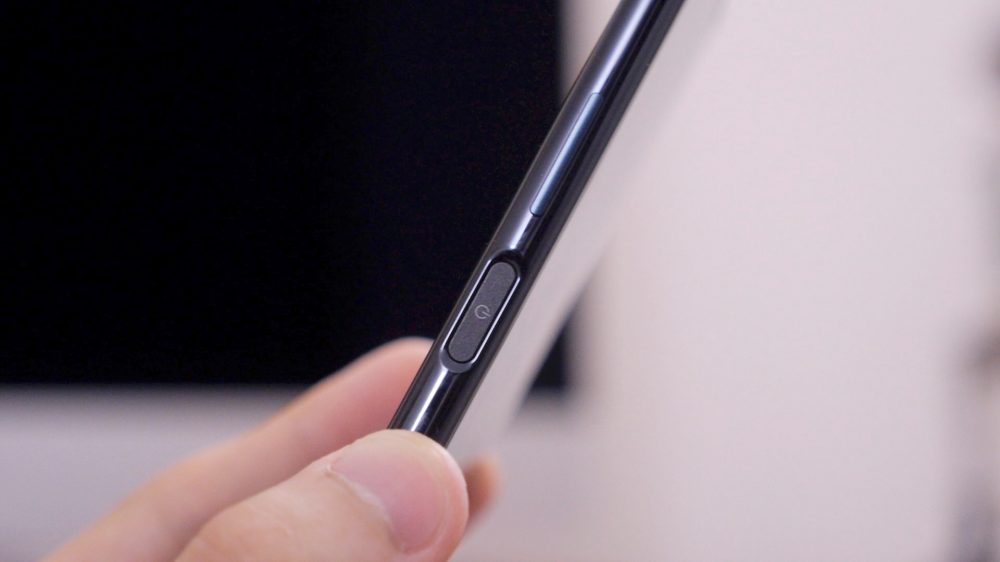 On the bright side, the XZ Premium still has some of the best specs currently available. It’s powered by a Snapdragon 835 chipset, an Adreno 540 GPU, and 4 GB RAM. In addition, the XZ Premium is rated at IP68 for dust and water resistance, and supports the Bluetooth 5.0 and USB 3.1 standards.

Of course, the main attraction of the Xperia XZ Premium is its 5.5-inch IPS 4K display. At 3840×2160, it’s incredibly sharp with over 800 ppi, and resolution isn’t the only thing it does well. The XZ Premium gets very bright and has fantastic viewing angles. It also uses Sony’s BRAVIA display tech for a wide color gamut — the color reproduction looks good by default, but you can tweak the white balance and color profile in the settings to easily get a more vivid or color accurate display.

Sony’s software runs over Android 7.1, and thankfully its customization is fairly light. The home screen launcher still swipes over to Google Now, though you do lose the Pixel Launcher’s long-press app functions, as well as the swipe up gesture to access the app drawer — there’s the old-fashioned button taking up space in your dock instead.

There aren’t many pre-installed apps beyond Sony’s own, and a lot of those are actually useful. I don’t personally have any use for Lifelog or the redundant email app, and it’d be nice if you could uninstall the PlayStation app for Xbox owners or non-gamers, but Movie Creator is a decent app for making video highlights to share on social media, and AR Effect is a great way to demo the powerful Snapdragon 835 inside. 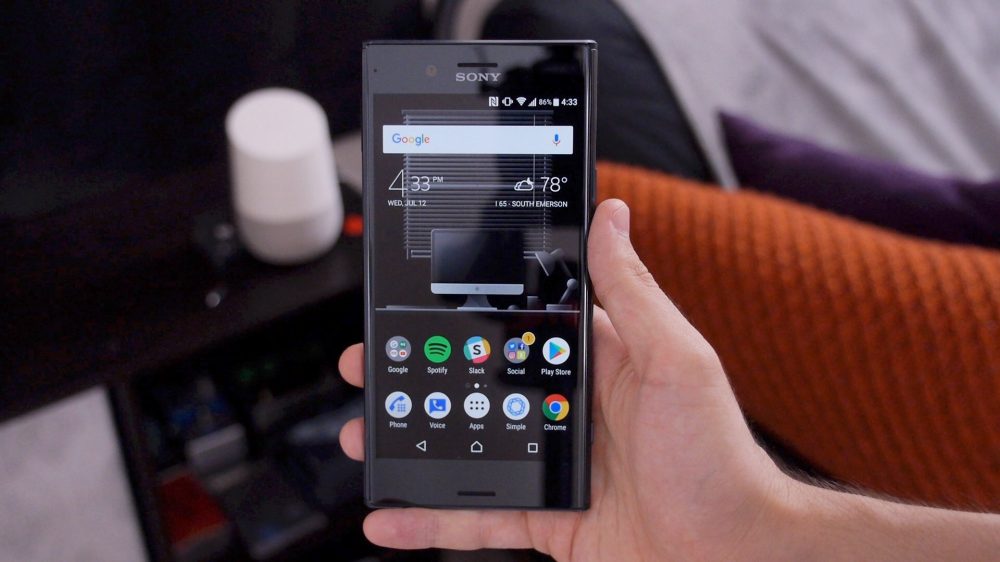 There really isn’t much to knock about Sony’s software overlay, though nothing about it feels particularly special, either. What is nice is just how effortlessly the Xperia XZ Play breezes through anything you throw at it. Switching apps is just as quick as on the OnePlus 5 (which has twice as much RAM), and even playing around in AR can’t trip it up.

What’s even more impressive is how good the battery life is. I was expecting to have to stay close to a wall outlet or battery pack at all times because of the 4K display, but the 3230 mAh battery is still easily able to give me four to five hours of screen-on time, and often times even more.

That’s not hugely better than other flagships like the Galaxy S8 and HTC U11, but given how many more pixels the XZ Premium has to push, it feels a lot more impressive. When it comes time to charge the phone, it doesn’t have wireless charging despite a glass back, but it at least supports Quick Charge 3.0.

Sony manufactures the imaging sensors used in nearly every smartphone on the market, so it’s not unreasonable to expect a great camera experience from its own phone, but in my experience … it’s good, but not great.

Images from the Xperia XZ Premium’s 19MP sensor are pretty sharp, and the shutter speed is quick enough to easily stop moving objects like streams of water for a clear shot. When Superior Auto mode isn’t enough, you can switch to manual shooting and gain a few helpful controls, but no matter what mode I shot in, I couldn’t shake the feeling that the photos I was taking always looked undersaturated and lifeless.

In fairness, I’m used to the cameras on phones like the Galaxy S8 that have a tendency to oversaturate, so I may just be having a visceral reaction to something that’s just different, not worse, than what I’m used to — but most Android users are used to Samsung’s oversaturated photos too, so they’ll likely have a similar experience.

I’m also really not a fan of the camera app’s layout. If you want to go from shooting photos to videos, there’s no persistent video button like on a lot of other phones, you have to switch to video mode first. If you want to shoot 4K video, you’ll need to switch to a different video mode. For casual shooting the extra swipe or two isn’t a big deal, but in fast-paced environments there’s a good chance those few seconds of finding the right shooting mode could cost you the shot.

On the bright side, I absolutely adore the XZ Premium’s two-stage camera button. Sony’s been doing this for a while now on its Xperia series, and it never stops being useful and convenient. You can use it to quickly launch the camera (even with the screen off), focus on a subject, and capture a photo. It immensely improves the shooting experience on the Xperia XZ Premium, and it’s a feature I wish were on every smartphone. 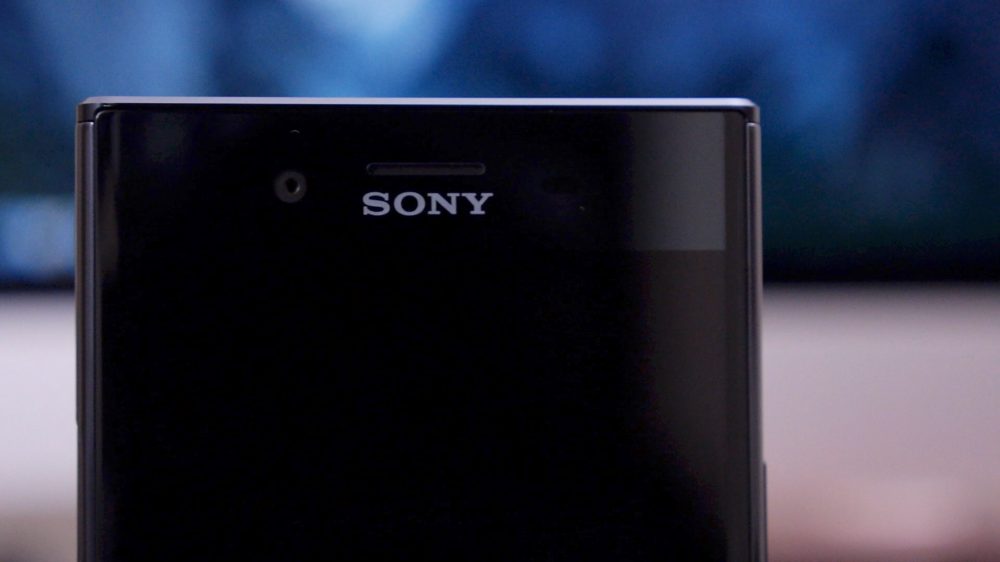 High-end specs and a 4K display don’t come cheap. At $800, the Xperia XZ Premium is one of the most expensive flagships on the market, and the lack of a fingerprint sensor in the US model is a serious blow when so many functions of Android depend on it, from lockscreen security to banking apps, Play Store purchases, and apps with sensitive information like authenticators and password managers.

Still, if you can live without a fingerprint sensor (or if you live outside of the US), the Xperia XZ Premium still has a lot to offer. Its build quality is on par with (and arguably better than) the best from Samsung, LG, and HTC. The design is gorgeous, performance is wicked fast, and of course you get the most pixel-packed display on the market, along with water resistance, front-facing speakers, and the convenient camera button.

A lot of people still aren’t convinced by 18:9 (2:1) displays and curved glass — if you’re among that group, the XZ Premium is about as good an alternative as it gets.