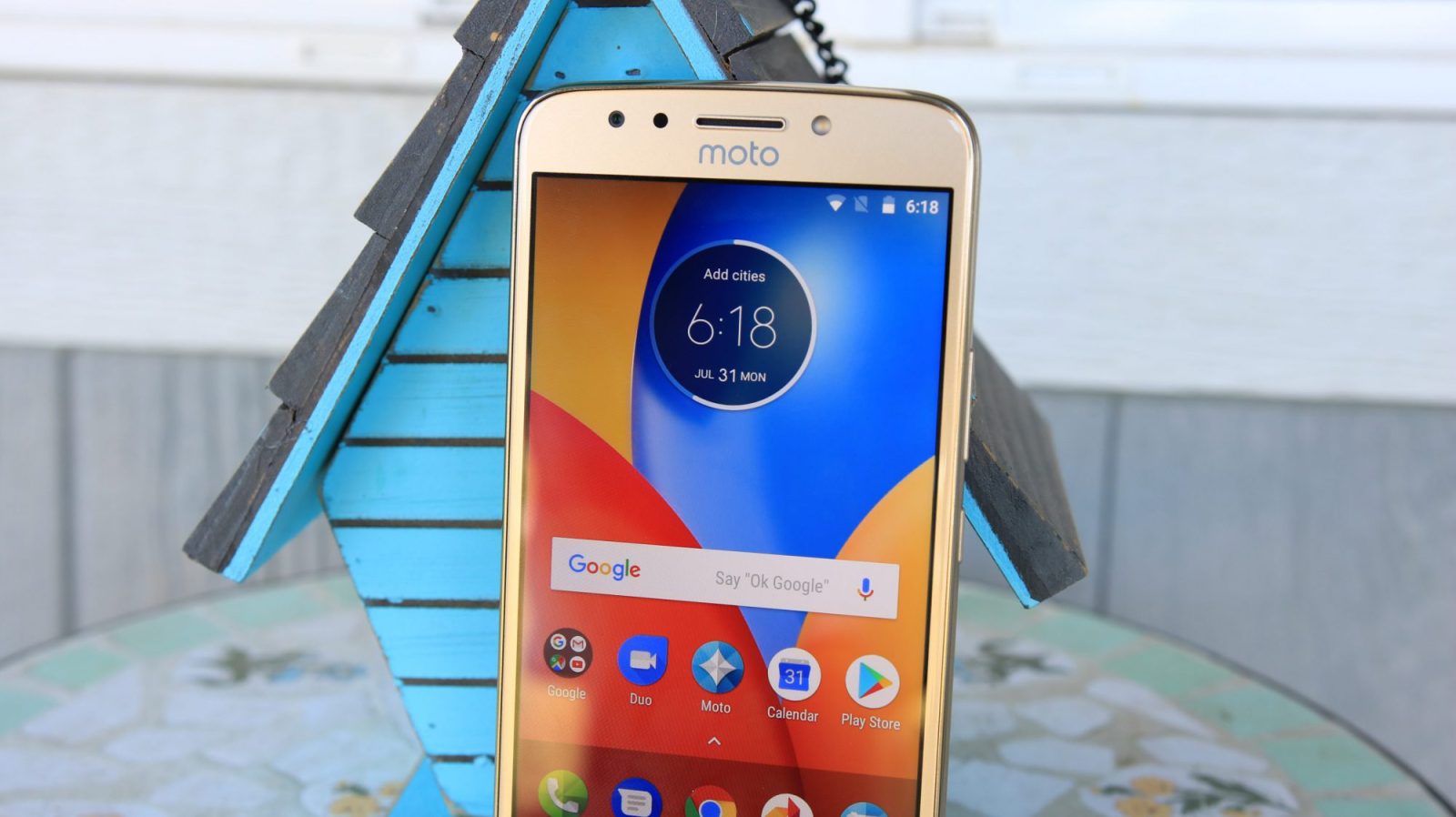 Last year, Motorola’s Moto Z Play was considered one of the best phones on the market for crazy long-lasting battery endurance. Unfortunately, as we now know, Motorola dropped that famous battery performance with this year’s Z2 Play.

Thankfully, for those that might need that battery capacity, the company announced availability for the Moto E4 Plus here in the United States. And while the device may not be nearly as powerful or full-featured as its Z series siblings, the long-lasting battery just might be reason enough to pick it up.

If you’ve seen a Motorola phone from 2017, then you’ve also seen the E4 Plus. Motorola has been pretty consistent with its design language since the original Moto Z and Z Force, and while that may make things a bit boring from an aesthetic point of view, it does bring some nice cohesion to Motorola’s ever-growing product offerings.

The Moto E4 Plus is built similarly to the regular E4 that we previously reviewed, and as such, the phone features a metal frame inside for a sturdy feel in the hand. The outside of the phone is made of plastic, and while it’s not the most premium-feeling in the world, this is to be expected considering the E4 Plus’s price. The E4 can be quite slippery in the hand at times, and while I never found it to be too much of an issue, you can always thrown on a skin or case if it bothers you too much.

The power button and volume rocker on the right side of the E4 Plus feel surprisingly clicky, and the front-facing fingerprint scanner works just as fast as my Google Pixel running Android O. Near the top of the phone is the earpiece for phone calls, but this also doubles as a front-facing speaker that sounds way better than expected. Bass levels aren’t the punchiest around, but volume levels get more than loud enough for enjoyable watching of videos and listening to music.

A microSD card lies underneath the removable back plate to increase the internal 16 or 32GB of storage up to 128GB. A microUSB port is used for charging the phone, and while I would have preferred to see USB Type-C, most people interested in buying the E4 Plus are likely more familiar and comfortable with microUSB anyway.

The Moto E4 Plus has the same screen resolution as the regular E4 at 1280 x 720, but it does increase the size of the screen from 5.2-inches up to 5.5-inches. The LCD panel gets respectively bright and produces good colors, but I noticed that looking at the display from an angle adds a warm or cool tint to everything depending on how you’re viewing it.

This discoloration is only really noticeable if you’re looking at the screen from a far-off angle, so it shouldn’t prove to be that much of an issue in day-to-day use. However, it’s still worth mentioning as Motorola clearly needed to make cuts somewhere in order to get the price of the E4 Plus to where it is.

The Moto E4 Plus runs Nougat 7.1.1, and software is something that Motorola has been better than average at recently. The Android experience on the E4 Plus is incredibly close to stock, including features like your Google Feed cards on your left-most home screen, swiping up to access your app drawer, and even the Pixel animation when pressing the home button. Although they don’t drastically change the user experience, they’re noticeable and make using the E4 Plus that much more enjoyable. 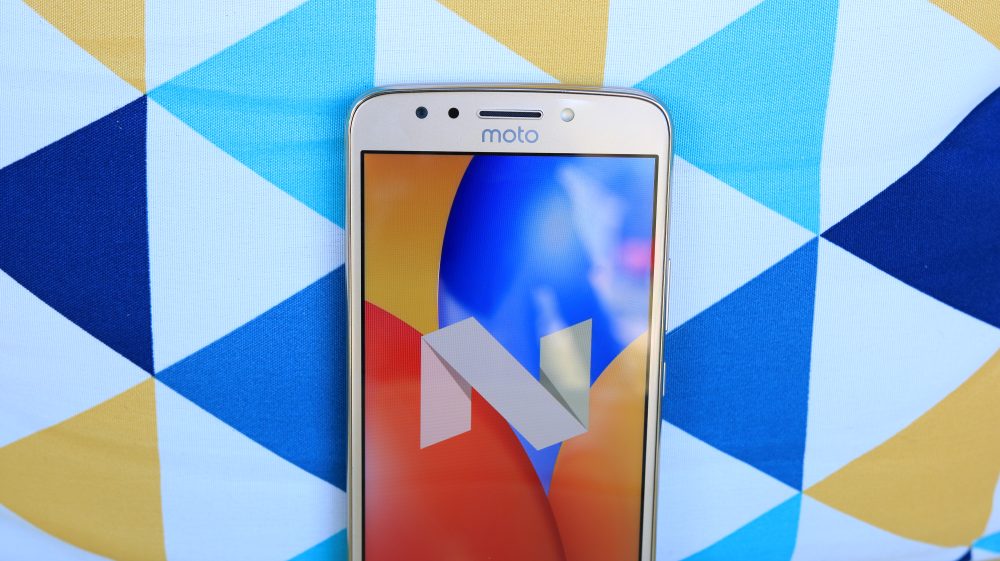 In addition to these little touches, the E4 Plus also comes outfitted with the Moto app. Here, you can turn on features for using the single home button in place of the three on-screen ones, shrinking the display for easier one-handed use, and more. You won’t find all of the same gestures that are included with more expensive Motorola phones (RIP chop-chop for flashlight), but there’s still enough here to keep you entertained.

Aside from the Moto and FM Radio app, there aren’t any unnecessary pre-installed applications to bog-down the E4 Plus. The Snapdragon 427 processor and 2GB of RAM keeps everything moving along just fine, and this combo provides ample power for social media use, browsing the Web, and even some light gaming. Devices like the Google Pixel and Galaxy S8 will obviously run faster than the E4 Plus, but for its price, the performance this phone manages to eek out is very commendable.

On the back of the E4 Plus is where you’ll find the main 13MP camera, and as you’d probably expect from a phone of this caliber, images turn out looking alright at best. Photos will be fine for uploading to social media, but if you try to do anything other than that, you’ll start to really notice the camera’s weaknesses – including poor low light performance and colors that often feel muted.

The 5MP front-facing camera works good for selfies, but again, low-light is its Achilles Heel. Thankfully, Motorola has included a flash to accompany the selfie cam to help out in dark environments.

Motorola’s camera app is clean and easy-to-use, and the addition of a manual mode allows you to quickly tweak your white balance, ISO, aperture, and focus. Also present in the app is a built-in QR/barcode scanner. Simply open the camera, put a code in front of the viewfinder, the E4 Plus will automatically scan it.

Without a doubt, where the Moto E4 Plus shines the most is battery performance. The 5,000 mAh unit is a huge step up from the E4’s 2,800 mAh pack, and when you combine that large capacity with a lower res display and efficient processor, the result is battery life that can easily last through two full days of regular use. The E4 Plus is a bit on the hefty side due to that large battery at 181-grams, but this is a very small price to pay for such solid endurance.

The 5.2v charger doesn’t provide the same amount of charging speed that you’ll find with more expensive options, but considering how infrequently you’ll be charging the E4 Plus, this shouldn’t be an issue at all. 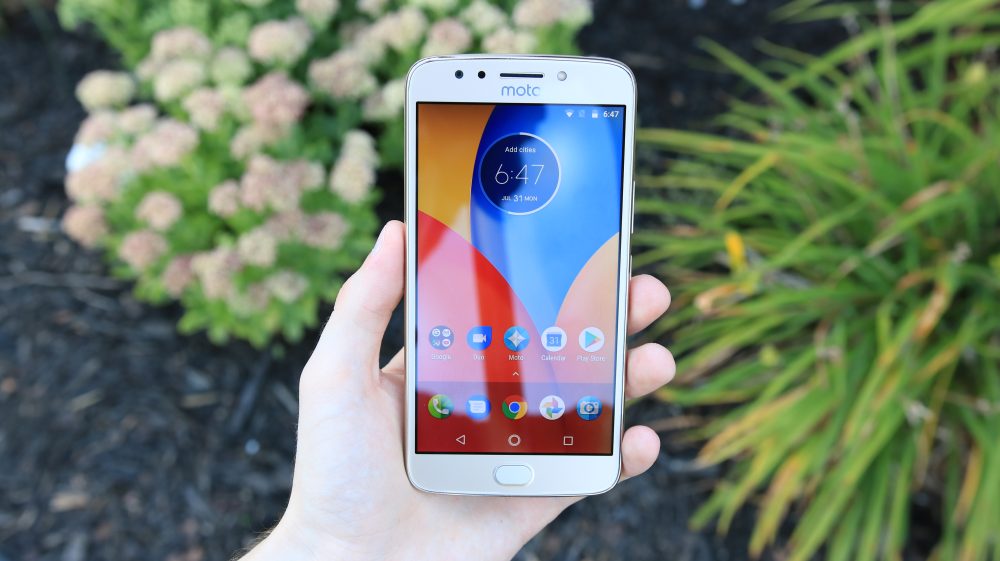 The Moto E4 Plus will be made available for purchase starting on August 3, and you’ll be able to pick it up from a wide variety of retailers and carriers. With a starting price of $180, the Moto E4 Plus sits smack dab in the middle between the regular Moto E4 and Moto G5 Plus.

The G5 Plus still offers a better overall experience if you’re willing to pay an additional $50, but whether you want a phone for under that $200 mark or just want something that don’t have to throw on the charger every night, the E4 Plus stands out as a great option for both scenarios.