Back in May, a G Suite product roadmap revealed that Google Calendar on the web was due for a revamp in late 2017, while we saw testing of that Material redesign last month. Meanwhile, Gmail is slated for a similar redesign that also adds features like Smart Reply, Snooze, and more to the web.

The upcoming features to Gmail were mentioned as part of the broader machine intelligence found within G Suite. For the email client, Google noted that the Smart reply feature that provides automatic responses was also coming to the web after launching at I/O for mobile.

Snooze, another Inbox feature, is also making its way to Google’s main email client. It will allow users to temporarily remove a message and have it return at a set time. For businesses, Google noted that users could snooze an email sent to multiple people and only have it return if nobody else replied to the message. Lastly, smart grouping works by coalescing similar messages together. 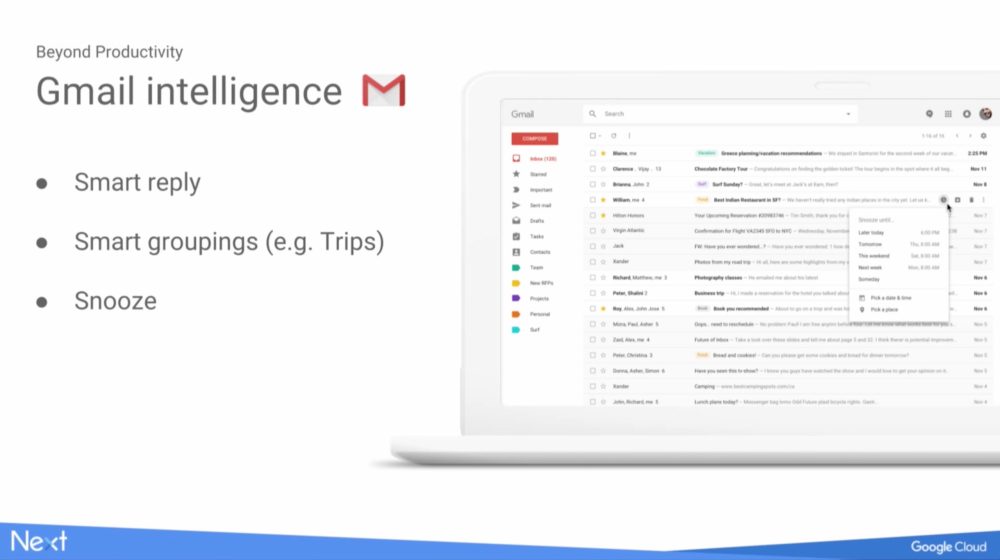 Meanwhile, a slide of a revamped Gmail web interface was also shown. Adopting Material, this design is not too different from Inbox with a large sidebar of labels and a bigger search box up top. More interesting is how hovering over an email in the main inbox view shows some actions that users can quickly take on a message, like Snoozing, archiving, and deleting. This seems to replace — or at least hide — the row of similar buttons up top.

Unfortunately, unlike other products on the roadmap, Google did not a provide a timeframe for when this redesign and new smart features are coming to Gmail on the web.