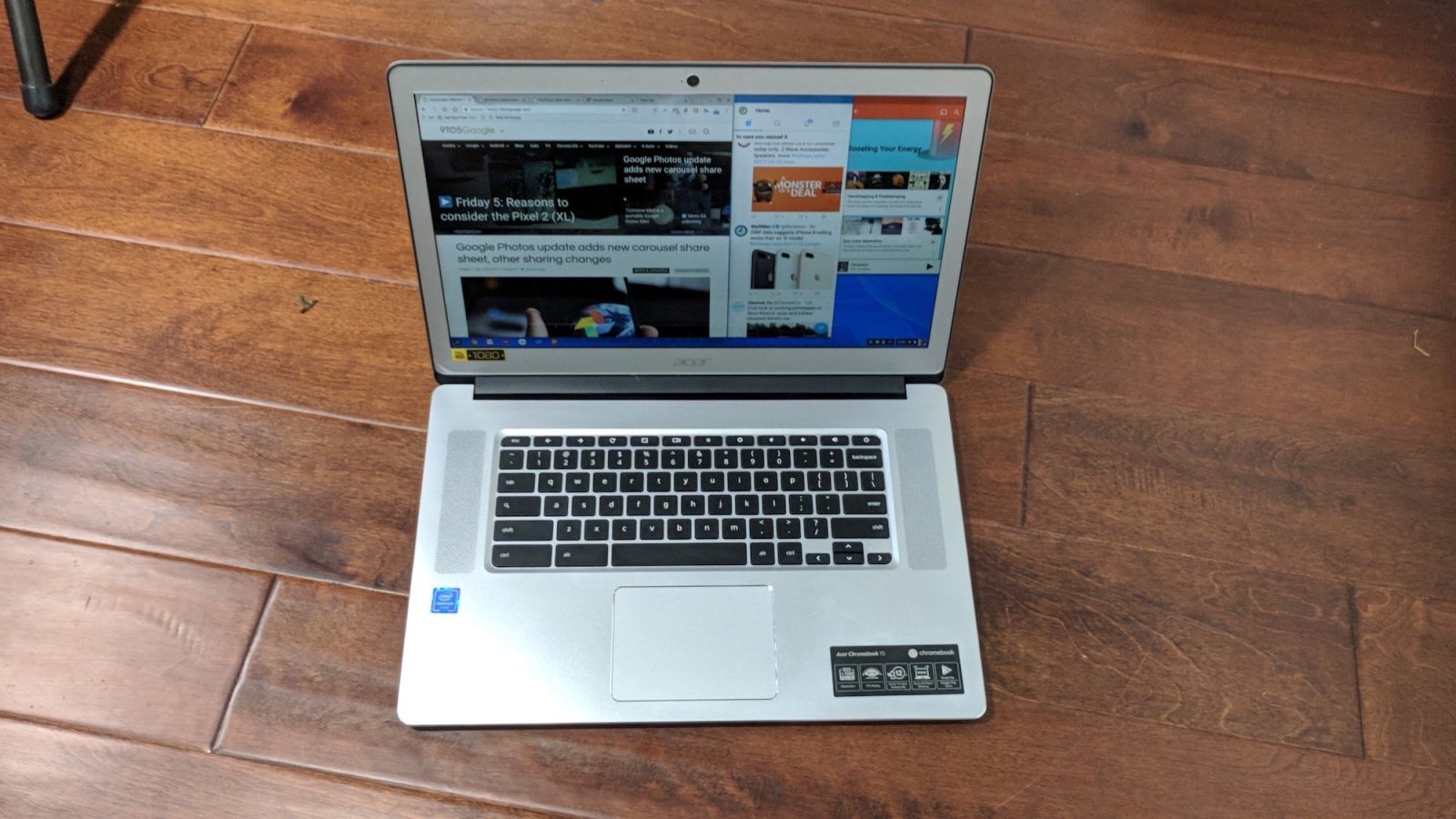 Acer has been selling its Chromebook 15 in a variety of configurations since January of 2015. In fact, they currently list 8 different varieties on the Acer online store and somehow more at Amazon.  There are bare bones versions of the Acer Chromebook 15 for as little at $179 at Walmart, but what we’re here to talk about today is a relatively high-end model affectionately named the “CB515-1HT-P39B.”

Most important, is its aluminum shell or at least half the shell, which your friends, if their vision isn’t great, might mistake for a 2015 MacBook Pro. It also has 2 charge capable USB-C ports on either side with 2 legacy USB-A ports, as well.

I took my first look at this year’s model at IFA in August and last week Acer sent me one for review. Here are my thoughts after a week.

The overarching problem for folks who want a good Chromebook is that there are a ton of $200 low-end Chromebooks and of course Google’s $1000 Pixelbook at the top but not a whole lot in between for people who can’t drop MacBook type cash. Samsung’s Chromebook Pro and HP’s Chromebook 13 come to mind but what if you want a 15-inch display that can put 2 browser windows side-by-side?

Acer is hoping to close that gap with the first of what I assume will be will be many more aluminum Chromebooks. As far as the aluminum is concerned, I’m pretty sure the bottom is plastic. But I’ll digress here. It feels very solid for a $400 computer.

One nicety about this Chromebook is that it has Android apps right out of the box so you don’t have to install updates to get that functionality enabled. The bad news is that many, if not most apps don’t yet work properly on any Chromebook screen, let alone a 15-inch 1080P display. The ones that did work here are buggy and even cause some crashing so we’re definitely still in the beta world of Android apps on Chromebooks.

Speaking of display, the 15.6-inch 1080P IPS touch display is very nice.  It has solid angles and side by side window browsing is very possible – or have a few Twitter/Hangout windows next to the browser window as well. Colors don’t pop like they do on a high-end PC or Mac but seem accurate. The bezels are big all around, but they especially scream low-cost laptop on the bottom, even if they are made out of aluminum. It is a touch display but the screen only bends 180 degrees so you can’t use it like a tablet or a tent for watching videos. 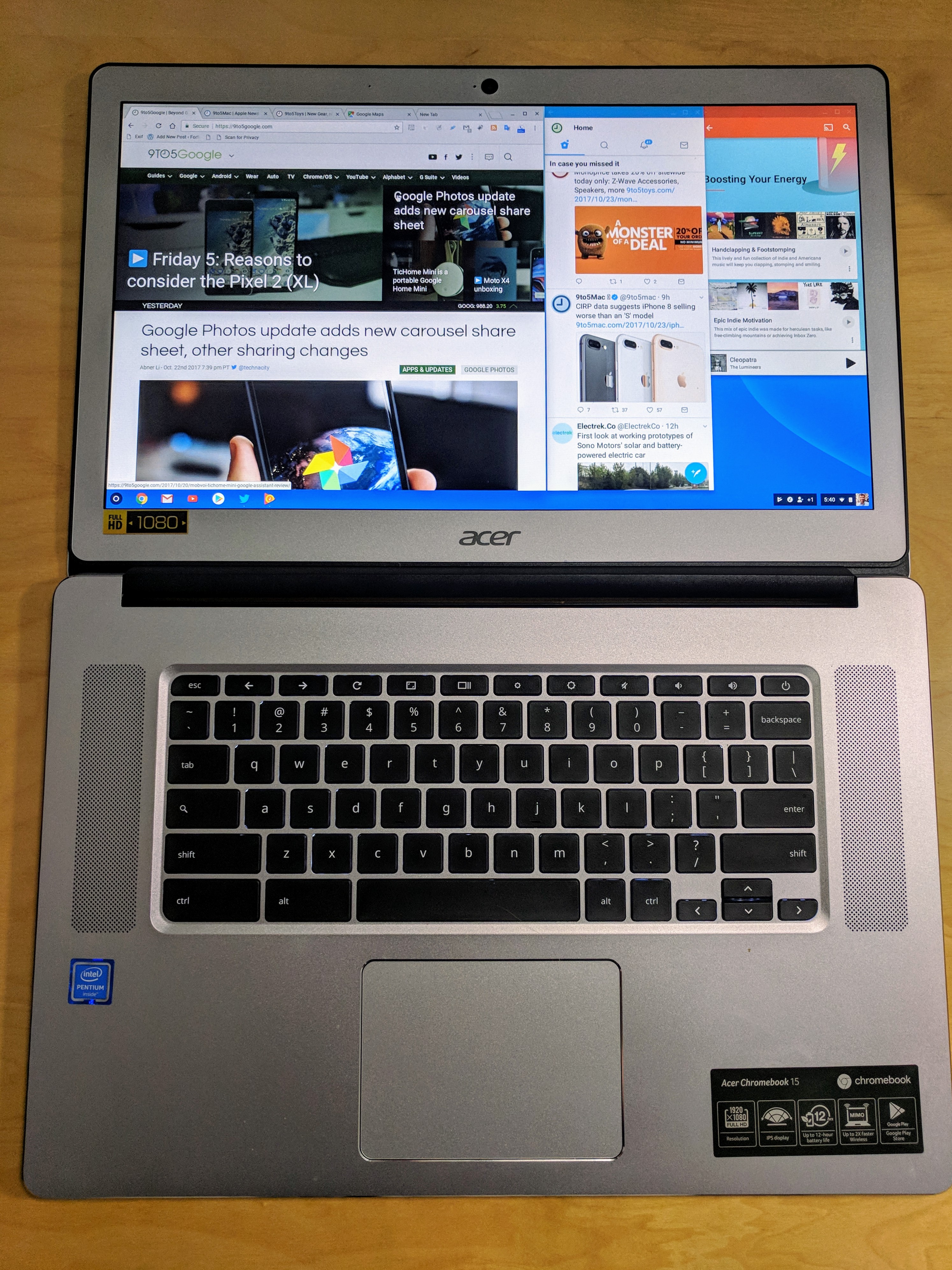 The keyboard is backlit and has plenty of movement and the keys are spaced nicely apart. Very similar to older Mac laptops (pre-Butterfly keyboards) but perhaps a little bit softer. The trackpad has worked fine for me and it is again just a few years behind what you’d find in a MacBook. I’d take both the trackpad and mouse over the oversized trackpad and no-movement keyboard of Apple’s current MacBooks.

There are shiny chamfered edges around the keyboard and trackpad which ads to the perceived build quality. The stereo speakers, on either side of the keyboard sound very good for a Chromebook (also helps that this is fanless).

I don’t have a router to test this but big downloads were as fast as I’ve seen on my wireless network at home. This is a step up from other Chromebooks I’ve used where the wireless seems to be a few generations behind current in speed and signal strength.

At under 4 lbs and .7 inches thin, this machine is about as small as you’d expect but those big bezels around the screen make this feel almost like one of those 17-inch laptops. It barely fit into the case built for my 15-inch MacBook laptop with is only a few millimeters thinner

Boo. For $400, I would have at least expected a  i3 but not the 1.1Ghz quad core N4200 chip in here. In real life usage it seems fine for most mundane tasks but it certainly won’t mine any Bitcoins. Acer puts Core i5s in similar plastic Chromebooks so if you want more raw power look elsewhere.

It comes with a solid 4GB of fast RAM which is about what you’d expect from a $400 Chromebook. The SSD is also on par at 32GB.

Battery life is quoted at 12 hours which seems on par. I had no trouble using it a whole 8 hours day. It also charges in about 2 hours with the included USB-C plug. 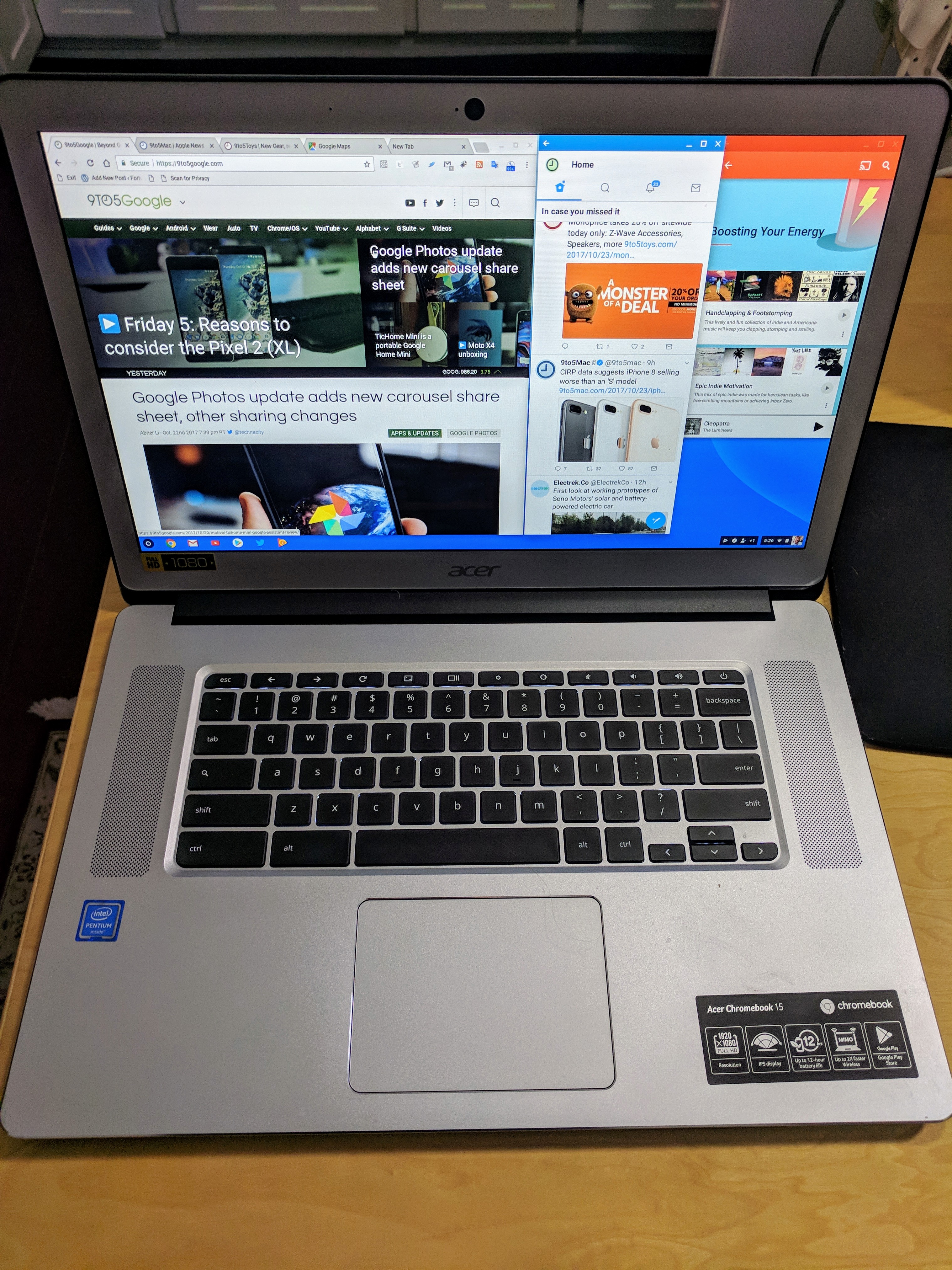 I’m not going to lie. I had some trouble coming up with an interesting angle for this Chromebook 15. It is shiny on the outside but pretty lackluster on the inside. It is pretty big, but not heavy to carry around. Its port layout (USB-C and USB-A on both sides), headphone/mic, and microSD are as perfect as you could hope. The only thing I think I would add is HDMI out, but a USB-C to HDMI dongle is pretty easy to find.

Typing and navigating with the trackpad is great. The webcam is solid with HDR imaging and 720P resolution. Hangouts and Skype calls are nice. Tons of tabs on multiple Chrome browser windows? Not a problem. Speakers? Sound really good.

Google seems to be trucking along with Chrome OS quite nicely but this isn’t a monumental upgrade along the evolution of Chrome OS. It is however a very solid, good looking computer that will, like all other Chromebooks, improve significantly over time.

Right now, a week after launch, you can buy these at eBay and direct from Acer for $399.99