With Amazon announcing that it would begin selling Chromecasts, it seemed that the retailer and Google were finally de-escalating long-running tensions. However, it seems that a deal hasn’t been reached in time as Amazon is telegraphing the impending 2018 block of YouTube to all Fire TV users.

The latest salvo began with Google continually removing YouTube access from the Echo Show. Amazon tried to circumvent these efforts to no avail, with Google taking down the latest implementation in early December, while also announcing that YouTube would be removed from the Fire TV line of sticks and pucks.

Google began alerting users of the streaming devices that they would no longer be able to access YouTube beginning January 1st.

However, later in the month, Google noted “productive discussions” with Amazon following the return of Chromecasts to the store.

However, it appears that this was for naught, with Fast Company today spotting the below message on the Fire TV’s YouTube client: 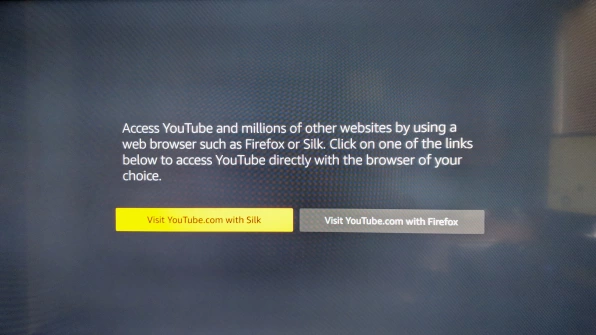 Amazon has gone ahead and disabled the YouTube app ahead of the impending January 1st deadline. The company is readying users for the shut down by directing them to visit the YouTube site directly through either the Silk browser or Firefox.

This comes ahead of the new year deadline imposed by YouTube, and suggests that the two companies were not able to reach an agreement.

Google has long complained about hardware unavailability and the lack of Google Cast support in Prime Video. While Amazon added the Chromecasts, many Nest products are still missing. Furthermore, a search on Amazon this morning reveals that the Cast devices are still not available for sale.

A deal might still be possible, but it’s unlikely to occur anytime soon given this preemptive move by Amazon to alert end users. Notably, the retailer might venture into making a YouTube competitor, according to recent filings, in light of this entire feud.