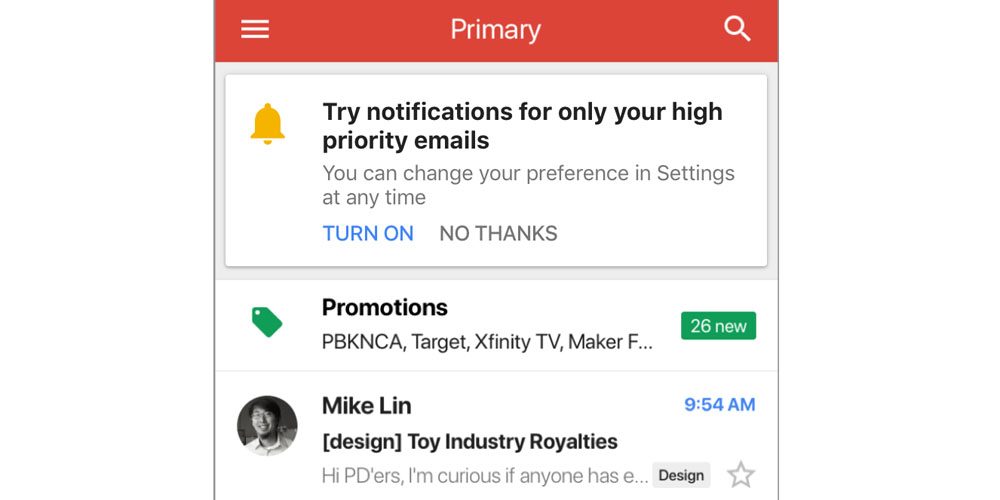 My iPhone feels like a much calmer device since I went on a notifications diet, but if you can’t switch off email alerts because you need to know when important ones arrive, Google thinks it may have the solution. It’s iOS-only for now, but is coming ‘soon’ to Android …

The iOS version of the Gmail app now uses AI to figure out which emails are most important to you, and allow you to switch off notifications for the rest.

Notifications are only useful if you have time to read them—and if you’re being notified hundreds of times a day, chances are, you don’t. That’s why we’re introducing a feature that alerts you only when important emails land in your Gmail inbox, so you know when your attention is really required.

These notifications leverage Gmail’s machine learning and artificial intelligence capabilities to identify messages you may want to read first.

Interestingly, Google has launched the feature in the iOS app ahead of Android, but it says the feature is coming ‘soon’ to Android.

If you haven’t already received the update, the company says you should see it in the next 1-2 days. To switch on the feature, go into the Settings menu of the app, select Notifications and then select ‘High priority only.’

The update follows an earlier one also designed to help manage emails, offering a snooze feature.