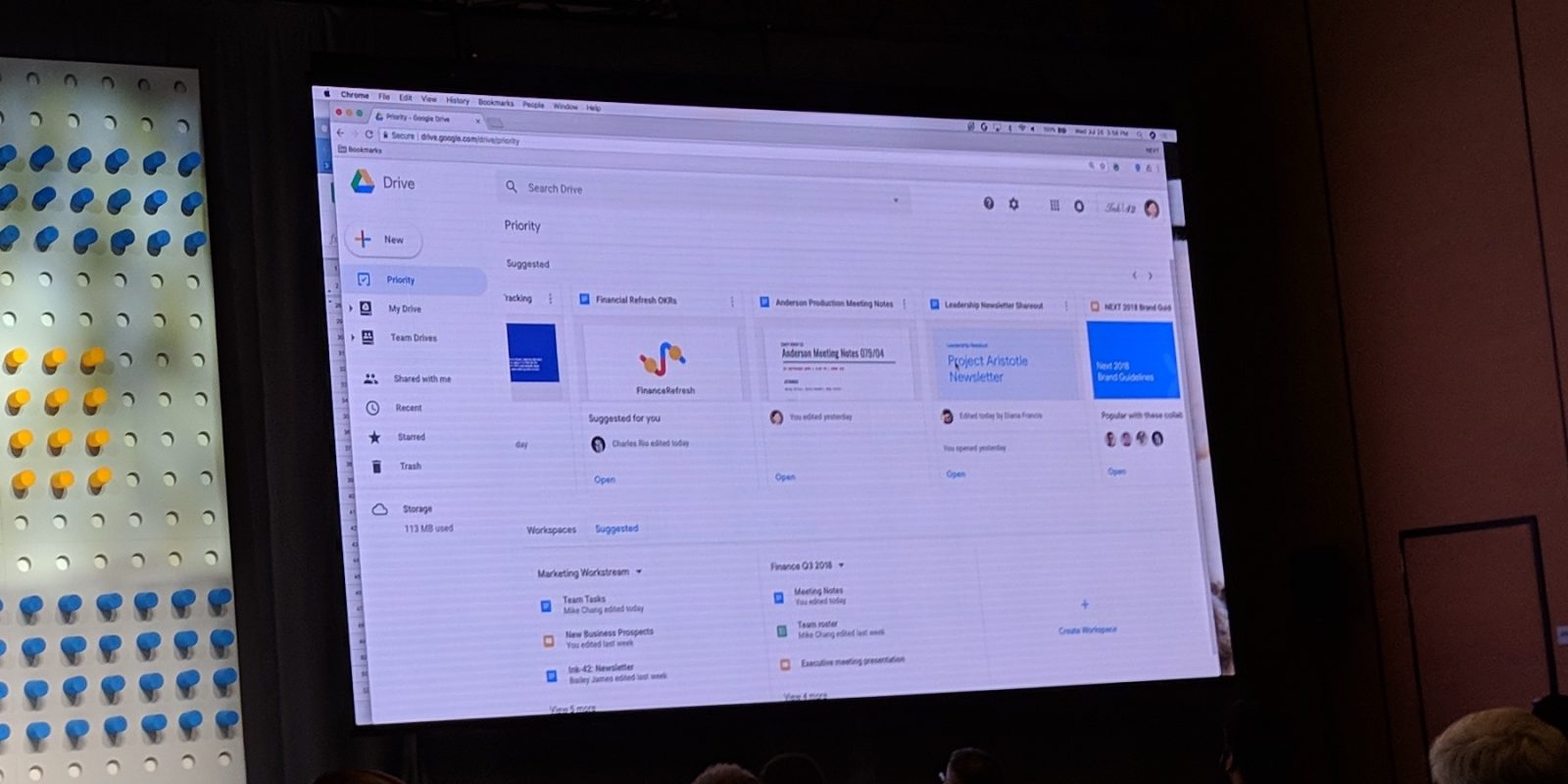 As Google moves to an AI First world, all of its products are being infused with machine learning smarts. Nowhere is that more apparent in G Suite as Google tries to differentiate its Cloud offerings. Google Drive is working on a new “Priority” view that features a Feed, as well as user-curated Workspaces.

Google has been working and testing this feature for the past two years and is a part of making the future of productivity more focussed and less distracting. There are two parts to this new page accessible from Drive’s navigation drawer.

“Suggested” is up top and it features a carousel of cards ranked in importance from left to right. Inspired by the current “Quick Access” feature, each card is a file that Google’s machine learning models have personally selected for you based on a number of factors, with each featuring a button to take action.

For example, files that have recently been commented on will appear here, with that message noted and the ability to quickly reply. If you open a particular file for a weekly meeting, it will appear here thanks to time-based suggestions.

The page is drawing information from Drive interactions like what members of your team are looking at, recurring Google Calendar events, and even Gmail. For instance, files in active email thread will be suggested in the feed. 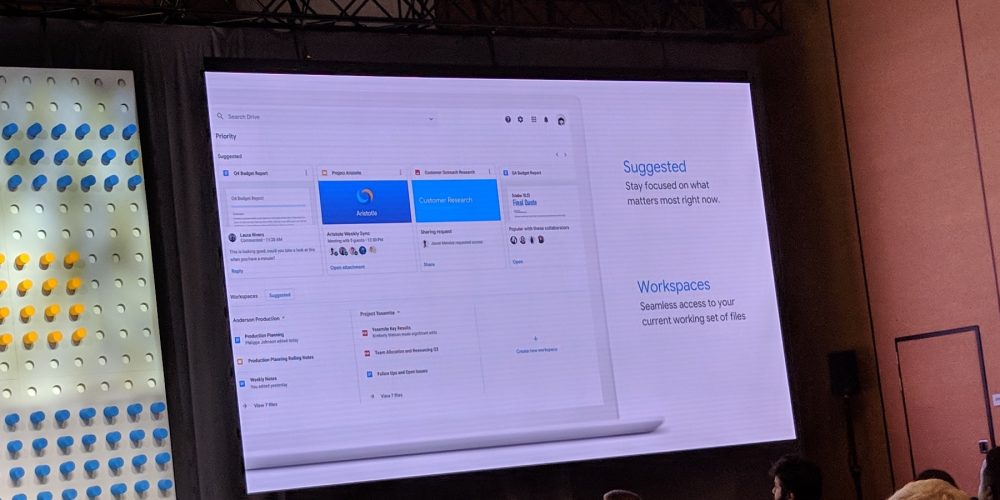 To complement this predictive layer of what Google thinks users are interested in is a feature called “Workspaces,” where users can create groups and pin the specific files they want. It is ideal for active projects, or files frequently viewed as part of a weekly meeting.

Different from a folder, any file you have access to can be added, with Workspaces ultimately being “location agnostic.”

There are also intelligent features here, with Drive suggesting “Suggested Workspaces” that would be useful to have immediate access to. Suggesting what files to pin here, Drive looks at title, author, and topic. 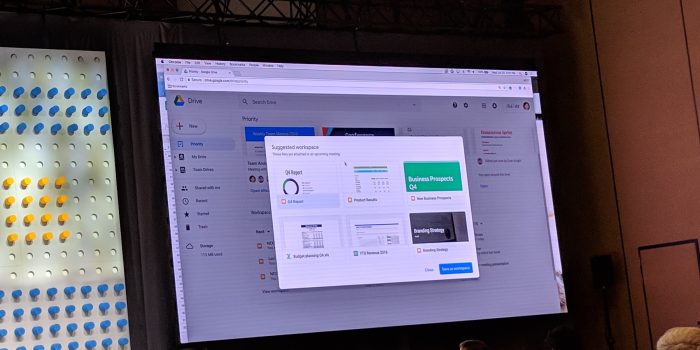 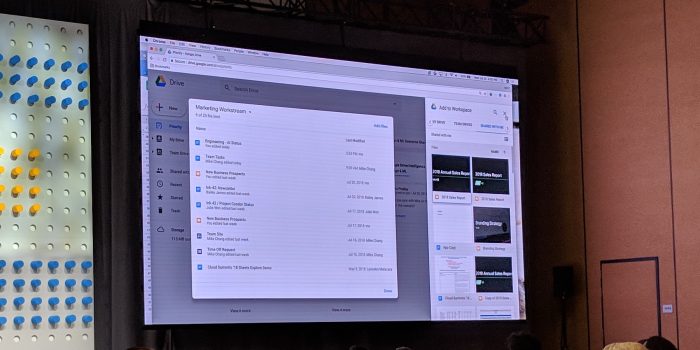 Update 7/26: At another G Suite session at Cloud Next 2018, Google showed off a slide that features the likely Material Theme for Drive on Android. The app shares the same full-width search bar at the top of the screen as seen in Gmail yesterday, along with the navigation drawer to the left and profile avatar to the right.

Google was specifically showing off the upcoming Priority and Workspaces feature, with the tabs for each section using the Material Theme’s rounded tab indicators.

The most notable aspect of this design is a bottom app bar that matches the Google Material demo reel released last week. Priority is the first section, followed by Starred files, Shared with me, and a fourth, unclear “Files” tab. This design might change before Google rolls it out to users. 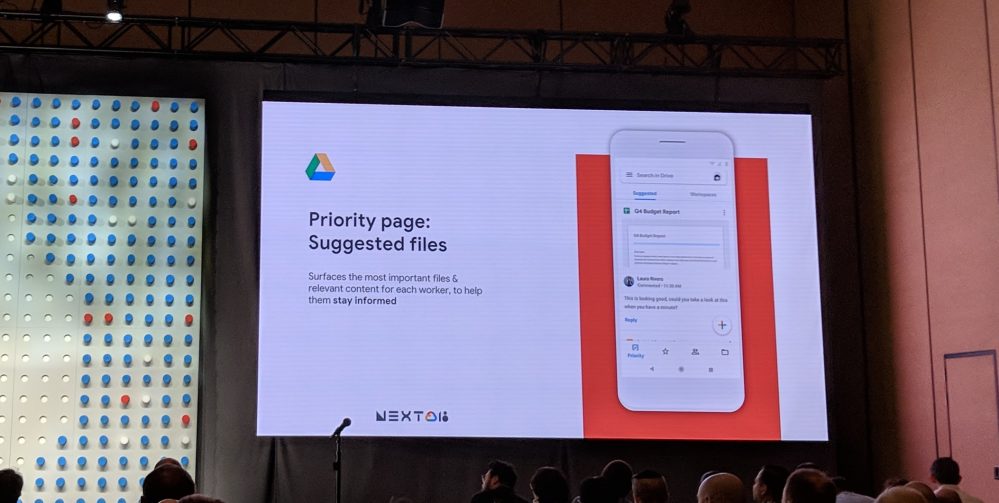