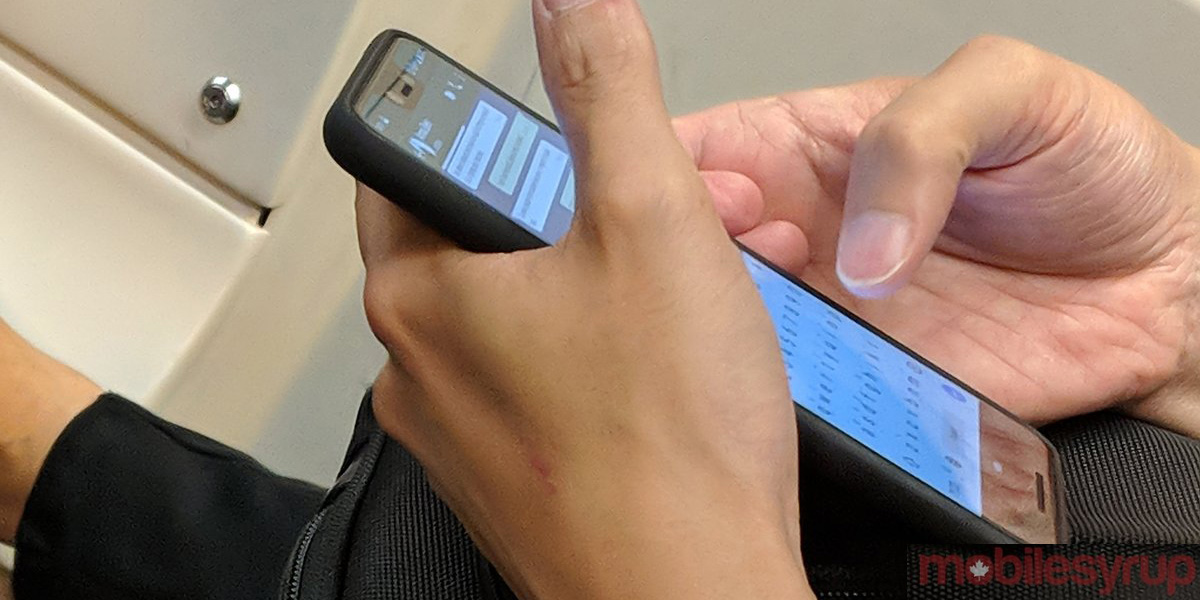 We’re likely just a couple of short months away from Google’s next Pixel launch, and as we approach the potential event, leaks are starting to come out more frequently. Today, someone spotted a Pixel 3 XL in the wild on public transit…

Not unlike the original Pixel which leaked out in a similar fashion, someone was caught using Google’s upcoming Pixel 3 XL on public transit today in Toronto. This latest leak shows off the Pixel 3 XL with WhatsApp in use. It doesn’t reveal too much, but it does confirm a couple of details.

For one, the notch is confirmed, and undoubtedly how the eagle-eyed MobileSyrup reader spotted the phone in the first place. Further, we can see just how tall the notch is and how it affects the software, as well as the chin on the bottom with its front-facing speaker. Android Pie’s gesture navigation is also present, as to be expected since it will be enabled by default on this device.

There are some interesting things going on here. The status bar definitely has something a bit odd going on. The time is on the left as is the case with Android Pie, but oddly the battery icon appears to be on the same side. It’s possible this is the work of an app or some customizations to the software that just aren’t available on other hardware, but there’s something funky going on up there.

Also worth noting here is that the device is in a case. It’s unclear if this is one of the first-party cases Google will end up offering with the Pixel 3 XL at launch, but it definitely looks a bit nicer than your typical TPU case. Finally, this leak definitely takes away from the already sketchy 6.7-inch display rumor, as unless this person has huge hands, it’s still not an absolutely huge phone.

A @MobileSyrup reader spotted this possible Pixel 3 XL photo in the wild on the streetcar in Toronto, Ontario today. Our team thinks the photo is legitimate, especially given the big notch and substantial chin. Do you think this is a photo of the Pixel 3 XL? pic.twitter.com/nPTGHmIVUO