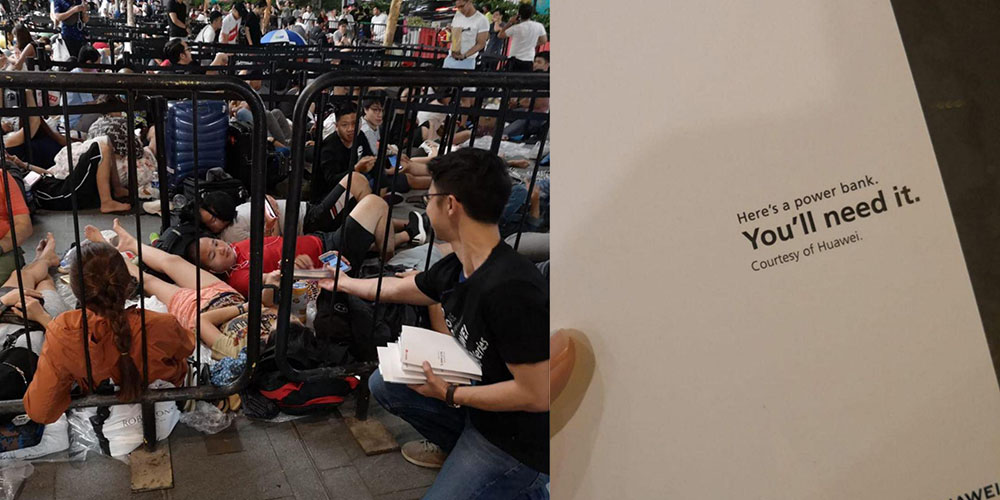 Huawei has already passed Apple in total market share, but that hasn’t stopped the Chinese giant from aggressively marketing against the iPhone. This week, as Apple’s latest smartphones launch, the company hilariously handed out batteries to fans camped outside of the company’s stores.

As you’re very likely aware, Apple’s most dedicated fans have a yearly habit of camping out overnight in front of Apple stores to get their hands on the company’s latest hardware. This year’s iPhone XS and iPhone XS Max are no different, and Huawei took the opportunity to troll Apple.

In front of an Apple store in Singapore (via Mothership), Huawei employees gave away around 200 free power banks to people waiting in line. The 10,000mAh power banks were certainly welcome for these users, but it came with the message “Here’s a power bank. You’ll need it.” The company took a clear dig at Apple’s minimal battery sizes and somewhat unsatisfactory battery life. By comparison, many high-end Huawei devices tend to offer 4,000mAh batteries and offer over a day of battery on average.

Outside of a London Apple store, Huawei employed a similar tactic. As it posted on Twitter, the company had a “Ju%ce Van” which offered drinks with “no traces of apple” and power outlets for users to charge up their depleted devices. The company also used the tweets to further tease its October 16th launch event for the Mate 20 and Mate 20 Pro.

We make juice that lasts… A #HigherIntelligence is coming. 06.10.18 pic.twitter.com/DsLZulBi1u

Hey @Daily_Express and @Daily_Star we’re heading over to give you a taste of #HigherIntelligence and get the ju%ces flowing! pic.twitter.com/f7M23A7Wpz