If you are a OnePlus 5 or OnePlus 5T user stuck on Android Oreo, then you need not worry about your piece of Android Pie. OnePlus has begun rolling out Android Pie beta builds to the 5 and 5T in China, with a worldwide download option likely coming imminently.

We recently heard that Android Pie updates were delayed for OnePlus 5/5T and OnePlus 3/3T devices. But this fresh news will be welcomed by all that were worried about further Android Pie update delays. That means we could actually see all OnePlus devices with Pie by the end of the year after all.

The report comes via Piunika Web, that shows the download weighs in at over 2GB and contains Hydrogen OS 9.0. This might not mean much to most, but Hydrogen OS is only available on OnePlus devices in China. It only differs by lacking the core Google apps and shouldn’t require too much fine tuning to port to Oxygen OS.

For those not versed in Chinese of any form, the changelog has been translated by the guys over at XDA’s forums. The changelog does mention that full-screen gestures are only available on the OnePlus 5T. If you own the OnePlus 5, then you will have to stick with capacitive touch controls. 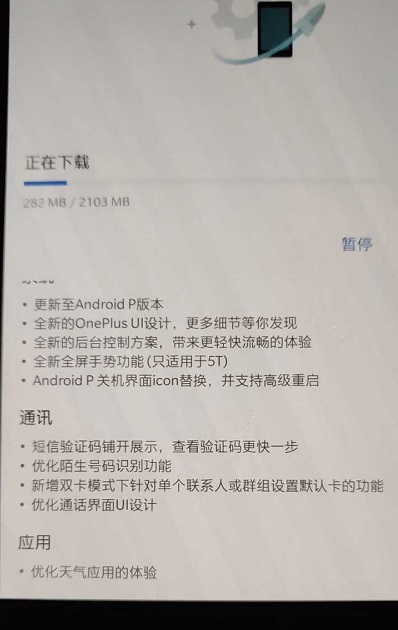 Whilst this update is currently limited to China, this beta does give us hope that we will see Oxygen OS updating to Android 9.0 Pie on OnePlus 5 and 5T devices really soon. There is no evidence that this Android Pie beta is available on Chinese OnePlus 3 and 3T devices as yet.