Chrome 72 for Android rolling out with Incognito media controls/notifications

Once every few releases, Chrome for Android hits the stable channel before the Mac, Windows, and Linux update. Chrome 72 this morning is rolling out to Android. On the security and privacy front, media player notifications for Incognito content are now masked, but this is otherwise a minor mobile release.

Media notifications in Chrome 72 will no longer feature the domain, page title, or artwork of the site that video/audio is playing from. As such, theming is disabled and users are left with just a generic bright background. Labeled as an “Incognito tab,” the system notification will just note that “A site is playing media” with a play/pause button.

This change is the latest way Google is making Incognito more private on Android. For example, the browser is grayed out with no preview in Recents, while screenshots are not permitted. Google is also A/B testing a rename of “Incognito” to “Private” browsing to determine if this change will help users better understand the mode.

During the beta, Chrome’s Settings added an interesting “Google Assistant in Chrome” menu that allowed users to enable/disable “Assistant Triggered Checkout.” There is no documentation on this capability, but it’s presumably tied to making purchases in a streamlined manner.

Long-pressing the system back button (in the nav bar) will slide up a panel of your browsing history for that tab. 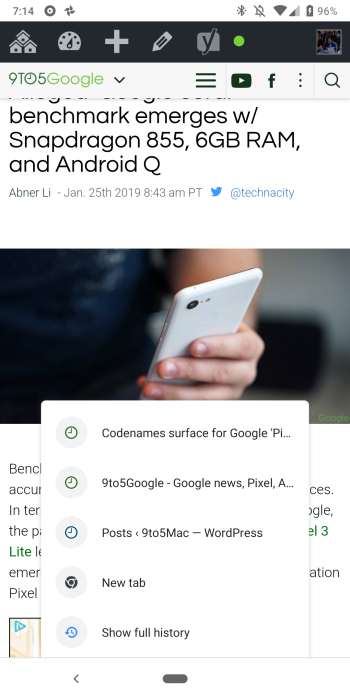 Chrome 72 for Android is rolling out now via the Play Store, with desktop and Chrome OS following next week.