Unlike past betas, Chrome 73 includes a handful of new user-facing features. The browser gains a new “Sync and Google services” section in Settings, and more features tied to signing-in with your Google Account. There are also a handful of new features for Picture-in-Picture and media playback that developers can take advantage of.

The last update to Chrome in January tweaked settings by separating Passwords, Payment methods, and Addresses into a new “Autofill” grouping. Chrome 73 is adding a new dedicated “Sync and Google services” section that lists all options related to data collected by Google in the browser. Many of the settings were previously listed under “Privacy,” with the new section already rolling out in Chrome 72. It will be widely available with this coming release.

Google is pushing desktop web apps given that they are ideal for the enterprise and work over native equivalents. The latest capability for them in Chrome 73 is a Badging API to let web app icons add a visual indicator to get a user’s attention in a dock or home screen. This includes unread counts, event types, or just a simple dot like any other native application.

Chrome 73 introduces Auto Picture-in-Picture for Progressive Web Apps “installed” on desktops. Pages will be able to automatically enter and leave PiP as users switch through different apps and tabs. Google touts this as a particularly beneficial feature for video conferencing. As of version 73, this PWA feature is only for developers and in testing as an Origin Trial.

Also in testing is a “Skip Ad” button for the video window on supported services like YouTube, and a quick way to return to the tab a video originated from right in the PiP.

Also on the media front, Chrome now supports hardware media keys to play/pause content, like YouTube. Input will be recognized whether Chrome is in the foreground or background, while developers can take advantage of the Media Sessions API for previous and next track commands. This is feature is available on Chrome OS, macOS, and Windows, with Linux support coming later.

On Android, Chrome 73 introduces a new download manager and downloading experience. When saving an image or any other file, a snackbar that features an animating loading indicator slides up from the bottom of the screen. Previously, there was only a toast message for initial confirmation, with the snack bar appearing once complete.

Meanwhile, the Downloads page features full-width images with rounded corners. This reverse-chronological feed can be filtered by Video, Images, and Other at the top of the screen. Pressing a chip will refine what appears below.

The Omnibar in version 73 also features a quick shortcut to share the current URL, with a “pen” icon allowing users to edit the link before entering. 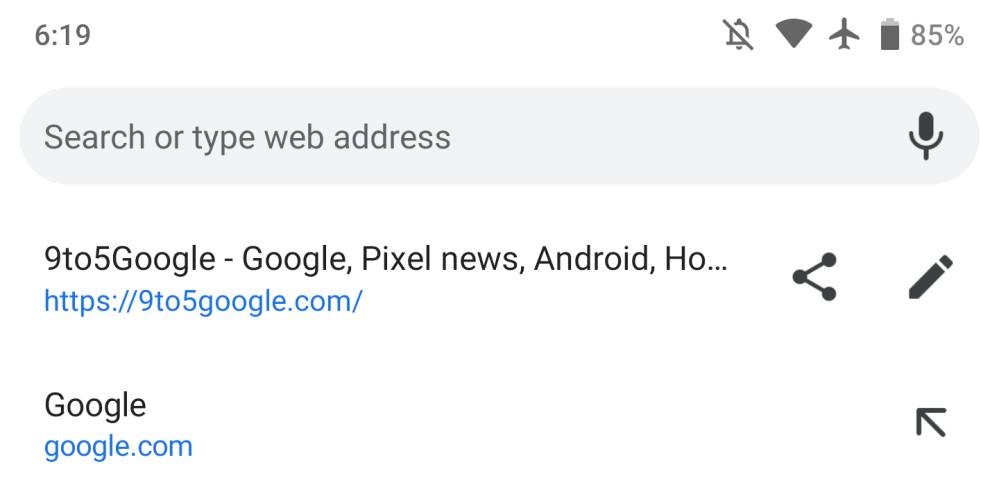