For a few months now, we’ve known that Google is bringing “Tab Groups” to Chrome, both on Desktop and Android. We’ve already seen how these tab groups will change our browsing on Android, but desktop has remained somewhat elusive. We now have our first real look at tab groups in Chrome OS and Chrome for desktop, thanks to a Googler’s screenshot.

On Android, we saw that tab groups made browsing much more organized, allowing us to divide our Chrome tabs into tasks or categories, then only view the small set of tabs we need at any given moment. This new view also offers quick access to switching between the tabs in your current group. This is, of course, nothing new to the browser world, as Mozilla Firefox offered this some years ago under the name “Panorama.”

On desktop, things are shaping up to be quite a bit different. While we haven’t yet been able to get hands-on with tab groups on Chrome OS or Chrome for desktop, we now have a clearer picture of what Google intends thanks to a screenshot, spotted first by ZDNet, on the Chromium bug tracker. 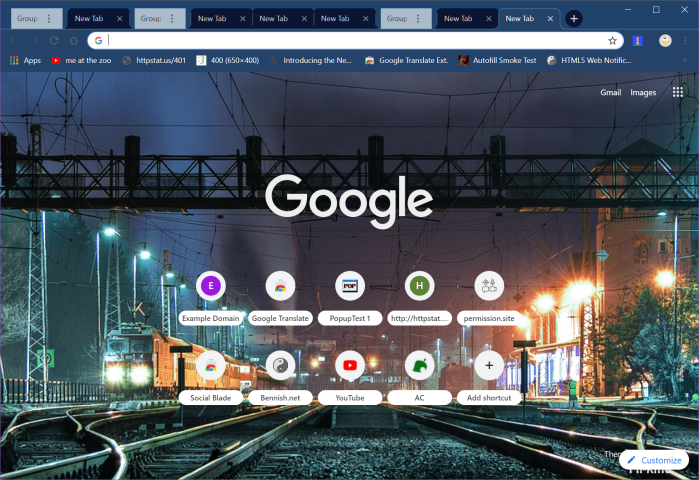 There’s a few things that we can quickly gather from this screenshot. The first is that this will not work like Firefox’s Panorama or the tab groups on Android, as multiple groups will be visible in the tab bar.

The second is that each group will have what Google developers are currently calling a “header,” seen in the screenshot as the lighter-shaded tabs labeled “Group.” Each of these headers clearly has a context menu button (sometimes called a “kebab menu”), though what options this menu will have remains unclear.

These two facts combined don’t quite make sense yet, as it seems like this design for tab groups will only further clutter the tab bar, not organize it. My current suspicion is that these group headers will be able to “collapse” to hide their tabs, though no code currently points to that.

A small portion of the tab groups functionality is already live in Chrome Canary and Dev, under chrome://flags#tab-groups, but currently does little more than add the ability to add a tab to a group, from the right-click menu. The grouping is not currently visible like it is in the screenshot above.

So, what do you think? Do tab groups look useful, or like just another way to clutter up our already crowded tab bars? Let us know in the comments.