Review: Diesel On Full Guard 2.5 brings out the snarky side of Wear OS 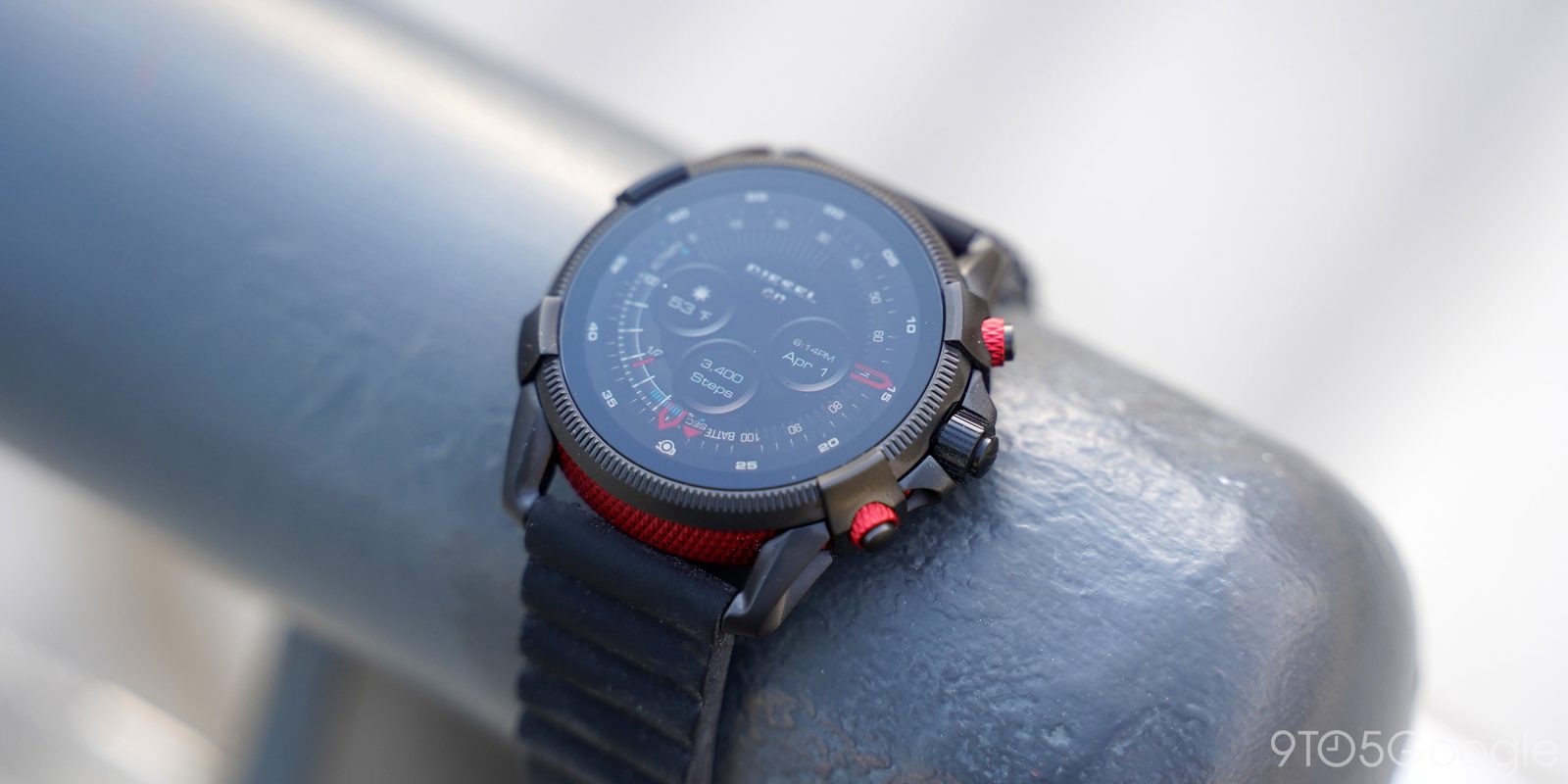 The one strength Google’s Wear OS has over its competition is choice. You can find just about any hardware you want from the Wear OS ecosystem, and the Diesel On Full Guard 2.5 is a great example of that. Here’s why.

An industrial design that doesn’t apologize

The strength of the Diesel On Full Guard 2.5 is, without a doubt, its design. Coming from a fashion brand known for outspoken designs, this watch is big and bulky and doesn’t apologize for its size. The 47mm case is bigger than most other smartwatches out today, but at 13mm thick it’s also not totally unwieldy.

It’s an industrial look with lots of machined details. Personally, I love it, but it’s really not going to be for everyone. This is a watch for traditional watch fans, not those who want a computer on their wrist.

I’ve also got to say, the choices Diesel has made when it comes to color are just top notch. I simply adore the black and red model with the accent color bleeding through from the sides to the buttons. That same design is also available in blue and black variants as well. 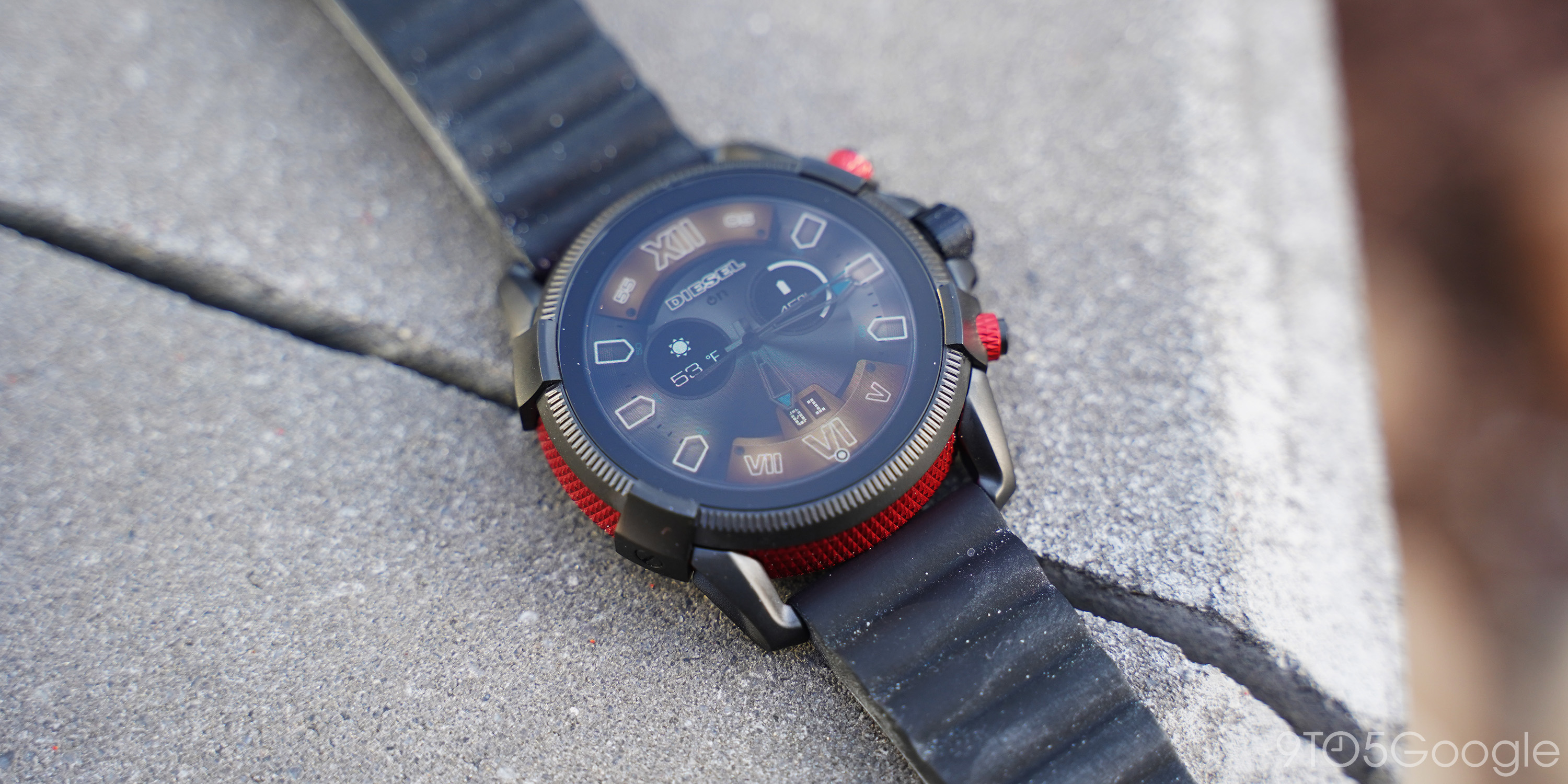 There are three buttons along the right side of the Diesel On Full Guard 2.5. The center button is the normal multi-purpose app drawer and back button, and it also rotates for easier navigation. The top and bottom buttons default to Diesel’s watchface effects and Google Fit respectively. All three buttons have a fairly tactile feel to them.

As for the display, there’s a 1.39-inch OLED panel. It’s sharp and bright just like most Fossil Group watches, and touch response is as good as you’d expect. There’s also NFC under the hood for Google Pay.

Silicone bands have strengths and weaknesses

This black/red variant of the Diesel On Full Guard 2.5 ships with a 22mm silicone band. It’s much thicker than most silicone bands, but it’s very comfortable and suits the watch’s design well.

My complaint about this band, though, is that it picks up dust incredibly quickly, and it’s not easy to get off. I’m not sure what about this band makes it pick up dust so much easier than others, but it’s pretty annoying. The watch packs 5ATM water and dust resistance, though, so taking a second to wash it off shouldn’t be a problem. 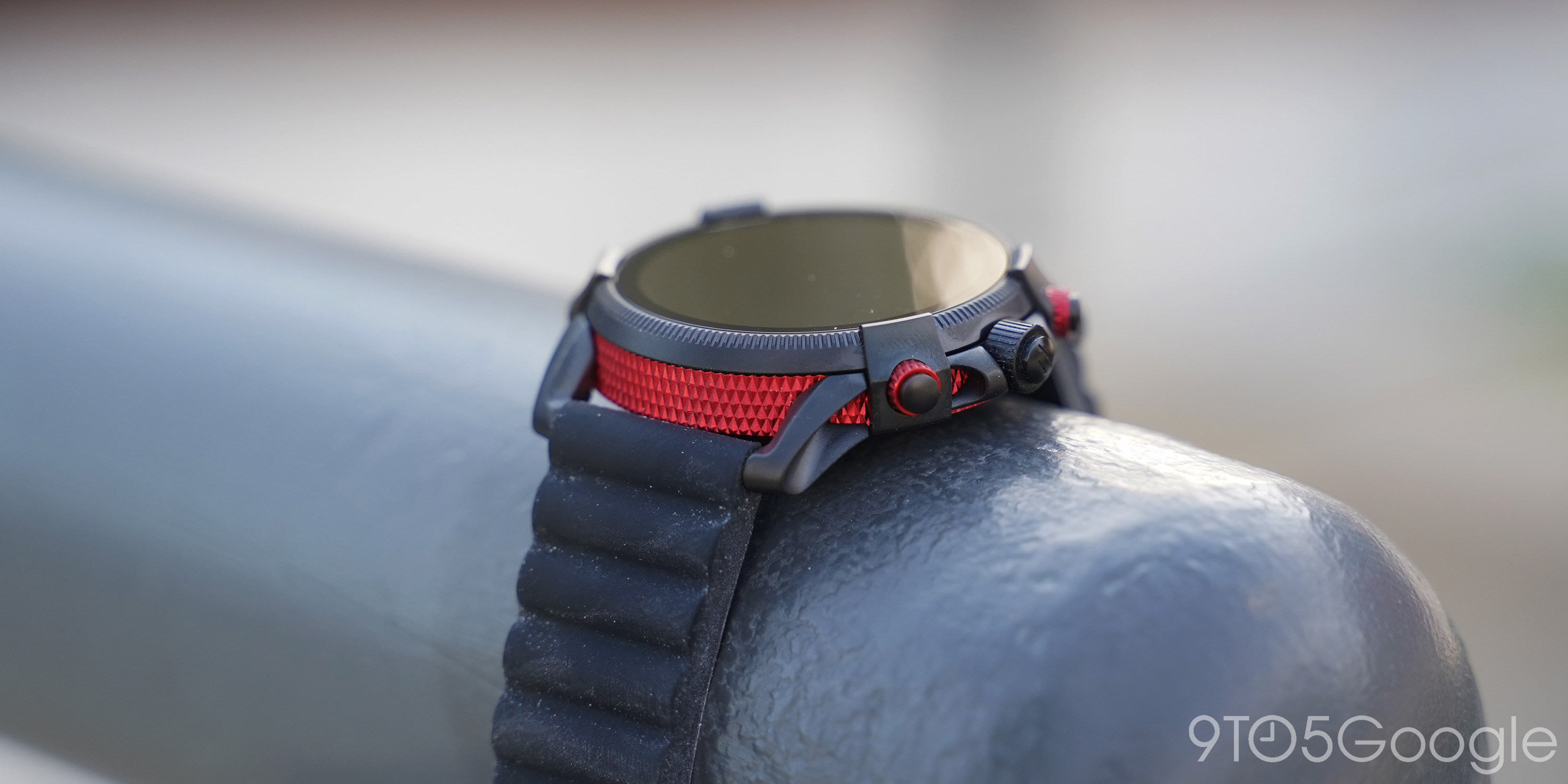 Fitness tracking for the casual user, not the junkie

Let’s be honest, when it comes to fitness tracking, most people just want a general idea of their steps and heart rate. For that purpose, the Diesel On Full Guard 2.5 will suit your needs. There’s a heart rate sensor around back that works just fine, and the assorted sensors inside track your steps and workouts with relative accuracy.

Unless you need crazy accuracy, this watch will handle your fitness needs well, and Google Fit is also more than up to the task there. If you want a proper fitness tracker, maybe don’t look into fashion watches, though.

As far as specs go, the Diesel On Full Guard 2.5 is pretty much the same as any other current Wear OS watch. There’s a Snapdragon Wear 2100 chipset and 512mb of RAM, and that’s still a package that struggles to keep up.

For notifications and watchfaces, this package is fine, and that’s sort of the point of Wear OS nowadays. Wear OS in its current is better suited to adding smart features to a fashionable watch, not so much a computer mounted to your wrist. That’ll remain the case until Google finally makes a push to include a chipset that isn’t 4 years old on this platform.

Outside of the usual though, Diesel’s watch seems to suffer just a bit extra in one particular case. When waking up from sleep mode, this watch takes several seconds at times to fully load up. Presumably, this is due to some of the company’s own additions. 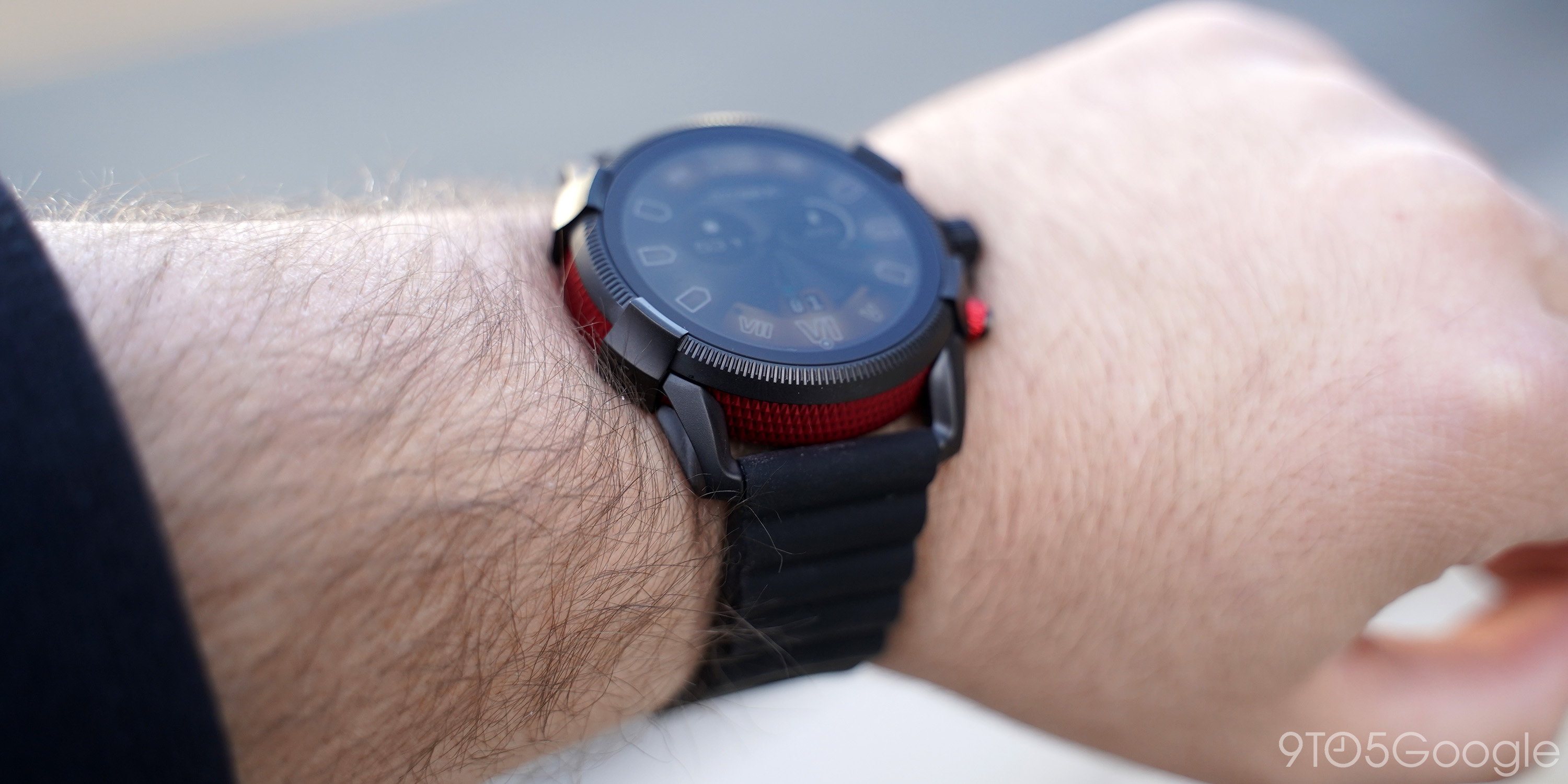 On top of Wear OS, Diesel has included its own watchfaces. There are several different options, some of which interact to your touch. They all look distinctly Diesel, and I very much enjoyed them.

Using a second app, Diesel also applies some special effects to its watchfaces. There are Weather, Activity and Do Not Disturb modes. The effects are most obvious with the Weather Mode, which puts different animations over the watchface depending on the weather in your area. I did notice that when this was turned on, it caused the watchface to load up quite a bit quicker.

My favorite addition, however, is the Diesel T-ON-I app. The notification app that give you notifications “the Diesel way” has a unique UI and some fun additions throughout. It pulls in your weather, agenda, and activity data to send snarky messages throughout the day.

Often, these relate to the weather, but sometimes you’ll get a message shaming you for a lack of activity or just the watch makes jokes, usually at your expense. Personally, I find it absolutely hysterical and love seeing them pop up a few times each day. A few messages it has sent me are listed below.

Rain. Or as I like to see it, showering made easy.

Get yourself someone who looks at you the way your mate looks at me. #RelationshipGoals

When life gives you lemons, just dip them into vodka.

Some friendships are timeless. Trust me, I’m also a watch

I’ve got to give Diesel credit where it’s due. The T-ON-I app made using this watch a pleasure, and it makes me smile often enough to where I’ll keep using this watch well after this review goes up. 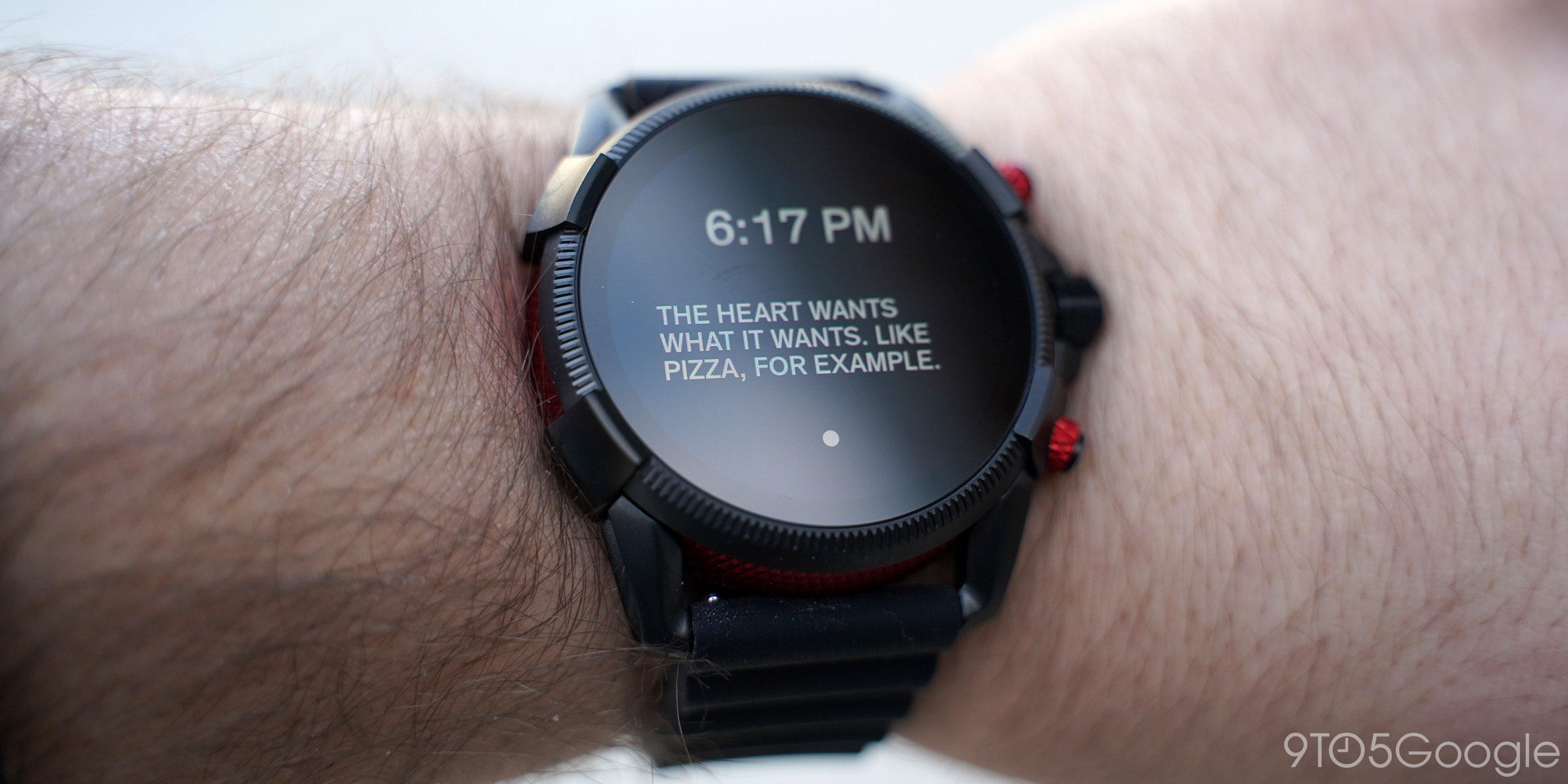 This is Wear OS, so mediocre battery life really shouldn’t come as a shock. More or less, the Diesel On Full Guard 2.5 lasts about a day, but since there’s so much room here, there’s a hefty battery too. The 370mAh battery inside typically lasts me through a day comfortably, and it’ll survive into the next morning if you forget to charge it. Two days is unlikely, though.

Only a matter of finding the right customer

It’s hard to recommend a Wear OS watch when you’re talking about a proper smartwatch. Sure, it delivers notifications and basic fitness tracking fairly well, but beyond that, you’ll want to use a Galaxy Watch or Apple Watch.

The Diesel On Full Guard 2.5 is a watch you should buy for its looks. You won’t find this on any other smartwatch on the market, and as someone who used to wear designs like this all the time, it’s something I’ve appreciated having on my wrist. At a starting price of $325, I think Diesel is asking a reasonable price to the right customer.