Last week, the Android TV community was up in flames over the revelation that ads had suddenly started appearing on homescreens. Users are outraged at the situation, but it might not be quite as bad as some have made it out.

After speaking directly to Google on the situation, here’s everything we know about ads on Android TV.

This whole debacle started with a Reddit thread that showed a new Sponsored row on the Android TV homescreen. This was added in the most recent update to the Android TV launcher and quietly activated for some users as part of a “pilot program.” After speaking more with Google on the situation, we’ve been able to get a better understanding of what’s been going on and, hopefully, answer a few burning questions for the community.

What hardware is getting these ads?

The most important thing to note in all of this is that, no, not all Android TV users are seeing this Sponsored row. When this story first hit the news cycle, user outrage quickly misinformed many that this new Sponsored row was showing up on Android TV devices from Sony, Nvidia, and Xiaomi.

Google has confirmed to us that select Sony TVs are the only models part of the pilot program.

For the time being at least, the vast majority of Android TV users won’t see the Sponsored row, and that includes the Nvidia Shield and Xiaomi Mi Box. Google says that hardware OEMs need to opt-in to this program, and during the pilot, not all partners were even offered the option.

What’s the difference between ‘Sponsored’ and ‘Promotional?’

A big part of this confusion came from the fact that there are two very similar features of Android TV at play here. Google is testing the Sponsored row as part of a pilot program, but the platform has had a Promotional row for years now.

The Sponsored row is something totally new that is in testing from Google. It serves up content from providers (see below). Essentially, it’s an ad or “content promotion” block as Google prefers to call it. On the other hand, there’s a Promotional row. This has been baked into Android TV basically since it first debuted, but it’s always been easy to disable. The “Google Play Apps Spotlight” features new or interesting content from the Play Store, but it’s not a direct advertisement.

At the same time as the Sponsored row first started appearing on Android TV devices, a bug for the launcher caused the Google Play Apps Spotlight row to constantly reappear. This affects most Android TV hardware on Oreo and above, but as Nvidia confirmed to us and Google reiterated, it’s just a bug on Google’s end which is unrelated to the Sponsored row. The company is actively trying to fix this problem.

Unlike Promotional channels, the Sponsored row can’t be turned off – Image: Zatz Not Funny

Why is Google serving these ads on Android TV?

The big question is why these ads are showing up on Android TV in the first place. Unlike Roku or Amazon’s Fire TV platforms, Google has kept Android TV largely free of advertisements since its launch. That’s been a big selling point for devices like the Shield, as well as Sony’s expensive TVs that run on the platform, at least for some users

Understandably, those users are not happy that Google is even testing a Sponsored row. To that end, the company has given an explanation for why it’s running this pilot program in the first place.

Google explains to us that the goal of the Sponsored row on Android TV isn’t to grab a quick buck, but to promote content to the user. The company says that content discovery has been a major pain point for Smart TV customers, and it hopes to use this Sponsored row as a central location for providers to promote their new content in one place on a user’s TV.

As an example, content such as a hit TV show from a streaming service you don’t subscribe to might appear in this row, or a movie or TV show that’s just debuting.

Since this is a pilot program, Google wasn’t able to share many details on how this content would be served or if the end user would have any control over it. They do explain, however, that only content from services with apps already on Android TV, but that you might not have installed, will be shown here. The current pilot program is only working with a few direct advertising partners, though.

Some examples that have hit the web show promotions for PlayStation Vue with March Madness streaming, TV shows from FOX, and even Google’s own YouTube TV. 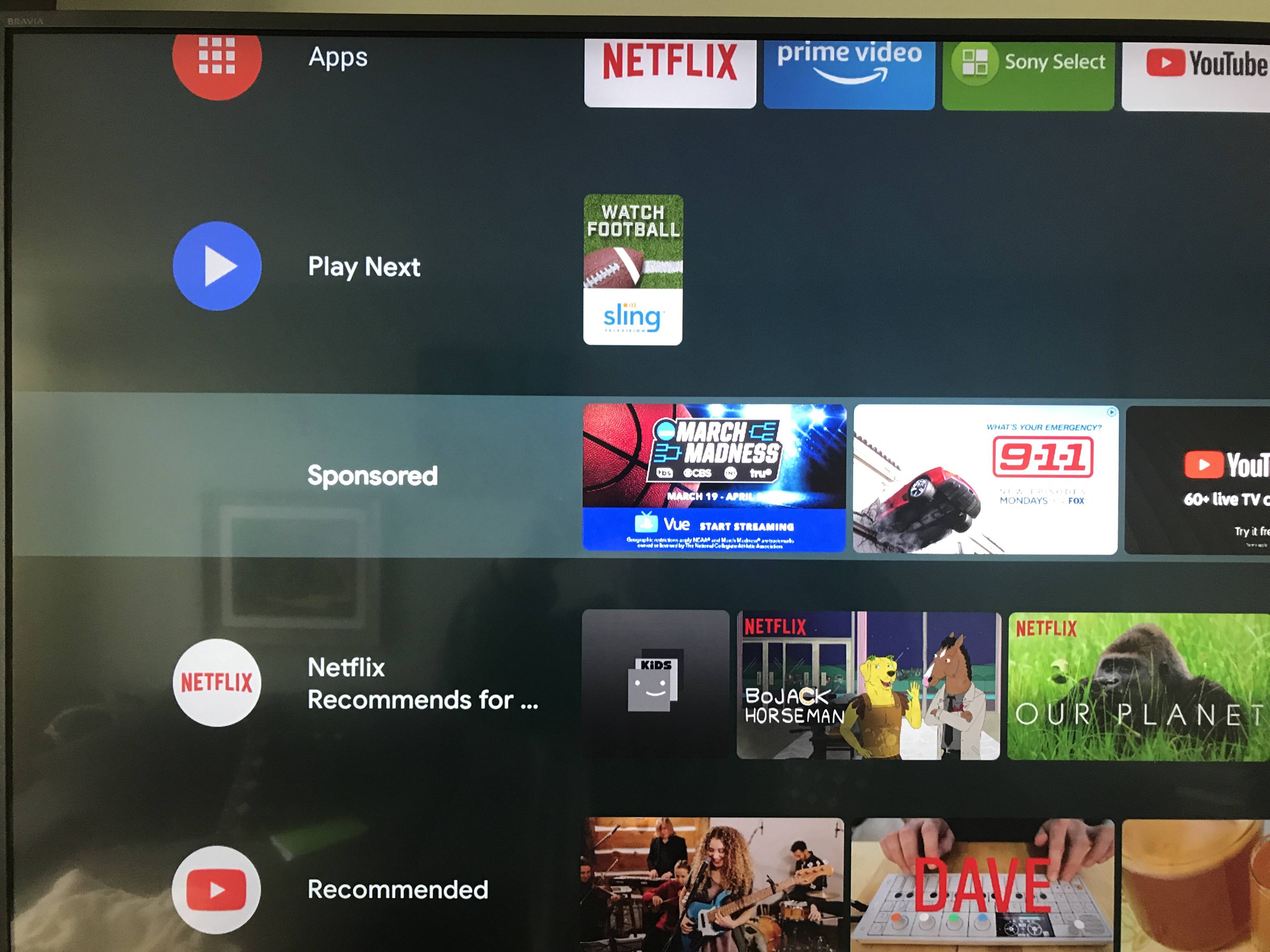 Some of the Sponsored row ads so far – Image: u/Petong

Google says it is already seeing “active engagement” from users who are part of the pilot program, and that it is looking for feedback from users via the “Send Feedback” voice command on Android TV.

Android TV has been my favorite platform for TV since it launched. The clean UI has only gotten better over time and I thoroughly enjoy the tight Google integration. To me, ads were inevitable, but I can certainly understand the frustration so many users have been expressing, especially given how Google implemented the Sponsored row. Having a row which can’t even be moved to a less obtrusive location looks like it could be a major pain in the butt.

However, I still don’t agree that this is as big of a deal as many users are making it out to be. Google is far from the first to try something like this, and clearly, people don’t care all that much on other platforms. Roku’s ads are far more obnoxious in my opinion, as are the ones on Amazon’s Fire TV devices. I bet Apple will do something similar to promote its own service too.

The one valid complaint I’ve seen from users is that Google is pushing these ads on TVs that never had them before. Android TV never had a Sponsored row quite like this before, and by forcing one on users, the company is really pulling the rug out from under them. At the very least, this needs to be something that can be disabled or moved. If Google really sees it as content promotion and not straight advertising to make a few extra bucks, it should be enabled by default but able to be turned off or at least moved by the end user.