Google I/O 2019 has delivered a ton of new Android developments, but in one of its sessions, Google confirmed an interesting detail about navigation. Going forward, Google will only support two versions of navigation – Android Q’s new Fully Gestural Navigation, and the classic three-button setup.

Taking a quick step back, Android Q’s take on navigation right now is a bit of a mess. There’s the “pill” gesture navigation system from Android Pie which is largely hated, the new Fully Gestural Navigation which is a lot like what’s on the iPhone X, and the classic 3-button option which has been around for ages and is now on the Pixel 3 too.

In a talk today regarding mobile usability, Google went over a bunch of details regarding the new dark theme and gesture navigation in Android Q. Quickly into the presentation, the talk confirmed a crucial detail about navigation, and specifically how it’s simplifying matters.

Android Q will support two navigation modes – Gestures and Buttons. The new Fully Gestural Navigation (which I have a hunch will be renamed) is going to be the only way to use gestures on Android, unless your OEM adds its own version. To satisfy long-time users and also help with accessibility, Google will also continue to support the classic 3-button navigation bar that’s been in Android for the better part of the decade.

Google is also requiring that OEMs ship their phones with both of these options. The company says that it wants to unify the ecosystem and make things easier on developers.

Update: Android Authority confirmed that OEMs can continue implementing their own system. , but at the very least, they’ll have to include Google’s version and it’s definitely being discouraged. Google has not explicitly said that it will stop OEMs from including their own gesture solutions. The folks over at XDA transcribed the relevant portion of the talk.

…one thing that device makers have done is try to approach this from a software side. And what they’ve done is built their own gesture nav. And every device maker has a different impression of how gesture nav should work. What we recognize on a platform side is that kind of gets insane for a developer. Thinking about N different gesture navs when you’re trying to develop, design for, test for, your app, it just kind of gets insane. So with that in mind, we introduced this gesture nav in Q and we’re going to be standardizing the ecosystem as of Q on 3 buttons and our model moving forward.

During this same session, Google further explained what developers can do to override system gestures if it conflicts with their app. The home swipe gesture is “protected” and can’t be disabled by developers. Google will let developers disable portions of the back gesture when needed, but warns them to be careful with it. They also want developers to build their apps to draw behind the navigation bar, “strongly recommending” the change, saying the same for the status bar. 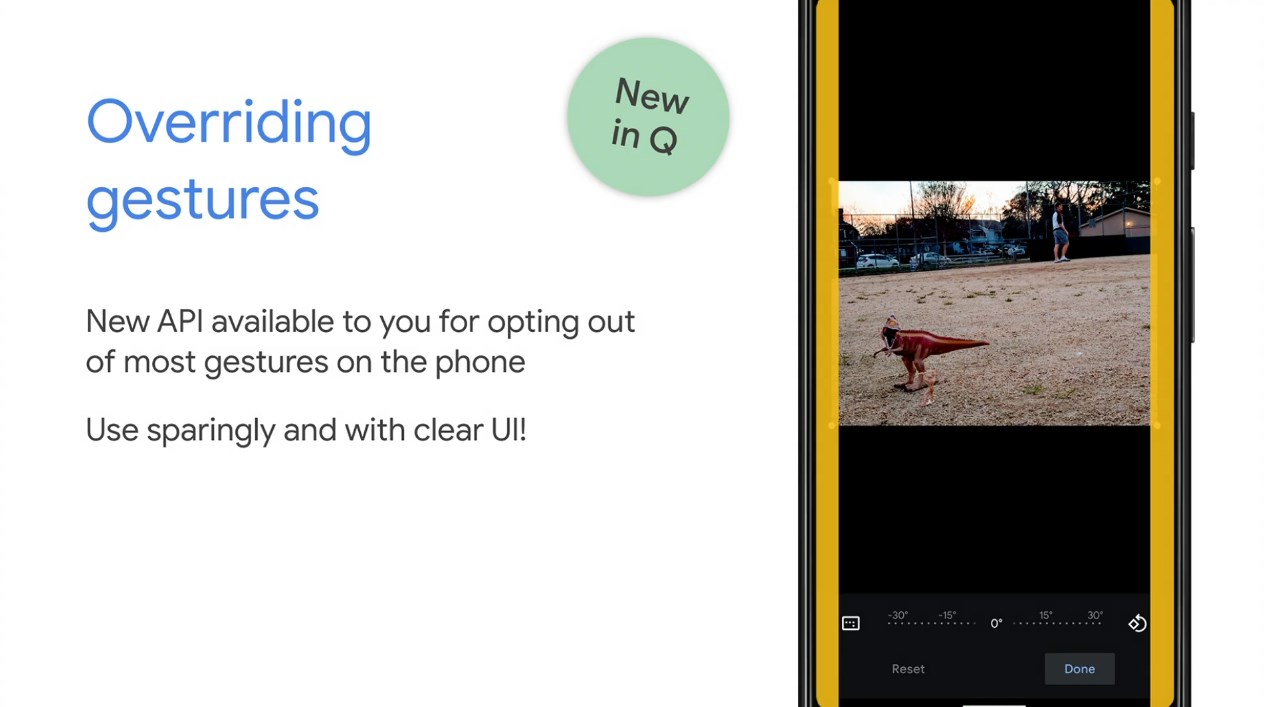