OnePlus 7T review: An unbeatable package for under $600 [Video] 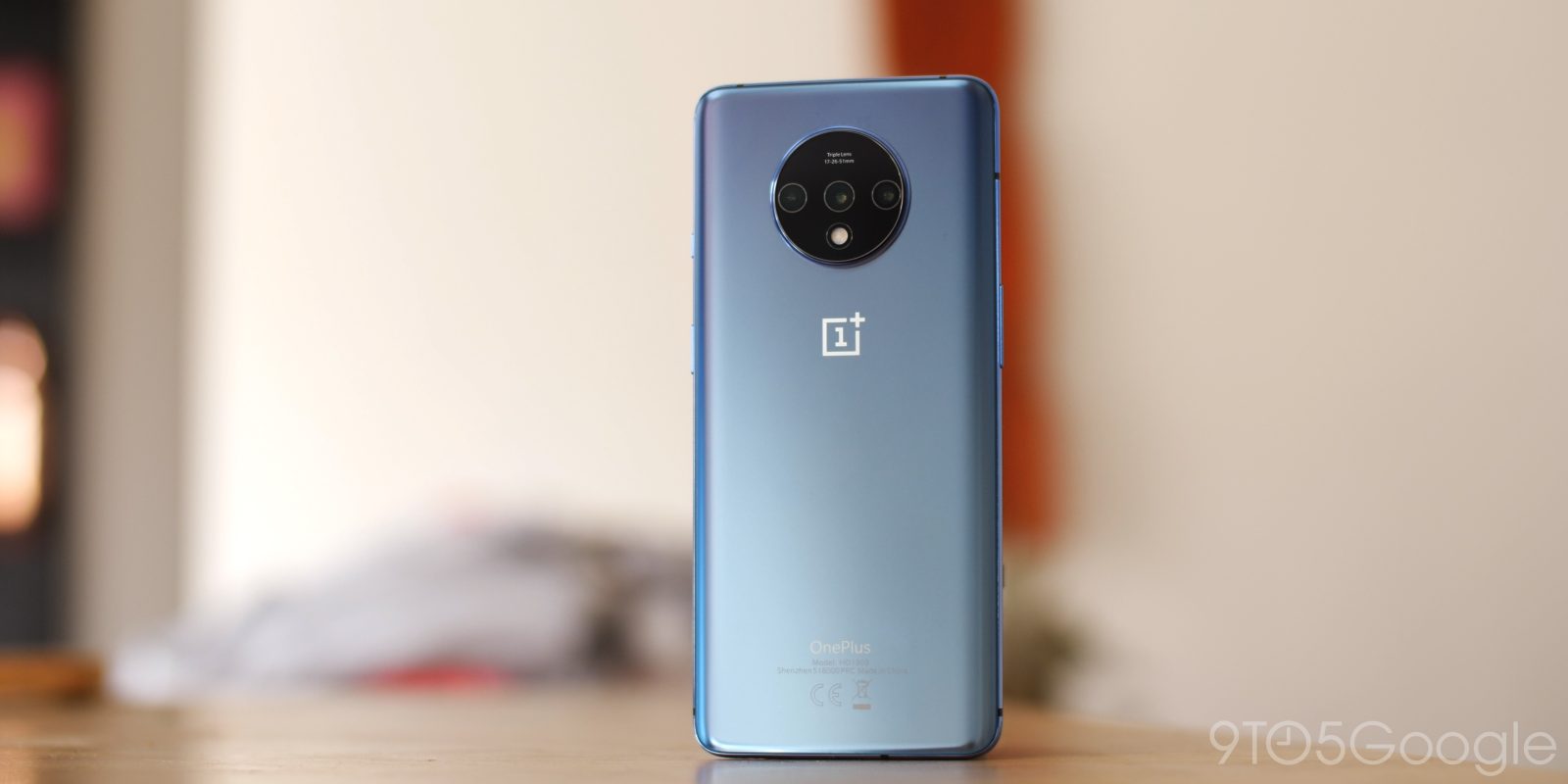 The OnePlus 7T is the finest ‘non-Pro’ OnePlus phone to date and having spent some serious hands-on time reviewing the device, there is no doubt in my mind that at $599 it will arguably be the affordable flagship to beat in 2019.

From the outset, the OnePlus 7T does feel unlike many of the other ‘T’ models released by the Chinese firm in recent years. OnePlus has clearly learned a thing or two since dropping the first in the more premium and higher-priced ‘Pro’ line earlier this year.

The 7T takes much of what made the 5T through to the 6T so popular and then adds some of the ‘flair’ features of the 7 Pro — which results in a new-but-familiar experience.

US fans may have been left feeling betrayed when the OnePlus 7 was unceremoniously absent from stores and carriers back in May. While you were left with the still-impressive OnePlus 6T, I assure you that this update is more than worth the wait. 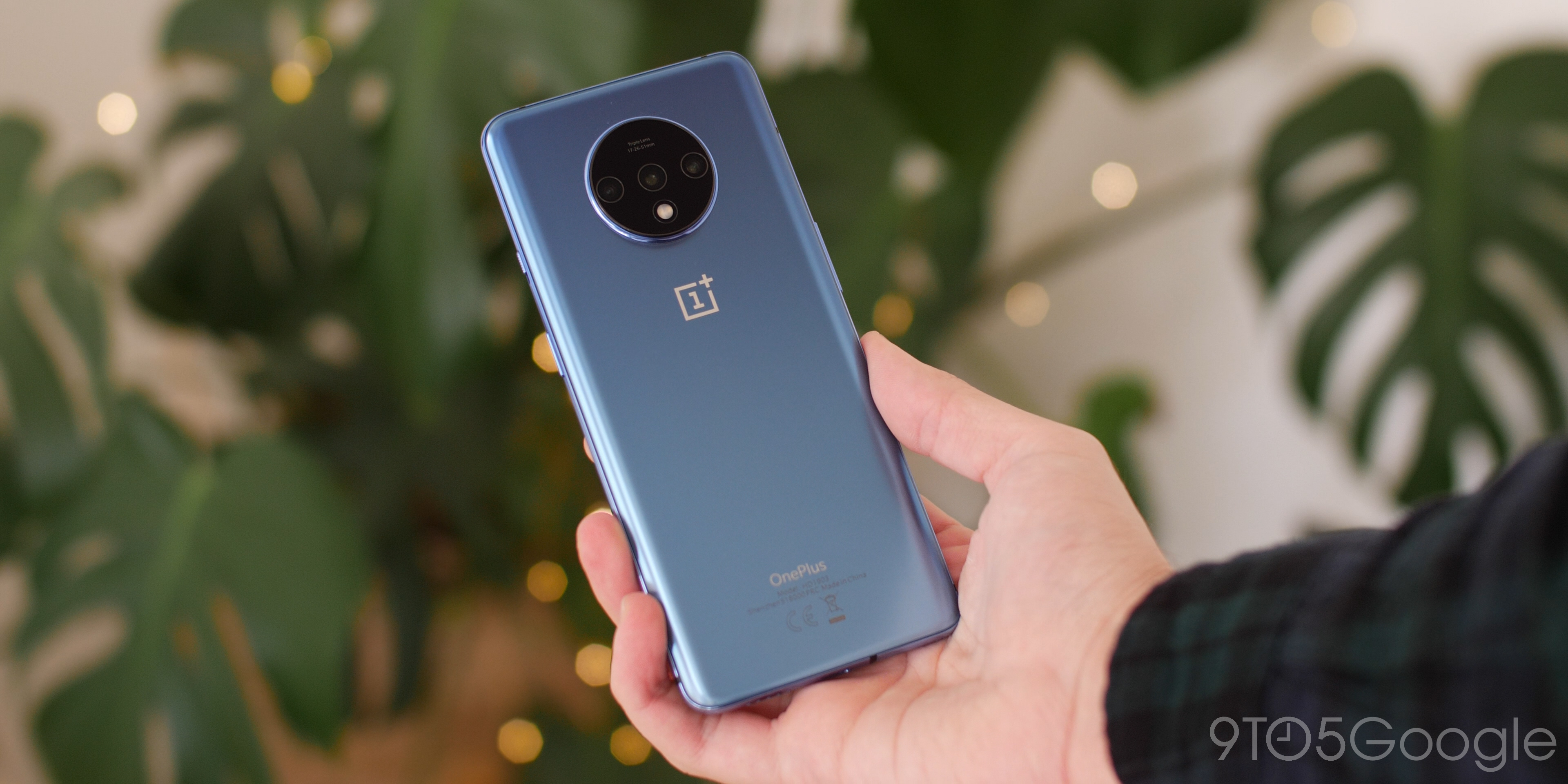 I said at the top that the OnePlus 7T feels unlike other ‘T’ models, and the design nuances are core to that. The move from 18:9 to a 20:9 aspect ratio means that the 7T is slightly taller and boxier than the OnePlus 6T and 7 while managing to reduce the side bezels, forehead, and chin.

I applaud the flat 6.55-inch AMOLED display, especially as more and more brands insist on curved displays. This feels almost refreshing and way more comfortable to use every day. Once you try the 90Hz display it’s easy to fall in love. The super-high refresh rate isn’t consistent across every app but when it’s at full speed I do find switching back to a 60Hz display quite jarring initially — adding it to the 7T was a superb move.

I must admit that at first, the 20:9 aspect ratio seems odd but you soon get used to it. Videos crop in a tad more than it would on an 18:9 aspect ratio display, and the 2400 x 1080 pixel resolution is pretty odd but overall it’s a superb FHD+ screen. Being HDR10+ certified also means movies and TV shows look fantastic from all angles.

The back glass has slightly more acute curves, which makes the entire device feel ever-so-slightly more comfortable in the hand. Having a frosted glass back also means despite being solid, it has a softness that just begs to be held. Obviously, the camera module does have quite an effect on the overall balance of the phone too, making it a little top-heavy even in the palm.

The sizeable new circular camera notch at the back shows you that OnePlus means business with this phone. While the 6T and 7 had solid if unspectacular camera hardware, the OnePlus 7T is a second step into high-end camera hardware for the firm — but more on this later.

A big improvement on the 7T is undoubtedly the haptics, as the device has a brand new haptic motor for even more satisfying buzzes and vibrations. It doesn’t quite reach the quality offered by the OnePlus 7 Pro but it is a major step up over the buzzy, hollow-feeling OnePlus 6T.

Available in two distinct colors, my OnePlus 7T review unit looks gorgeous in the signature Glacier Blue finish. Like the Nebula Blue OnePlus 7 Pro before it, the blue deepens and alters depending on how you hold and look at the phone. There is no doubt that the hardware and design of the OnePlus 7T are genuinely top-tier. 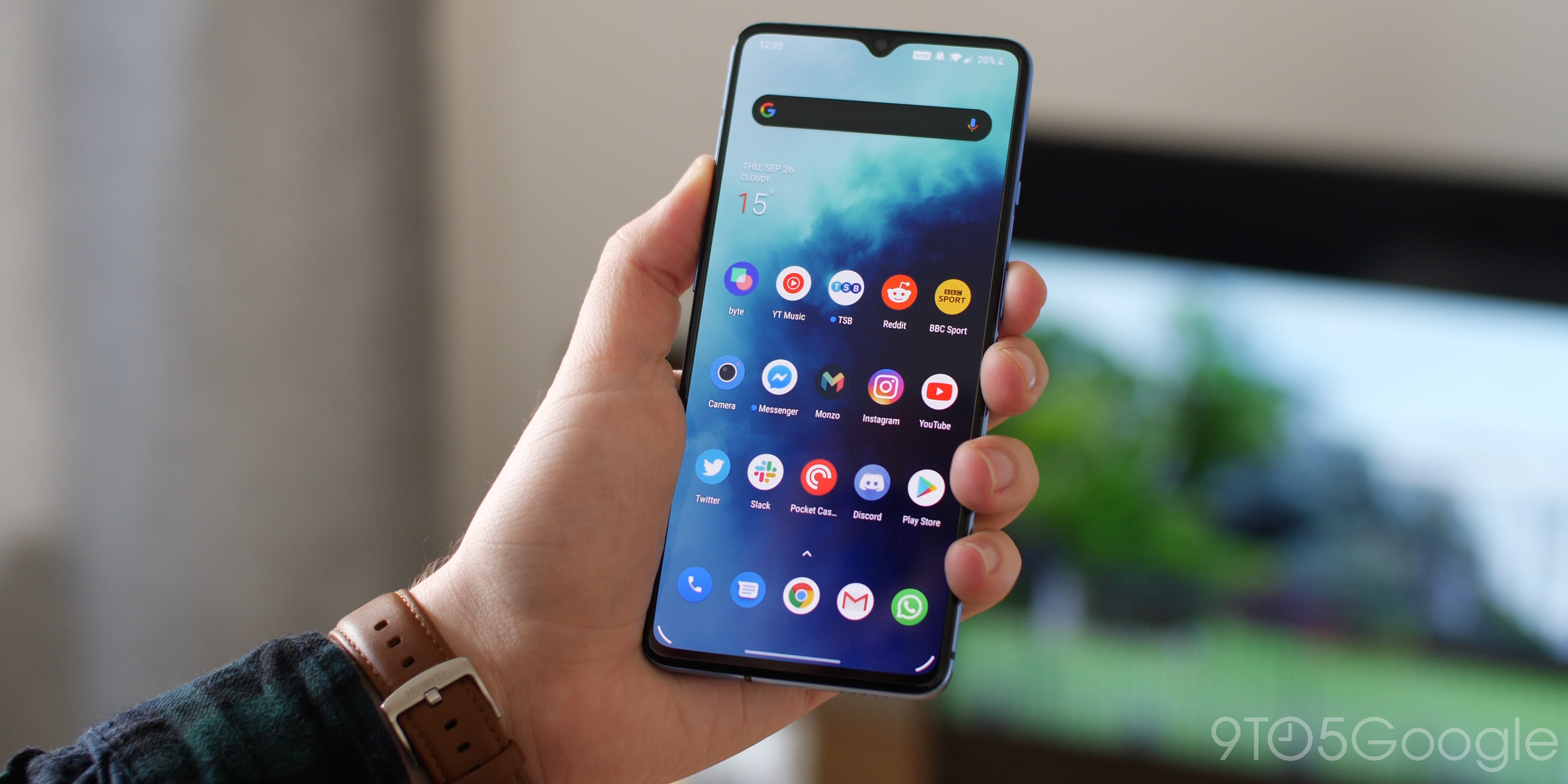 Oxygen OS 10.0 atop Android 10 just blazes thanks to the combination of the internals, the 90Hz display, ultra-fast UFS 3.0 storage and the lightweight skin itself. There has been no point where I have been left wanting. I must admit the display enhances that so-called “fast and smooth” performance. Everything feels exceptionally responsive and cohesive as a result.

I can’t say definitively within this review what difference the Snapdragon 855+ chipset makes to the OnePlus 7T. It does go without saying that it is always nice to have the very latest chipset in your smartphone though. The overclocked CPU is said to help improve gaming performance — something that I must admit no OnePlus phone I have used has really struggled with previously.

I’m already a big fan of Oxygen OS, so the new additions like Google Lens integration within the OnePlus camera app are just icing on top of an already appetizing cake. The new theming options give you a ton of control over just how the Oxygen launcher looks and relegates Nova Launcher to just an unused app drawer icon.

One big improvement made in Oxygen OS 10.0 over the Pixel’s version of Android 10 is actually the gestures. They feel a little more thought through on the 7T, with visual upgrades of the gesture bar being a prime example of the enhancements. Other nice little tweaks are things like the animation when you delete apps from your home screen — it’s this attention to detail that really endears me to the third-party skin.

It’s also worth noting that at this point in time nobody who buys a OnePlus phone is worried about software performance. You can throw just about anything at it without hiccup or issue. 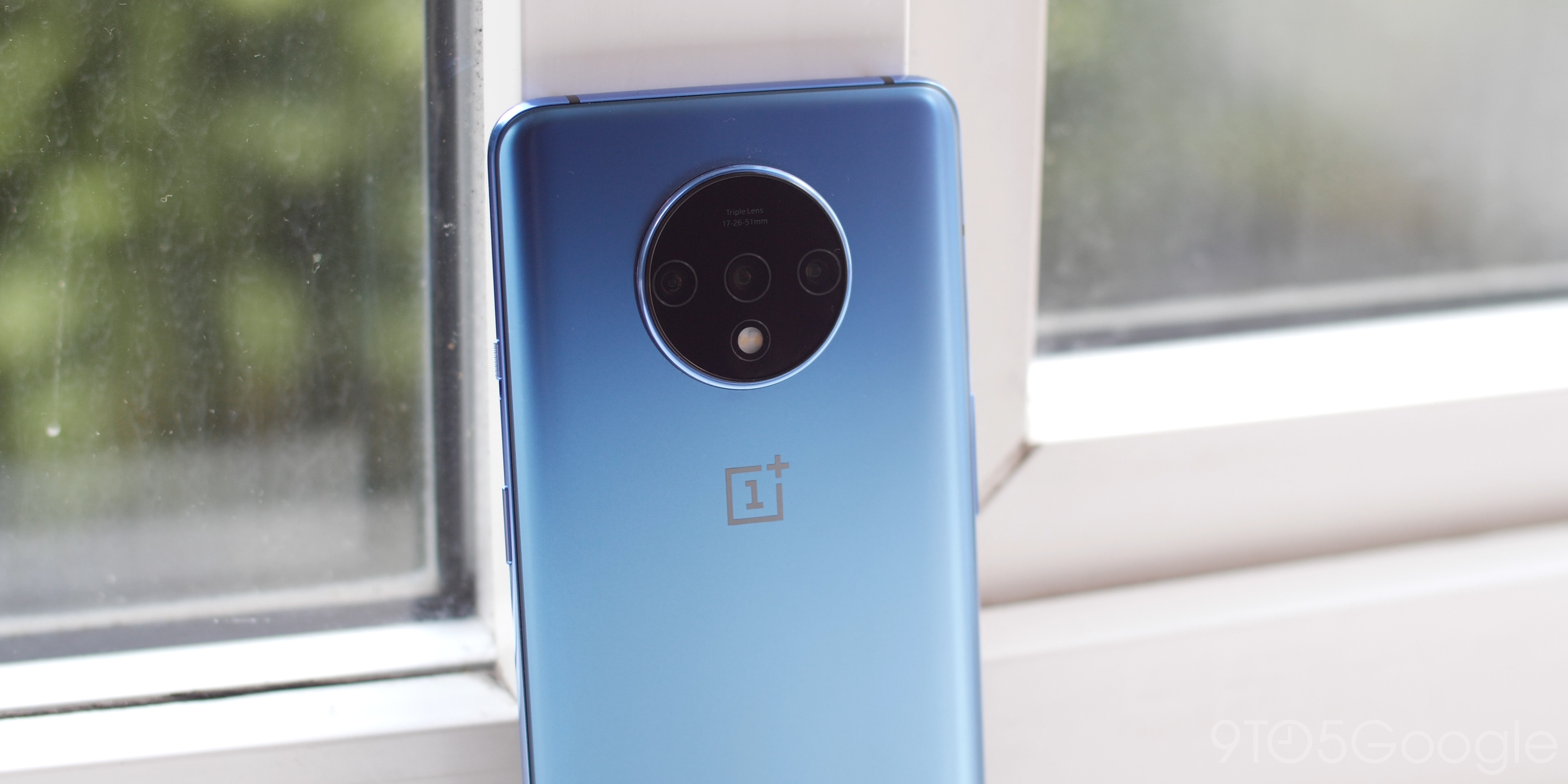 Having a triple rear camera setup on a mainline OnePlus phone for the first time is a massive deal. For years the camera has been one area that the OnePlus line has seemingly struggled with and would often get criticized. Although the 7T isn’t perfect, it definitely provides the biggest step up we’ve seen in some time.

Colors and dynamic range are fantastic. The 48-megapixel main sensor — when in the pixel binning 12-megapixel auto mode — produces crisp, clear and pleasing stills. Enter ‘Pro mode’ and you can unlock the full power of the 48-megapixel Sony IMX586 sensor. My advice would be to steer clear of this though, as you add in grain and the potential for poorer snaps.

The new macro mode is great for grabbing up-close snaps at as close as 2.5cm. It’s not something I tend to do often but it opens up opportunities for more photos and that is something I wholeheartedly support. Unlike the OnePlus 7 Pro, the 7T only has a 2x telephoto zoom lens. That isn’t too much of an issue but it doesn’t include OIS, which can result in some blurry images if you don’t have a steady hand.

Having an ultra-wide-angle lens is the most attractive new lens. This gives you that extra flexibility that other smartphones have been adding more often year-on-year. It stacks up well against the competition and opens up opportunities for landscape and architectural photography that you simply don’t get with a telephoto zoom lens alone.

In low-light, the new Nightscape 2.0 mode is lightyears ahead of the previous iterations. I’m not sure if it’s the combination of the new sensors or simply better software optimization but the end result is excellent. I can’t say that it tackles the P30 Pro or Night Sight fully but the results are often a little bit more natural and it makes a huge difference for my confidence in the camera.

I have to applaud the video modes yet again on the OnePlus 7T. The phase-detect autofocus is simply superb and really makes using the video modes just that bit nicer. Being able to snap on to a subject in lightning speed feels great when, like me, you are used to manually focusing everything with a dedicated video camera.

There is a new video mode that uses what OnePlus calls hybrid image stabilization. In simple terms, it works similarly to what you see on newer GoPro cameras. It lowers the video resolution down to 1080p at 60fps but I must admit that it some weird traits — including a sort of distortion effect. I’m not sure if that is a quirk of the pre-release OnePlus 7T review unit I have or simply something that can be fixed with a software update.

Everywhere else the video capabilities are right up there with the best in the industry. I would like to have seen some more slo-mo modes but I am still disappointed that there appears to be no option to record in standard modes using the ultra-wide camera. Hopefully, an update comes soon to fix this oversight — although it may not be available right out of the box to appease some fans angry it still hasn’t come to the 7 Pro.

This is one area I have seen some mixed performance, or I felt I have during my OnePlus 7T review period. The bump from a 3,700 to 3,800mAh battery is nice but the larger 90Hz display clearly does mean faster battery drain. You will get a day of solid usage out of the OnePlus 7T and maybe a little headroom to spare on top.

As much as I would have loved to have seen wireless charging finally come to a OnePlus phone, the inclusion of 30W charging in the form of Warp Charge 30T is immense. Being able to get nearly 70 percent battery in just 30 minutes still blows my mind even though there is slightly faster charging tech out there.

Expect to see the screen-on time figure reach at least six hours on the regular without too much of a sweat. Beyond that will definitely depend on just how you use your phone day-to-day.

The OnePlus 7T is a fantastic step forward for the main OnePlus line and as such if you were looking at picking up the 6T prior to its launch, then it is a complete and utter no brainer. I’d even say that some of you out there that don’t care too much for curved displays might consider switching from the OnePlus 7 Pro such is the impression it has left on me.

At $599, it gives you one of the best feelings of flexibility and power in one truly affordable package. I’d argue it is even a better buy than the OnePlus 7 Pro was upon release. The camera updates make a big difference, while the display improvements help enhance the speed that OnePlus phones have always been known for.

Given that we’ll see and subsequently review the OnePlus 7T Pro in just a couple of weeks, I’m not actually sure what the ‘bigger brother’ will manage to offer that the 7T doesn’t — beyond an improved display and a potentially bigger battery. As it stands this might be the best value and most enticing OnePlus phone on the market for the foreseeable future.

Where can I get the OnePlus 7T?

Naturally, you’ll be able to pick up the OnePlus 7T direct from OnePlus once it becomes available later this month starting at $599.