Without a doubt, the best video calling app on Android, and one of the closest competitors to Apple’s FaceTime, is Google Duo. We’ve uncovered evidence that Samsung is working on integrating Google Duo directly into the Samsung Messages app for Galaxy devices.

When using the Google Messages app, the default SMS and RCS app of Pixel and Android One phones, if the person you’re messaging has Google Duo, you’ll have a handy button to jump right into a Duo video call with that person.

This week, The Korea Herald has reported, via Android Authority, that Samsung is in talks with Google and Korean carrier SK Telecom to create a video chat service powered by Google Duo that enhances RCS messaging.

While many of the details are still unclear as to how such an integration would work, we took a closer look at the latest version of the Samsung Messages app for signs of any Google Duo integration. In the strings, we found a direct mention of being able to call someone using either Google Duo or your phone’s default video calling app.

Looking through the Samsung Messages app’s assets, we even find both monochrome and full-color versions of Google Duo’s logo and a similar logo signaling an audio-only Duo call. The different versions may indicate that the Duo logo will appear in different places throughout the app.

One of the icons seems to be placed side-by-side with the call, search, and menu buttons found along the top of the conversation view. Here’s a simple mock-up of how it should look when enabled. 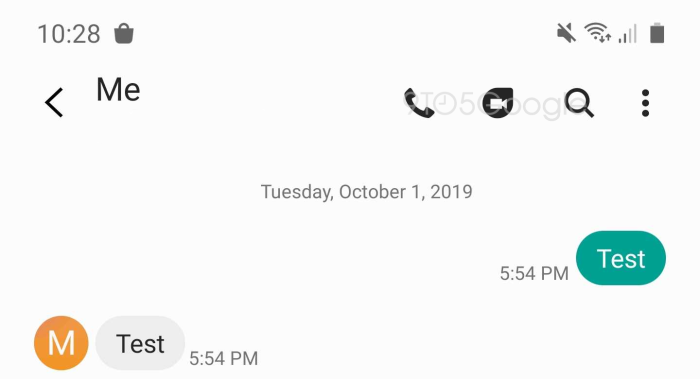 In the app’s code, we’ve found that Samsung Messages is preparing a way to create an Android “Intent” to start a Google Duo video call to a particular phone number. Most likely this is what happens if you tap the upcoming Duo button.