For over a year now, Google has made the Android Open Source Project’s automatic build process public through a continuous integration (CI) dashboard. Today, the company has unveiled the Android Flash Tool as a simple way to try any AOSP build on your Google Pixel phone, right from your browser!

While our first look at the next major version of Android usually comes from an official beta release — typically launched shortly before Google I/O — development on Android continues all year round in the Android Open Source Project. Those with enough experience working with the Android codebase and its tools usually build and flash their own devices with AOSP to keep up with the latest developments and changes.

With the launch of the Android CI, there are far fewer steps involved as developers can now simply download a prebuilt version of the latest AOSP, but they’ll still need to know how to flash it onto their phones. Today, Google is taking the next logical step by launching the Android Flash Tool, a new web app that can install AOSP onto your Pixel phone directly from the browser.

In fact, you don’t even need to have any of the usual developer tools installed on your device like adb. This means you can even use this tool to flash AOSP onto your Pixel from a Chromebook, which is a wild thought. The only real requirements are a Pixel phone (Pixel 2 or newer) or HiKey developer board, a web browser compatible with the WebUSB standard — only Chrome, the new Chromium-based Edge, and Opera for now — a USB cable, and, if you’re on a Windows computer, the Android USB drivers.

Once those requirements are met, you can get started with the Android Flash Tool to install either the newest AOSP build or you can enter the build ID you’d like to use from the Android CI. A few clicks and a download later and your device will be on the newest version of AOSP. 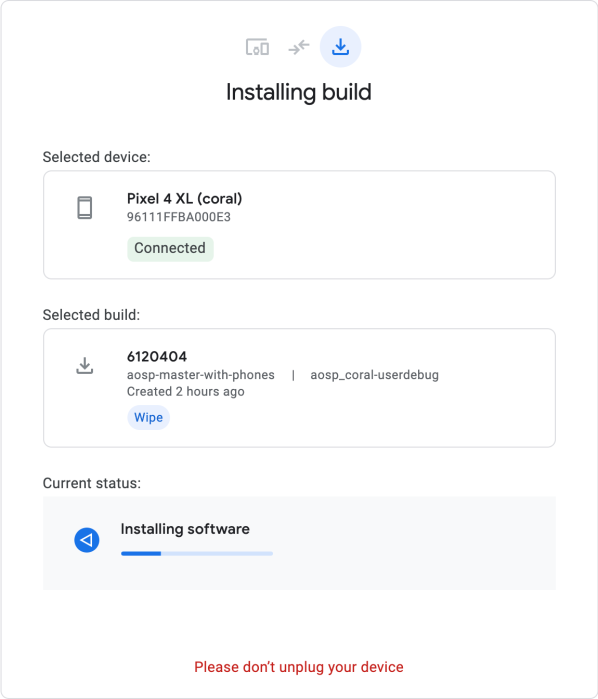 It’s important to note, though, that a vanilla AOSP build is not the refined Android experience you may be expecting. The Android Flash Tool is absolutely not a way to get a sneak peek at what Google has coming up for its Pixel phones, and should only be used by Android developers seeking to ensure their apps will work on the next major Android release.

Importantly, the tool does not offer an easy way to flash your phone back to a normal factory image. Thankfully, this can still be done from your web browser using the Google Pixel Repair tool, but for now this tool is not available in all countries. Be sure you’ve backed up your files and are able to access the repair tool before playing with AOSP’s Android Flash Tool.

Bearing all of that in mind, the Android Flash Tool is available to try now.