Within Alphabet, there are currently three products that directly provide internet service to end-users: Google Fi, Google Fiber, and Loon. According to a new job posting, Google looks to be getting into the business of supporting satellite internet providers.

As a Partner Manager, you will help launch a global satellite based broadband service. You will support satellite broadband service providers, productize the solution and make it available to other satellite broadband ISPs. You’ll manage partners on a day to day basis to make sure that we meet their growth plans in existing markets. You’ll manage the pod and service delivery timeline, work with Google and cross functional teams to handle and process monthly/quarterly PO and Invoices, and ensure continued availability of transit in the existing and new markets.

From this description, Google does not appear to be launching its own satellites, but rather helping an existing partner establish their network. It’s unclear who that partner is, but Google will use what it learns to offer similar services to other companies. 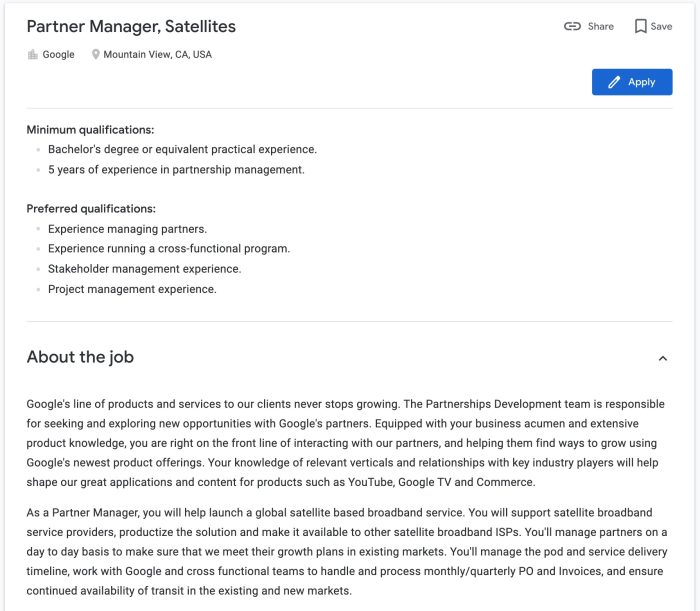 The satellite internet access space is currently dominated by Starlink from SpaceX, which launched 60 satellites yesterday. The goal is to have internet delivered from space rather than through wires in the ground. Coincidentally, Google in 2015 led a $1 billion investment round into the Elon Musk company.

It’s unclear what Google’s service would look like, but Alphabet’s Loon division provides a possible clue. Known for balloons that provide internet service following disasters, the company last year announced that it was adapting its routing technology for low Earth orbit satellites with Telesat. The system helps ensure a connection between the many moving parts of such a network.

That said, this role is based within Google and located in Mountain View. There are no other satellite job listings at the company, and we’ve reached out to Google for more details.