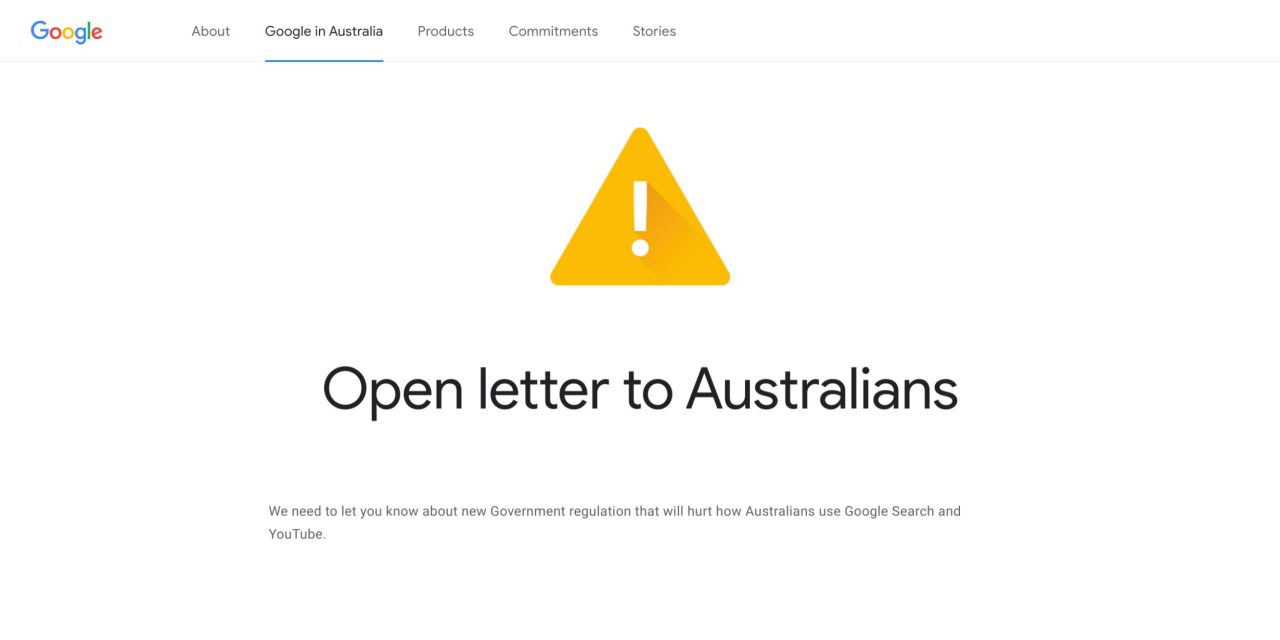 Over the past several months, the Australian government has been preparing legislation to force Google (and Facebook) to pay local publishers for content that appears in Search and News. The tech companies have come out against this proposal, and Google today is directly appealing to its Australian users in an open letter.

At the end of May, Google offered a rebuttal that explains how its business works. Namely, how it does not make money from the Google News app or by surfacing news content in Search. The company instead argues that it provides immense value to publications by linking to articles and providing an international audience, which generates ad clicks.

Google users in Australia today are now seeing the following prompt with a link to an open letter:

The way Aussies use Google is at risk

Your search experience will be hurt by new regulation

There are three main arguments in the open letter opposing the “News Media Bargaining Code” as it is today.

Google says that it would be forced to give an unfair advantage to news media businesses, thus making Search and YouTube results “worse for you” This entails providing that “one group” with “information that would help them artificially inflate their ranking over everyone else, even when someone else provides a better result.”

In the context of YouTube, this means giving “large news publishers confidential information” about how the algorithm works. This disadvantages all other creators and “would mean you could receive fewer views and earn less.”

The next concern is Google being forced to “tell news media businesses ‘how they can gain access’ to data about your use of our products.”

There’s no way of knowing if any data handed over would be protected, or how it might be used by news media businesses.

Lastly, Google says these laws put the free nature of its services at risk.

Google has a separate open letter for YouTubers in Australia that criticizes how the law “prioritises the traditional news industry over smaller creators of content and the platforms where they find an audience.” One specific argument is how news media businesses can “demand large amounts of money above and beyond what they earn on the platform.”

The company is working to get changes to the proposed legislation, and will be providing ways in the coming days that users can get involved. The Google Australia Twitter account has updated its avatar to a yellow warning sign as part of this push.