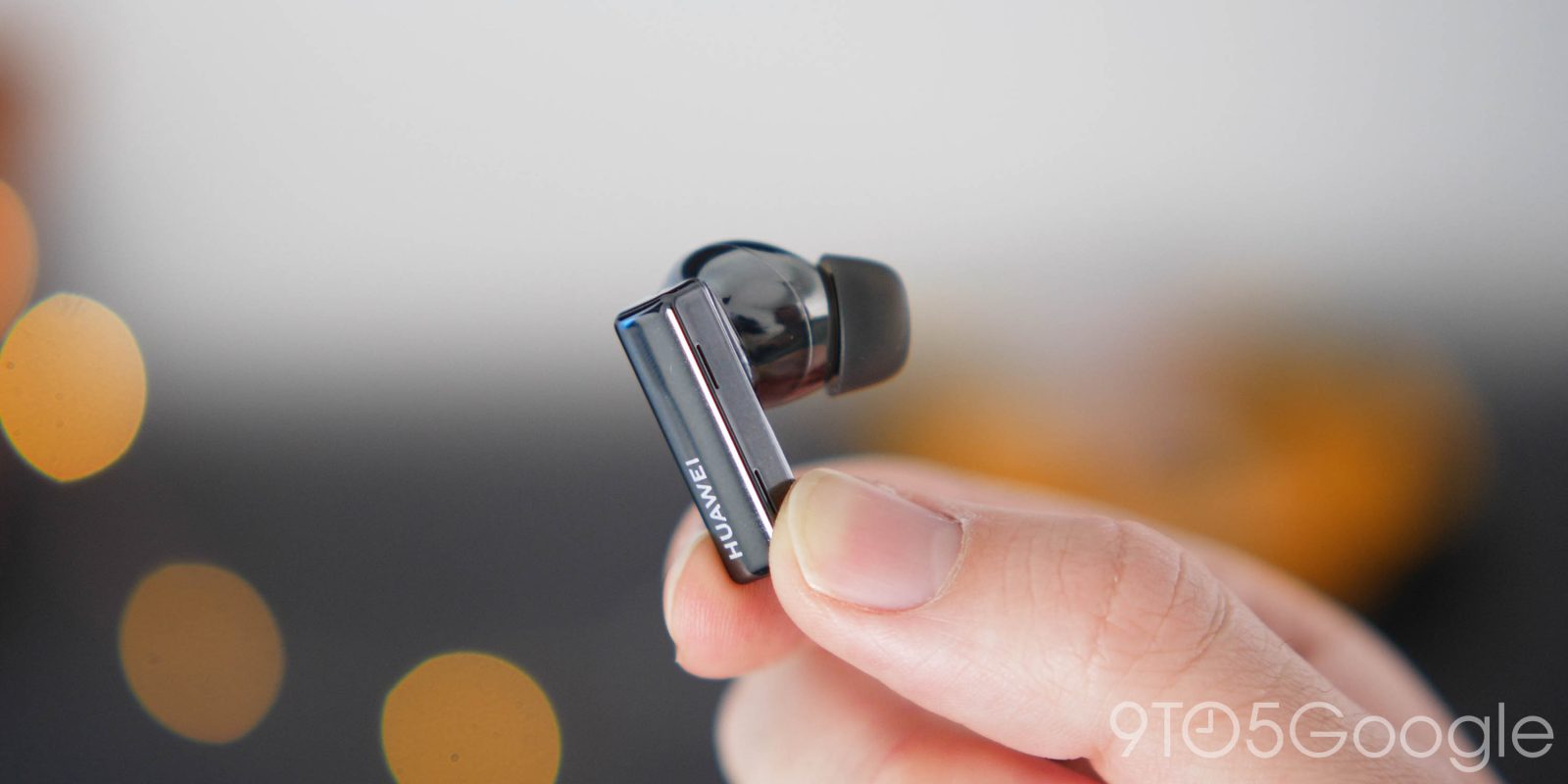 In lieu of an IFA launch event, Huawei has held a slightly delayed annual Developers Conference and used that as the vehicle to launch some new products including the FreeBuds Pro, Watch GT 2 Pro, and some other notable hardware.

Every single manufacturer now has their own version of wireless earbuds. It makes sense, create a total package that keeps buyers in your mini-ecosystem. The problem is that Huawei’s ecosystem is becoming a tough sell, so there is far greater prominence on their accessories and extras that don’t necessarily rely on Google Play Services or the western versions of Android we all know and love.

The Huawei FreeBuds Pro are a proper sequel to the FreeBuds 3 earbuds that released exactly one year ago. Again, just like we said in our review of those buds last year, you could easily argue why would you buy what at face value look like an AirPods Pro replica, when you can get actual Apple AirPods Pro?

Again, you might want earbuds that work much more closely with your Android phone. As with any Android-focused Bluetooth earbuds, the FreeBuds Pro might be an enticing prospect thanks to said tighter integration with your Android smartphone. So how do they stack up?

Let’s not sugarcoat the design, it’s very similar to what you’ve seen before but, to be completely honest, with a nice twist on said hardware formula. Lazy design stereotype time: imagine boxy AirPods Pro and you’ve probably got a good idea of what the Huawei FreeBuds Pro look like — especially the white model.

So the FreeBuds Pro have a bulbous head and boxy stem design. They feel like a striking combination of styles and are impressively put together. The metallic “Silver Frost” finish is particularly enticing when very few OEMs are willing to adopt such a color.

My only concern is that this might age pretty quickly, but for right now, I like this colorway probably more than most and it helps differentiate from the “AirPods white” that seems to be the go-to for earbuds.

I do wish the carry case was substantially smaller. It’s not that the Huawei FreeBuds Pro case is huge, it’s just really large compared to other brands on the market. When side-by-side with the Pixel Buds case it is substantially larger. The matte gray-silver finish is prone to fingerprints too, which isn’t a complaint but something to note.

Imitation is the sincerest form of flattery, and the earbud shape is eerily similar to that of the AirPods Pro. We hate comparing to Apple’s own earbuds as much as you hate hearing it time after time, but it’s up to OEMs to differentiate — not us. Even the silicone earbud tips and speaker grilles have that oval-like shape that the AirPods Pro happen to be known for.

The biggest inclusion to the Huawei FreeBuds Pro is the that of enhanced noise cancellation. There are four distinct levels to choose from: Dynamic, Cozy, General, and Ultra. The “Dynamic Mode” is set as standard when first activated. I found this to be a little bit mediocre but when cranking up the settings within the AI Life app, you’ll start to notice the difference in background noise reduction.

“Cozy” is used for places with little noise and seems to work the least. The “General” mode lowered background noise down enough for my comfort levels but the “Ultra” option takes things up a notch further still. Using a noisy mechanical keyboard all day and listening to podcasts helped me focus quite substantially with clacks replaced with soft clinks as I battered the keys.

When out in public — a rarity thanks to a global pandemic — I found the “General” mode to be substantial enough when in parks, or public spaces. I would imagine a busy coffee shop or bustling cafe would require the “Ultra” mode to really help lessen sound creeping into your listening experiences.

I’m not in a position to rate these against the best noise-canceling earbuds in the business from the likes of Sony and indeed Apple. However, the difference between the Huawei FreeBuds Pro and the FreeBuds 3 is substantial.

As is often the case when I trial noise-canceling headphones, I tend to find the “enclosed” feeling a little bit uncomfortable for long periods in the earbud form factor. I also find it detrimentally affects the actual sound quality, the audio performance hit on the Huawei FreeBuds Pro is not major but I personally think it is noticeable.

I’d call the audio experience with those 11mm dynamic drivers: “crisp.” Whereas many other wireless earbuds try to boost the bass, the Huawei FreeBuds Pro feel more middling in my time with them. With good isolation, the sound profile has plenty of nuance, with wide spacious mids and bass that doesn’t lack oomph. When listening to vocal-focused tracks, there is real detail with excellent separation between background audio and lead vocals.

Instrumental portions of tracks don’t feel hollow or overly enclosed with ANC enabled either. The sound profile suits most genres, while those wanting a truly exceptional pair of earbuds might not be appeased, the Huawei FreeBuds Pro come offering a great “everyday” sound. I must say that the sound quality is a very substantial step up from the Huawei FreeBuds 3, which were released last year.

I’m not sure how much of a benefit the Kirin A1 audio chip has, but latency when watching videos has not been an issue. The stem design also means that you’ll be heard nice and clearly when on calls or even activating the Google Assistant on your smartphone — provided you’re using an Android device.

When fitted the Huawei FreeBuds Pro are absolutely fine, they’re not the most comfortable earbuds I’ve ever worn, nor are they the least. I’d put them right in the middle of the pack, probably just below the Pixel Buds but above the OnePlus Buds.

Put it this way, if the stem style earbuds you’re used to fit, then you’ll have no problems with the Huawei FreeBuds Pro. That stem really does help aide stability, while the earbud shape is generic enough that it will sit in most ears without wobbling or moving. I have found the silicone tip really helps keep them secure in my ears but I haven’t tried using them during workouts.

The touch controls are, well, pretty terrible in my experience. I’m not sure why Huawei decided that moving the touchpad activation area to the side of each stem was a good idea. The pinch control is novel but it’s when you want to swipe and tap that problems arise.

I won’t fault the accuracy of recognition of taps, swipes, and pinches. Instead, it’s just awkward to perform these moves when you’re used to swiping and tapping at the outwardly facing portion of similar earbuds. I can forgive it a little as this design decision does eliminate phantom touches and whatnot though.

You can customize all of the controls to quite an extent from within the AI Life application on your device. This is the hub for almost all new Huawei accessories and smart devices. It’s pretty intuitive and easy enough to grasp. It’s a little disappointing that there are no options to customize EQ settings though.

This is one area I was pleasantly surprised by the FreeBuds Pro. Each earbud has a 52.5mAh battery, which is enough to last a good few hours without dying. Overall in the space of a week, I have managed around 20 hours total from the case and earbuds before needing to charge when using noise cancellation quite extensively.

Having wireless charging is almost essential for myself with regard to earbuds, and thankfully, the Huawei FreeBuds Pro don’t need to be plugged in to charge. While I’m less bothered if a smartphone charges only via cable, wireless earbuds are just so much more convenient without needing to plugin.

The biggest criticism I have with the FreeBuds Pro is that they are a little late to the market, while they are pretty solid, most people will likely have a solid pair of earbuds already. However, if you are on the lookout for a pair of earbuds that offer some impressive noise cancellation and are willing to use an application to manage the added functions and features, then the Huawei FreeBuds Pro might prove to be an enticing prospect.

The Chinese firm might be in a troubling position within the smartphone space, but expect to see yet more investment in their wider device ecosystem as this is one area that Huawei provides compelling, affordable options that while having a hint of “Apple” flavor, are relatively easy to recommend.

If you’re willing to stump up the cash for a more “experimental” pair of buds, then be sure to check out the recently released Galaxy Buds Live. While we can’t say for certain what the long term future holds for Huawei with regard to Android, the Buds Live might receive more prompt support and updates.