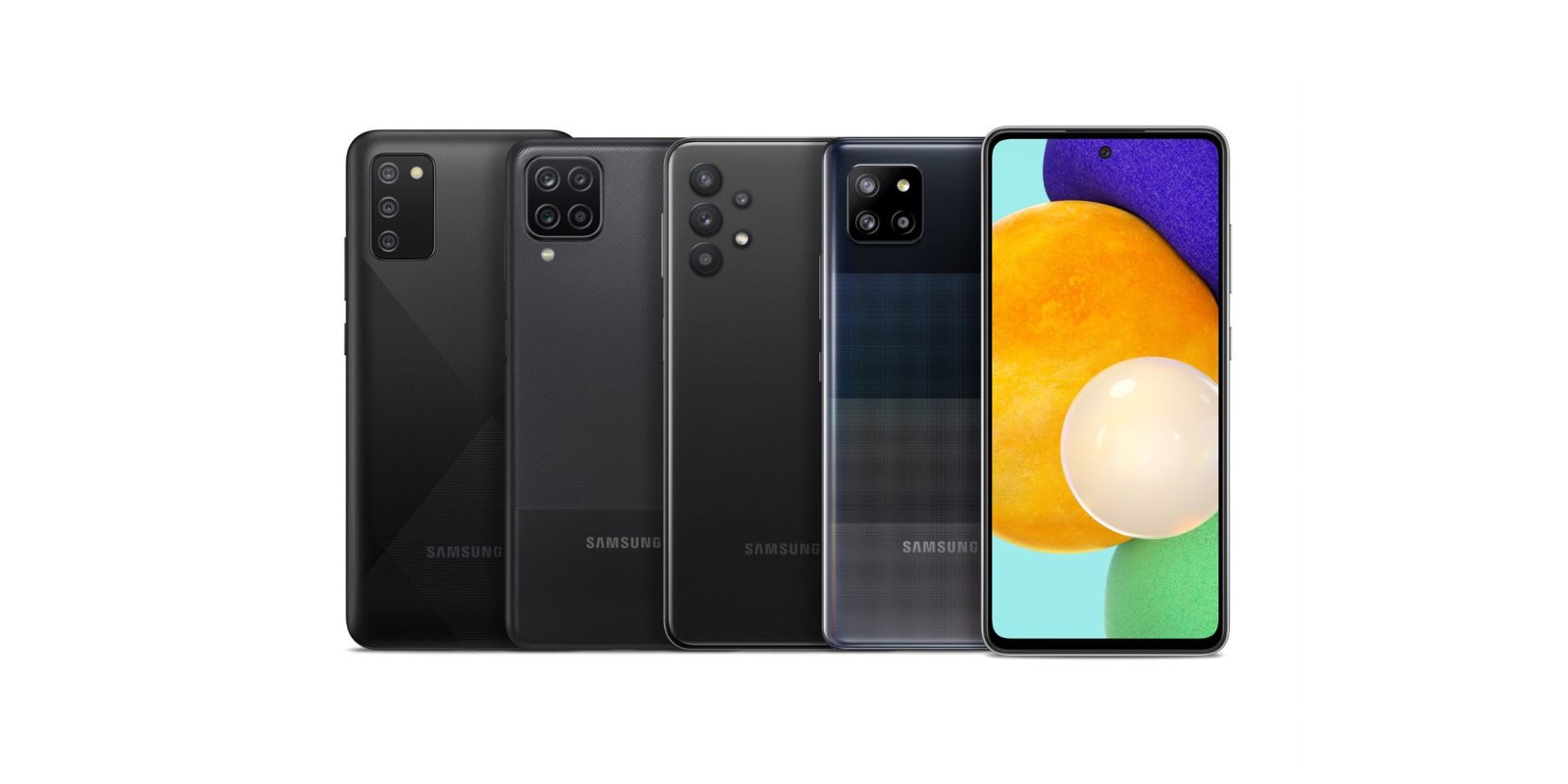 After launching internationally last month, Samsung is bringing its new entry-level and mid-range smartphones to the United States. The 2021 Galaxy A series consists of five new smartphones ranging from $109 to $500 with a ton of new features, and they’re all launching this month.

The headliner of Samsung’s 2021 Galaxy A series is the A52 5G, priced at $499. It runs on top of the Snapdragon 750G processor paired with 6GB of RAM and 128GB of storage (microSD too). It has a 6.5-inch AMOLED display at 1080p with an optical fingerprint sensor underneath. Everything is powered by a 4,500 mAh battery with 25W fast charging. It’s a pretty solid package already at that price, but the added features make it even better.

For one, the Galaxy A52 5G packs a 120Hz display, right in line with Samsung’s flagship devices. The phone also packs an IP67 water resistance rating. Rounding out the “firsts” for the Galaxy A series as a whole, the Galaxy A52 5G will see software support long past its 2021 release date, with Samsung promising three years of monthly support for the device. Android 11 is on board out of the box.

The Galaxy A52 5G also packs a hefty camera array. There’s a 64MP primary camera that offers optical image stabilization (OIS). Samsung also includes its Single Shot, Super Steady stabilization, and Pro Video on the A52 5G. There’s a 12MP ultrawide camera, a pair of 5MP cameras for macro and depth, and also a 32MP selfie camera. Finishing things off is a stereo speaker setup tuned by AKG and a 3.5mm headphone jack.

As mentioned, the Galaxy A52 5G will be sold for $499 unlocked at Samsung.com, but it will also be available from AT&T, T-Mobile, US Cellular, and Metro by T-Mobile as well. Sales start on April 9.

One step down, the Galaxy A42 5G knocks $100 off the price tag while being a Verizon exclusive. The phone packs a 6.6-inch 720p AMOLED display, but it’s only a 60Hz panel. There’s still an optical fingerprint sensor underneath too and everything runs on top of the same Snapdragon 750G.

Beyond that is where the changes lie. Memory is cut to 4GB while storage remains at 128GB with microSD. Water resistance and stereo speakers are gone and charging is limited to 15W. That’s a shame, because the battery jumps up to 5,000 mAh. The phone comes with Android 11, NFC, and a microSD card slot, too.

Also tweaked is the camera array. The premium add-on features are removed and the main camera is now a 48MP sensor. That’s backed up by an 8MP ultrawide camera and 2MP depth sensor. Then, there’s a 13MP selfie camera.

The Galaxy A42 5G will debut exclusively on Verizon in the United States and as a result, will be the only 2021 Galaxy A series device to support mmWave 5G, the rest only offering sub6 connectivity. Pricing lands at $399 and sales open on April 8.

The Galaxy A32 5G is Samsung’s most affordable device to date with 5G support, albeit only for sub6 networks. The rest of the spec sheet is pretty solid to back it up. The 6.5-inch 720p display is LCD, but also 90Hz. There’s 4GB of RAM and 64GB of storage, and the phone runs on a MediaTek 720 chip. In the camera department, there’s a 48MP primary camera, 8MP ultrawide, and 2MP depth. Rounding out the package is a 5,000 mAh battery with 15W fast charging, Android 11, NFC, a fingerprint sensor, and a microSD card slot.

Pricing for the A32 lands at just $279 and the phone will be available on April 9 from T-Mobile, Metro by T-Mobile, and Cricket Wireless.

Another step down the price ladder, the Galaxy A12 has a 6.5-inch 720p, 60Hz LCD display, a MediaTek P35 chip, 3GB of RAM, 32GB of storage, a side-mounted fingerprint sensor, microSD card slot, and another quad-camera setup. There’s a 16MP main camera, 5MP ultrawide, 2MP macro shooter, and 2MP depth sensor. An 8MP camera is up front for selfies. Samsung includes a 5,000 mAh battery with 15W fast charging and Android 10 is out of the box with Samsung promising two years of updates, so Android 11 shouldn’t be too far behind. You won’t find 5G support here, though, with only LTE on board.

Pricing for the Galaxy A12 lands at $179. The phone will be available from AT&T, Cricket Wireless, T-Mobile, and Metro by T-Mobile on April 9.

Rounding out Samsung’s current Galaxy A series lineup for 2021 is the super-cheap Galaxy A02s. At a $109 price, this phone is designed to hit the absolute basics, a mission it certainly accomplishes.

Samsung won’t start selling the A02s until the end of April, the 29th to be specific, but when it arrives it’ll be available from Verizon, Boost Mobile, Charter (Spectrum Mobile), Metro by T-Mobile, US Cellular, and it will also be sold unlocked.

At the moment, there’s no news on the Galaxy A72 5G coming to the US.