Pixel 5a with 5G Review: Uncompromised $449 value counters a wave of pricey flagships 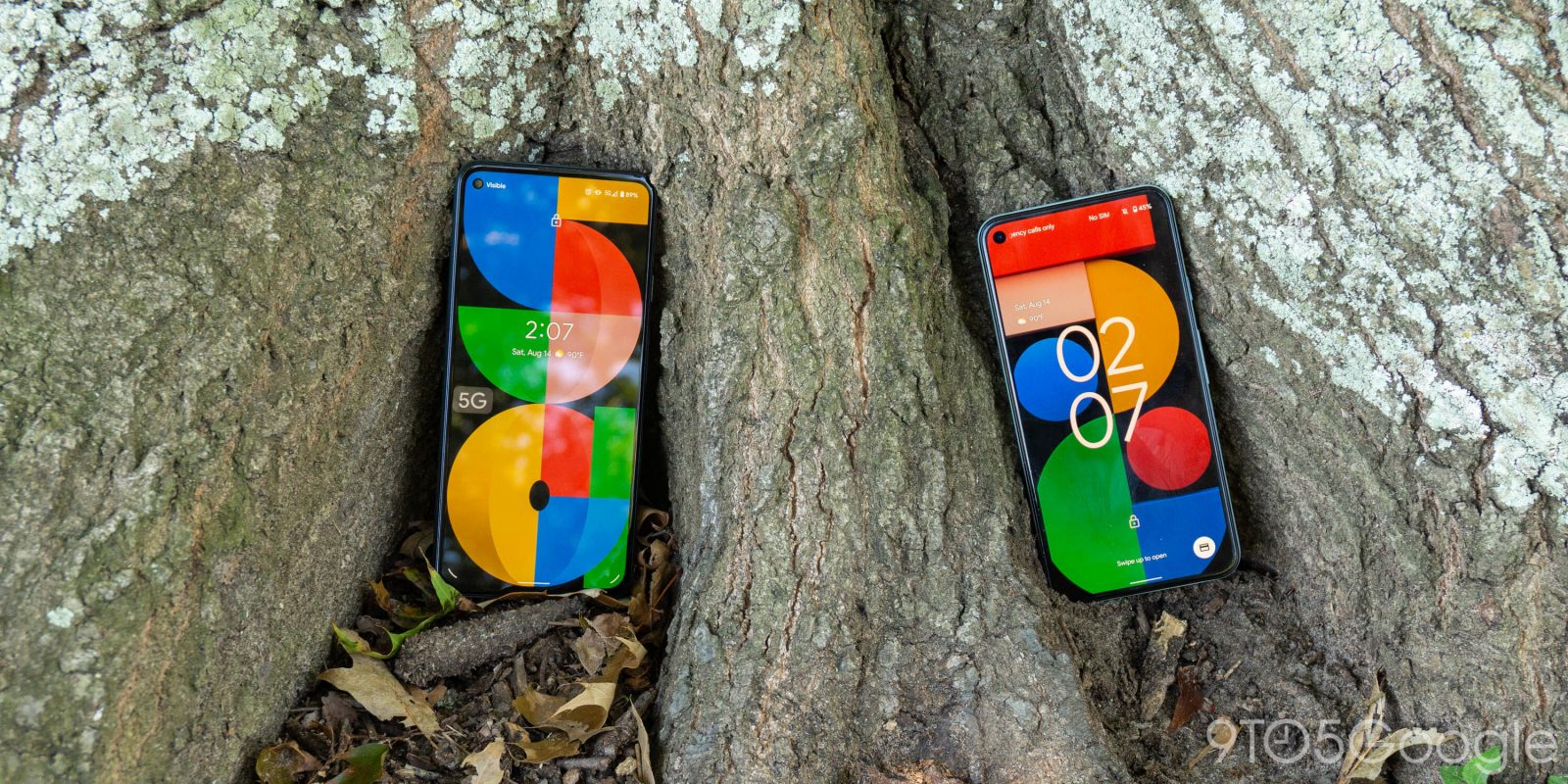 Ahead of its launch, many believed the Pixel 5a would simply be a rehash of the Pixel 4a 5G. However, having used it, I now believe the Google Pixel 5a with 5G carries the torch of the Pixel 5 to counteract costly flagship phones.

Last fall, Google released two upper-mid-range phones in the Pixel 5 and Pixel 4a 5G, putting the same chip and cameras into otherwise vastly different phones. The $699 Pixel 5 went the route of a flagship build with excess features like a 90Hz display and wireless charging features that were meticulously engineered to still work despite the phone’s aluminum build.

Meanwhile, the Pixel 4a 5G went the route of compromise, with a plastic body, no wireless charging, less memory, no water resistance, and a standard 60Hz display. Despite the significant loss of features, it was undeniable that the $499 Pixel 4a 5G was the better value of the two for most people. Our Damien Wilde said it best in his review:

In essence, the Pixel 4a 5G may have been a hard device in many ways to review but it proves to be a very easy Pixel to recommend. With that suggested $500 MSRP, it has one of the best cameras on the market, a lovely larger display, great audio, and all the rest of that Pixel magic without the associated price tag. Really, there isn’t much to complain about here. If you want a 2020 Google phone, this might actually be the best of the bunch.

With those phones now nearly a year in the rearview, Google has chosen to release the Pixel 5a with 5G, a phone with almost too much in common with the Pixel 4a 5G and Pixel 5 before it. It features the same core specs as the Pixel 4a 5G: a Snapdragon 765 processor with 6GB of RAM and 60Hz display of nearly the same size. With so many things staying the same, it was hard to see why Google would need to create the Pixel 5a at all.

Holding it in my hand, the Pixel 5a tells a different story. The first thing you’ll notice is that it has a certain heft. Despite how it looks and how it’s priced, the phone’s body is actually metal, which should offer much better durability than found in the three previous Pixel A-series phones. Over the metal, there’s an exterior coating that feels more durable, but less premium than that of the Pixel 5.

Also unlike any Pixel A phone before it, the Pixel 5a features IP67 water resistance, meaning it can theoretically survive being up to 1 meter in the water. While many appreciate IP67 for spills and the like, I found the water resistance gave me confidence to take the phone into a steamy room without concern.

Looking at it, it’s easy to think that the Pixel 5a’s sole color of “Mostly Black” is simply a different take on the “Just Black” of Pixels past. However, once you notice the forest green of the lock button, it’s suddenly easier to realize that the phone is actually an incredibly subtle dark green. In sunlight, the color is clear as day.

As for the lock button itself, Google has gone a new direction in this area as well, by including ridges rather than a smooth surface. The new official cases for the Pixel 5a with 5G even include those ridges for consistency.

Turning attention to the display, it’s easy to see where Google has managed to cut costs for this affordable phone, as the Pixel 5a has a fairly small viewing angle. Looking at it from an off-angle, whites almost immediately shift to pinks and greens. But unless you’re regularly looking at something blaringly white — such as the Google Docs app I’m using to write this very sentence — the color shift isn’t a major issue.

Google also downgraded from the 90Hz display of Pixel 5 to a more traditional 60Hz display. While it was definitely an unpleasant jump for my eyes, after a few days, being on 60Hz just felt normal again.

On the plus side, the Pixel 5a with 5G manages to downsize the selfie camera cutout, making the ever-present black circle less noticeable than it already was on last fall’s phones.

While there’s a slight bump up in width, a more tangible change to the 5a’s shape is the 20:9 aspect ratio versus 19:9 on Pixel 5. For the most part, the Pixel 5a just feels like a taller, thicker Pixel 5. Admittedly, the shape puts things like the notification shade just out of thumb’s reach, but the Pixel series has long been able to open the shade with a swipe of the rear fingerprint sensor. Android 12’s One-Handed Mode gesture should also make this a moot point later this year.

Between the power button ridges, the coated metal surface, and the overall size and weight, there’s no denying the Pixel 5a has a pleasant “hand taste,” as LG so vulgarly coined.

The Pixel 5a’s performance feels snappy, which is only right considering it’s the same upper-midrange processor as both of last year’s fall Pixel phones. By no means does this act like a phone that costs $450, though the same could be said for the $500 Pixel 4a 5G. The only time I managed to bog it down was when I was taking a series of photos in direct sunlight. Otherwise, the Pixel 5a can handle just about anything you can throw at it, including multitasking and running games at a decent framerate.

Where the Pixel 5a truly sets itself apart is in battery life. By all accounts, this phone is a tank, managing a nearly two-day capacity at 4680 mAh. With the always-on display disabled, I’m sure that would stretch even further. Generally speaking, I have only needed to charge the Pixel 5a with 5G every other day, with an exception for an hour-long Google Meet that ate through an insane amount of power.

Wireless charging is one feature unfortunately still missing from the Pixel 5a, but that may be for the best in the long term. The built-in “Adaptive Charging” feature, which slowly charges your battery overnight for the sake of your battery’s health, only works with wired chargers.

It’s a rare feeling to be confident that a phone can easily last the rest of the day when at 30% battery, even without using low power mode, but that’s exactly what this tank of a phone delivers. That said, in the ongoing Work from Home era, the ability to go longer without charging may not mean as much as it once did.

The Pixel 5a with 5G has almost exactly the same camera arrangement as the Pixel 5 and Pixel 4a 5G with its 12.2MP main sensor and 16MP ultrawide. As such, I see no need to linger on the Pixel 5a’s camera capabilities. You can expect essentially identical quality to the flagship Pixel 5’s cameras, with the same flaw of slow image processing speeds due to the removal of the Neural Core after the Pixel 4.

You can see some examples of the Pixel 5a’s camera quality below or view a gallery of full-resolution shots in our Google Photos album.

The only physical difference is the lack of a “spectral / flicker sensor,” which helps the camera adapt to the flicker rate of things such as displays and fluorescent lights. In practice, this may mean that the Pixel 5a might not be the best for taking pictures of screens, but I’ve not noted any issues in my time with it.

If you’ve used a Pixel phone in the last few years, you likely know exactly what to expect from the Pixel 5a: a version of Android that goes its own direction while managing to stay “pure.” That means no bloat in the design, no obnoxious unremovable apps (beyond some of Google’s own), and an overall experience that doesn’t need flagship specs to run smoothly.

The best parts of the Pixel series software are nearly all powered by the Google Assistant, with Google’s phones remaining the sole arbiters of the “New” Google Assistant experience. The Pixel 5a also practically sells itself with features that appeal to everyone, like Assistant Call Screening (automatically filter out most spam callers without ever ringing your phone) and Hold For Me (let the Google Assistant wait on hold instead of wasting your day listening to muzak).

Better yet, the Pixel 5a should receive the upgrade to Android 12 very early into its lifespan, promising a reimagined design and a more personalized experience. After that, upgrades should arrive monthly through at least Android 14, which is more than can be said for most phones in the price range.

I cannot write about this phone without making mention of the vibration. Whether it’s the metal body of the phone or perhaps the thicker design allowing a larger mechanism, the vibrations of the Pixel 5a are strong. If your phone vibrates while laid flat on a table in the next room, there is no missing the sound. In the settings app, these can be toned down by half to a more reasonable level, which I promptly did.

Another important aspect of the Pixel 5a with 5G is its audio quality and capabilities. While the flagship Pixel phones ditched the 3.5mm headphone jack years ago, the A series has retained it, and the Pixel 5a is no different. More importantly, the Pixel 5a features a proper earpiece speaker at the top and a bottom-facing speaker.

By comparison to the flagship Pixel 5 and its under-display speaker, the affordable Pixel 5a is easily the better of the two for playing music, as it has a more full-bodied sound. Voices in phone calls are also slightly more clear. All of that said, the speakers on the Pixel 5a are still nothing special, with cymbals sounding particularly tinny at higher volumes.

Should you buy the Pixel 5a with 5G?

Taken as a whole, the Pixel 5a with 5G is unexpectedly one of the best phones — budget or otherwise — that Google has released to date. It packs specs more than good enough for most people, what feels like an everlasting battery, and the classic Google Pixel camera, all in a durable metal build. Even better, all of this is just $449.

Considering the Pixel 4a 5G and Pixel 5 have both been out of stock on the Google Store for weeks now, anyone in the market for a Pixel phone may not have a choice in which one to buy. Thankfully, the Pixel 5a with 5G is a worthy replacement for even the Pixel 5 until the Pixel 6 launches this fall.

More broadly, as flagship Android phones like the Galaxy S21 and the upcoming Pixel 6 Pro continue to rise in cost, the Pixel 5a is the perfect example of how to avoid the normal pitfalls of a “budget phone” while still paying less than $500.

The Pixel 5a with 5G is currently only available in the United States and Japan, and can be pre-ordered from the Google Store and Google Fi.