Pixel 7 vs. Pixel 7 Pro: Which is the right choice for you? [Video] 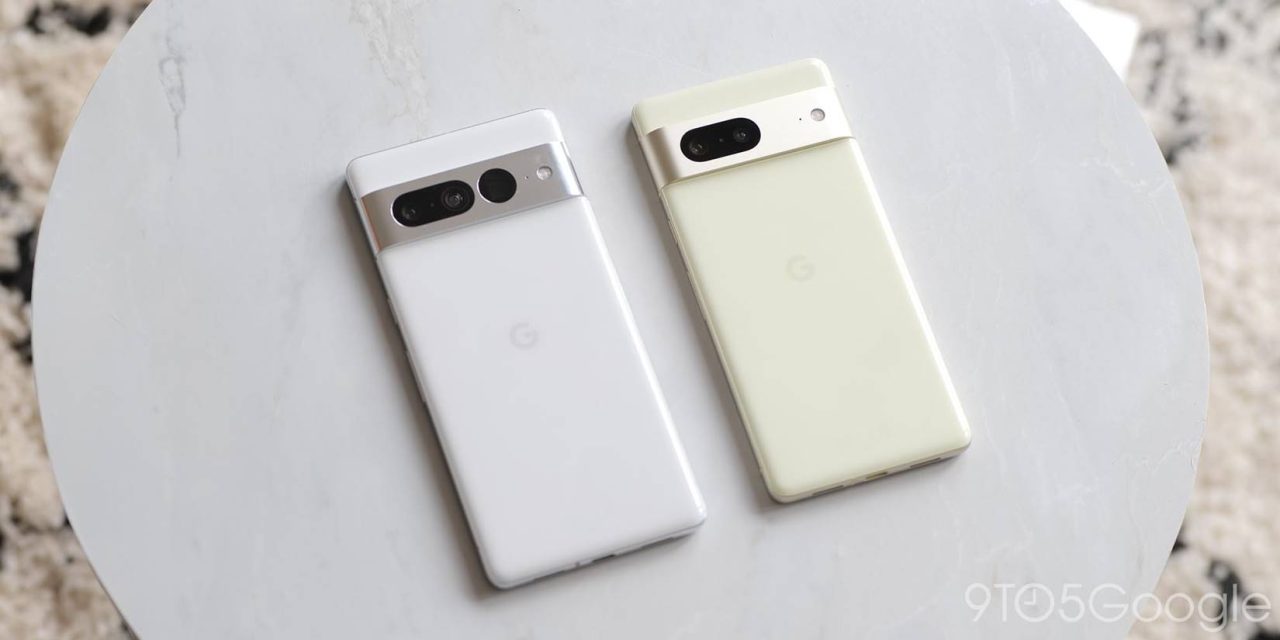 If you’re looking for a flagship Android smartphone in late 2022, odds are you’ve at least cast a glance toward the Pixel 7 and Pixel 7 Pro. What’s the difference and which Google smartphone is the right option for you? Here’s everything you need to know.

Before we get into the nitty-gritty and intense details, no matter which Pixel 7 series device you do end up choosing, you should be very happy. While the previous generation had a few problems that many struggled to overlook, the picture is clearer this year. Some of the “major” issues have been targeted and, hopefully, resolved in the long term.

Just like last year, if you’re coming from an older Pixel or any older device, we’re sure that you’ll be content on a day-to-day basis with the second-generation Tensor-powered device. In truth, we’re pretty certain you will not see a major difference from any other Android flagship — at least if you are not a hardcore gamer.

Even so, some of you on the fence might be wondering if the extra $300 is worth it between the Pixel 7 and Pixel 7 Pro. Let’s lay all of the available information out and determine which is a better buy for you.

Video — Google Pixel 7 vs. Pixel 7 Pro: Which is the right flagship Pixel?

The tried-and-tested Pro versus non-Pro paradigm returns once again for the Pixel 7 series. Google has made some changes to the Pixel 7 that create a greater differentiation between it and the Pixel 7 Pro.

Removing the matte black side rails has some unintended consequences as the device bezels feel even smaller on the Pixel 7. You’re still working with a flat FHD+ 90Hz AMOLED screen, which although smaller offers great viewing angles, smooth animations, and bumped maximum brightness of 1,400 nits.

There are a few minor tweaks to the Pixel 7 Pro’s curved screen. The screen curves have been softened, but it measures at 6.71 inches and is rated at 120Hz. Within the Settings section, you’re able to switch from QHD+ and FHD+ resolutions here too if you want potential battery gains.

It too has a higher 1,500-nit maximum brightness. Another potential bonus is the usage of an LTPO panel. This means that the refresh rate can dynamically switch and dip as low as 10Hz is specific scenarios to help improve power draw.

Whether you care about visual screen improvements, it’s important to note that the in-display fingerprint scanner has improved substantially. It’s not known for certain at this stage, but we believe that the Pixel 6a in-display scanner is being used on the Pixel 7 and 7 Pro this time around. Unlocking is more consistent and reliable than it is on the Pixel 6 — even after numerous software updates and improvements.

You’ll probably notice a minor design change to the Pixel 7 series this year. The biggest visual change is to the “Camera bar,” which no longer is made purely of glass. Instead, this bleeds into the side rails with a metal covering. Cutouts only appear for the rear lens setup, which should mean less chance to break the camera lens covering plus added smudge protection.

On the Pixel 7, the camera bar is also aligned better with the Pixel 7 Pro. On the previous generation, the camera section was slightly higher. Google has evened things out for a more consistent look and feel no matter which you prefer.

Color options have changed this year too. The colorful lineup of the Pixel 6 series has been refined with more muted tones. Annoyingly glossy finishes are once again being used, with only two stand-out colors to choose from this year. That would be the Pixel 7 in Lemongrass and Pixel 7 Pro in Hazel. Obsidian and Snow options are available for the duo too.

Tensor G2 is the only major internal upgrade this year. It isn’t a massive jump in terms of performance and is still based upon the 5nm manufacturing process. Google’s approach with Tensor and Tensor G2 has been focused more on AI and GPU performance rather than outright raw processing power. It’s said to offer up to 60% boosts in machine learning tasks all while being up to 20% more efficient. The reality is that performance in all but a few scenarios like gaming is smooth.

All base models start at 128GB with 256GB options available. You can pick up a Pixel 7 Pro with 512GB storage, but only in selected regions.

Android 13 ships with the Pixel 7 and 7 Pro with fewer issues but with the same Material You flavorings as found on the previous generation. A sprinkling of exclusive features has been added to help differentiate the Pixel 7 from its predecessors.

A number of the software-based tweaks here are aimed at improving the experience given the enhanced hardware on offer. Face Unlock is the most notable new inclusion. This software-based biometric security option lets you scan your face to quickly access your device, but it cannot be used for payments.

At some point in the next few weeks, you’ll also get added security with free access to the Google One VPN. This is ordinarily only available to Google One subscribers on the 2TB and above. Selected features in Google Photos have moved behind a paywall in recent years, but Pixel 7 and 7 Pro owners have access to the new Photo Unblur feature. This can be used on any photos you have taken with your device or indeed any photo in your Google Photos library. Machine learning enhances and cleans up images to remove blur and improve the overall image.

The other notable addition to the Pixel 7 series is a new Digital Wellbeing option that allows you to track snoring and coughing while sleeping. When a Bedtime schedule is set, your phone is able to identify coughing or snoring when your phone is charging at your bedside.

Luckily, a number of these functions are coming to older devices, but many do require a Tensor processor for enhanced processing. That means that some functions will remain on Pixel 7 and 7 Pro exclusively… for a little while at least.

Google has stuck to the five-year update commitment. This consists of three full OS upgrades alongside two further years of regular security patches. Based upon those promises, you’ll get Android 16, but after that, it’ll be monthly OTAs for added device protection. Support is set to cease for the Pixel 7 series in October 2027.

Google has learned from previous mistakes of small batteries, but because there are some changes to the size of the Pixel 7 compared to the Pixel 6, a few sacrifices have been made. Sadly, that means that the battery has an almost 10% step down to accommodate the smaller chassis. Luckily, this doesn’t seem to have affected the lifespan in our experience.

The Pixel 7 can last all day without pressure or problems. Luckily, for the Pixel 7 Pro, there are no such internal cell size decreases. It’s a tried and tested 5,003mAh battery once again. As always, it’s important to note that battery longevity is a very subjective area.

Your usage patterns might provide exceptional lifespan, while others may encounter longevity issues in their own usage. In most cases, all-day lifespan is assured even with the Pixel 7’s smaller internal cell.

An annoyance is the slow charge speeds. The Pixel 7 series is rated at 30W but with caps on both devices at 21 and 23W respectively. In our experience, this is often slower in the real world, but very much toward the bottom end of the flagship charge speed spectrum.

At the very heart of the Pixel 7 and Pixel 7 Pro is Samsung’s 50-megapixel GN1 sensor once again. A huge upgrade last year, this time around it’s a case of refinements. That said, there are some changes to the Pixel 7 Pro that will make a big difference in zoom photos.

If you value the ability to punch in with enhanced zoom capabilities, then you might want to lean toward the Pixel 7 Pro. A newer Samsung GM1 telephoto zoom lens offers 5x optical zoom, which can now stretch all the way up to 30x thanks to some of the Super Res Zoom improvements. Images look better at all zoom ranges, but the software improvements also mean that 2x zoom on Pixel 7 is boosted, while the maximum digital zoom level is upped to 8x.

Elsewhere, the ultrawide angle lens on the Pixel 7 Pro has a dual purpose. By increasing the FOV from 114 to 126 degrees you’re able to get close-up macro shots using the ultrawide lens. This added utility is only available on the Pro version and is a great way to add utility without an unnecessary lens.

Although technically an Accessibility feature, Guided Frame is a new mode as part of Talkback that helps those with visual impairments frame and take selfies with voice assistant helping to achieve the perfect front-facing photo. This is joined by enhancements to the Real Tone image processing to ensure perfect skin tone reproduction no matter your complexion.

All of your favorite Pixel-exclusive videography features make a return on the Pixel 7 series. A number of new features have joined the camera systems on the duo this time around. 10-bit HDR video recording makes its bow on the Pixel series but is capped at 4K 30fps. Adding to that, 4K 60fps recording is also available on every lens including the selfie camera this time around too.

Google is one of the few OEMs that have enabled the ability to switch between rear lenses when shooting at this frame rate and resolution, too. The final new video recording mode is Cinematic Blur. Kind of like Portrait Mode for video, fake blur effects are added to video capped at 1080p 24fps.

Pixel 7 vs. Pixel 7 Pro: Which should I choose?

This year, the minor changes made to the Pixel 7 and Pixel 7 Pro are truly meaningful despite how little they appear to be. If you have encountered issues with the Pixel 6 series and are simply looking for reliability, then there are enough improvements to consider making the switch after just 12 months.

Choosing between the duo is simply a matter of what you prioritize. Like with the original Tensor-powered duo, the day-to-day experience is practically identical. In fact, the Pixel 7 has more improvements that make it an even greater entry-level to Google’s flagship lineup for 2022.

Two key hardware changes in the fingerprint scanner and the new Samsung Exynos 5300 modem could be enough to convince you to switch. What’s more of a stumbling block is the pricing. You’ll have to work out if a 5x telephoto zoom lens and some added camera functionality are worth the extra $300 over the base model. In most cases, we’d wager that it isn’t, but that is ultimately up to you.

Where can I get the best deal on the Pixel 7 or Pixel 7 Pro?

Are you insistent on getting the Pixel 7? The Pixel 7 retails for $599 in the US and can be purchased directly from Google, Amazon, Best Buy, Verizon, Target, AT&T, plus many more.

If you want what could be Google’s best flagship to date, then the Pixel 7 Pro is priced at $899 and available at stores including Google, Amazon, Best Buy, Verizon, Target, AT&T, plus many more.