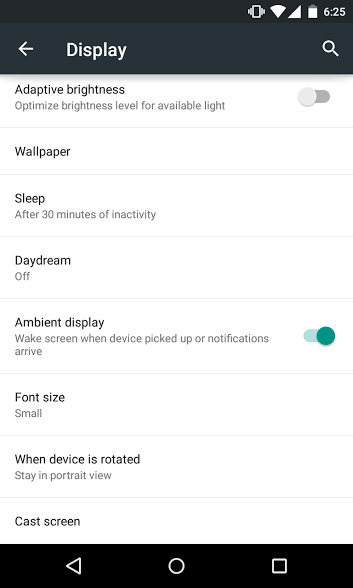 It’s pretty obvious that the Nexus 6 is based on the second-generation Moto X, so it’s no surprise that Motorola would borrow a couple of features from its current flagship smartphone. Thanks to a recently leaked build of of Android 5.0, we’re now a little more aware of some of the similarities between the two handsets.

Pictured above is a shot from Android Lollipop’s display settings that outlines a mode referred to as “Ambient display.” Google briefly talks about it on the company’s Android 5.0 overview, describing it as a feature that wakes up your device after picking it up or tapping its screen twice. This is almost identical to the 2014 Moto X’s Moto Display (formerly Active Display) functionality, which wakes up the phone when you get near it or pick it up.

So, if you’re a Moto X owner looking to jump ship when the Nexus 6 goes on sale, you’ll be happy to know that some of its finer points are being ported to Google’s new flagship smartphone.