Google’s Nexus 6 features a 6-inch QHD display with a resolution of 2,560 x 1,440, a 2.7GHz quad-core Snapdragon 805 processor, Adreno 420 GPU, 3GB of RAM, a 3,220mAh battery, a 13-megapixel rear-facing camera, and a 2-megapixel front-facing shooter. Designed by Motorola, this Nexus looks very similar to the Moto X (2014), but with a much larger display and limited color options.

Head over to the Play Store now to preorder a Nexus 6. Will you be picking one up?

Update: It appears that all Nexus 6 models have sold out, but myself and a few others were still able to place a preorder after the fact. By continuously refreshing the page, the “add to cart” button would appear and a few times it actually worked. However, sometimes you’ll be redirected to an empty cart. 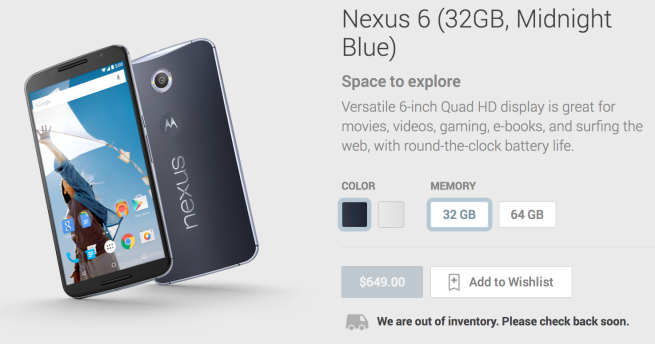 We’ve seen several reports via Twitter of others successfully placing an order after the device had “sold out.” Hopefully ou’ll have the same luck. I know this doesn’t help much, but if you’re still trying to get a preorder in, we wanted to give you a little burst of hope. Keep trying, you might get through as well.

Finally! Got the 32GB Midnight Blue.

@SrgntBallistic System is jacked. I had to refresh a ton.

Update #2: All Nexus 6 models are definitely sold out now.