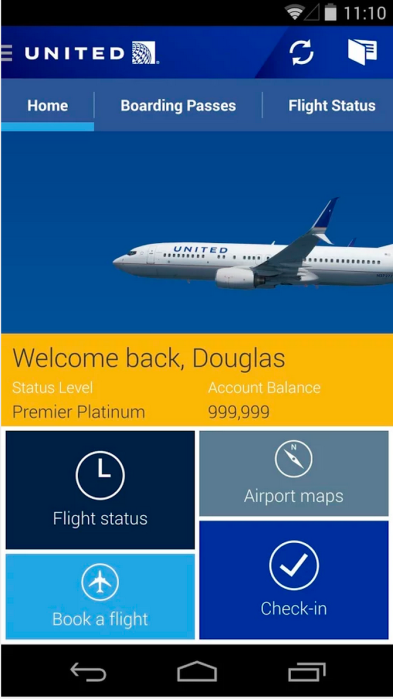 United Airlines announced today it’s bringing its latest in flight entertainment service, previously available in beta mode for laptops and iOS devices, to Android users with an update to its United app for Android smartphones and tablets. The app will allow users to view hundreds of TV shows and movies on Wi-Fi enabled flights:

Content, stored on on-board servers, is available on nearly 200 United aircraft, including the carrier’s entire Airbus A319, Airbus A320 and Boeing 747 fleets and its Boeing 777 aircraft that operate primarily between the continental United States and Hawaii… In the coming year, United will further expand personal device entertainment availability to hundreds of additional aircraft, including two-cabin regional jets and domestic and international aircraft that do not currently offer customers an on-demand entertainment option. By late 2015, most United and United Express aircraft will offer customers personal device entertainment, personal on-demand entertainment via seatback monitors, or live television.

Android users can access the service through the updated United Airlines app available on Google Play. They’ll also be able to check whether or not a flight offers Wi-Fi (and the entertainment service server) through united.com.

o United app version 2.0.18 adds software to browse and watch select movies and TV shows on your mobile device when connected to the “United_Wi-Fi” network.

o To see if your flight offers personal device entertainment check the Amenities in the United app within 24 hours of your flight departure. (Amenities subject to change until departure.)