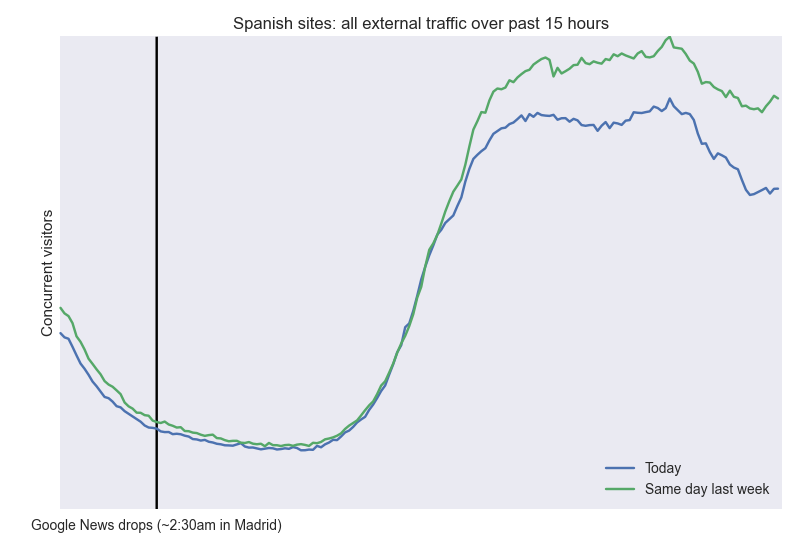 Spanish newspaper websites have seen their web traffic drop by an average of 10-15% after a law they lobbied for drove Google News out of the country. The figures were shared with GigaOM by web analytics company Chartbeat, which tracks around 50 Spanish news sites.

The law required Google to pay a fee for every story excerpt it displayed in search results, leading to the company – which generates no income from the ad-free Google News service – to close the service in Spain. Publishers clearly realized the implications right away, making a forlorn plea for the Spanish government to somehow ‘force’ Google to re-open the service …

There was some good news for website owners: while external traffic fell, traffic between publishers has increased as readers rely more on links between sites.

According to Chartbeat’s data, overall traffic to Spanish publishers hasn’t fallen by as much, but the amount of external traffic has declined sharply, while the amount of internal traffic — coming from other Spanish publishers — has risen. Schwartz said this suggests that readers are moving between different Spanish news sites more than they did previously, rather than coming to them from links at Google News and other sources.

German publishers learned the same lesson as the Spanish ones when they pressured Google into removing excerpts from links. Once they saw the resulting drop in traffic, most publishers changed their minds.