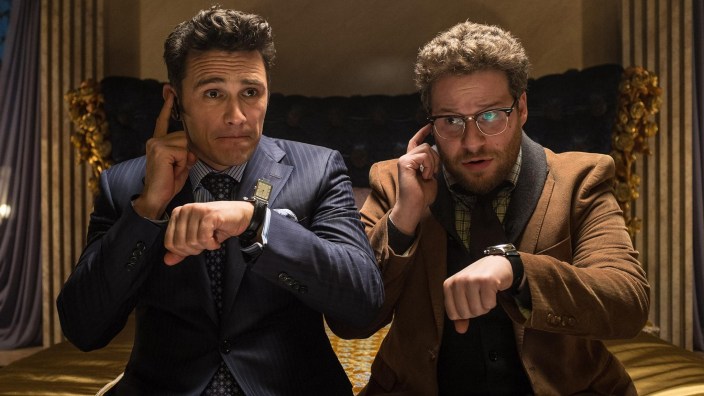 Update: Sony and Google have officially announced that “The Interview” will be available on YouTube, Google Play, and Xbox Video today, December 24th, at 1PM Eastern. The film will cost $5.99 to rent or $14.99 to own.

Google had the following to say in a statement:

Last Wednesday Sony began contacting a number of companies, including Google, to ask if we’d be able to make their movie, “The Interview,” available online. We’d had a similar thought and were eager to help—though given everything that’s happened, the security implications were very much at the front of our minds.

Of course it was tempting to hope that something else would happen to ensure this movie saw the light of day. But after discussing all the issues, Sony and Google agreed that we could not sit on the sidelines and allow a handful of people to determine the limits of free speech in another country (however silly the content might be).

So starting at 10 a.m. PST in the U.S., you can rent or buy “The Interview” on Google Play and YouTube Movies. It will also be available to Xbox Video customers and via www.seetheinterview.com.

Sony, according to a report from Brian Stelter of CNN, will release “The Interview” on YouTube. YouTube and Sony have reached a tentative agreement to put the movie up for rental on YouTube, according to the report.

Re/code is corroborating the CNN report, while also adding that the movie will be available for rental from the Google Play Store, as well.

Sony announced last week, that due to a lack of support from theaters and threats made by cyber hackers, it would not be releasing “The Interview” in theaters or online. President Obama, however, voiced his opinions on the matter earlier this week and said that Sony made a mistake by scrapping its plans to show the film because of the threat. Sony has since reversed its decision and will be releasing the movie, on Christmas Day, to more than 200 independent movie theaters. Now, online availability is also coming.

Details of Sony’s partnership with YouTube remain unclear at this point, aside from the basic premise that “The Interview” will be available for streaming rental on the service. The report cautions that the deal is still in somewhat early stages of negotiations and could fall apart. Sony is expected to officially announce the deal today, however. If the talks go through, the film is expected to be available for rental tomorrow, December 25th.

Negotiations between Google and Sony have apparently been going on for several days, but the two have struggled to come to terms on the financial aspect of the deal. Google is also, allegedly, concerned over making itself vulnerable to hackers by releasing the controversial North Korean satirical film. The plot of the film centers around assassinating North Korean dictator Kim Jong-un.