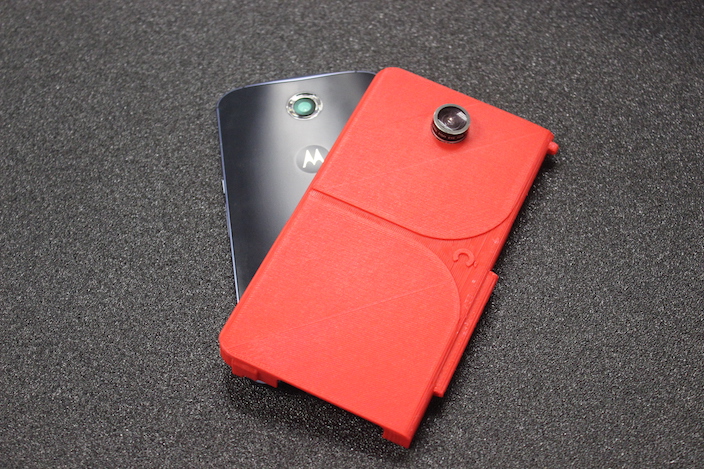 A few months ago, we visited Toronto-based Cordon Labs for some hands-on time with the work-in-progress Pinć VR headset case for Android-based smartphones and the iPhone. Fast forward to CES 2015 and we’ve once again had a few minutes to check out a new and improved prototype of the headset, now 20% slimmer and closer to becoming an accessory that could actually be pocketable without protruding through your pants. Read ahead for my first impressions of the Pinć and a brief overview of where I think it is headed.

Despite not having a booth on the CES show floor, Pinć is actually one of the cooler products here in Las Vegas. While some VR headsets like the Oculus Rift and Gear VR have rather large and bulky designs, the Pinć is a more practical $99 solution that can fold away and double as an ordinary—albeit modestly thicker—case for your smartphone. Pinć is also not taking a gaming approach, instead focusing on improving everyday tasks like shopping with a Minority Report-style user interface. The early prototype is rough, but shows vast potential.

I was provided with a demonstration of how this virtual shopping experience could exist and believe that Pinć could be a mainstay as the wearable market continues to evolve. While I don’t expect that people will ever walk down the street with this headset on their face ordering their favorite pair of skinny jeans, it has a practical use case for in the home and can be successful if enough third-party developers commit to the platform through the SDK that will be available later this year. Learn more about Pinć in our previous hands-on post and related video below.