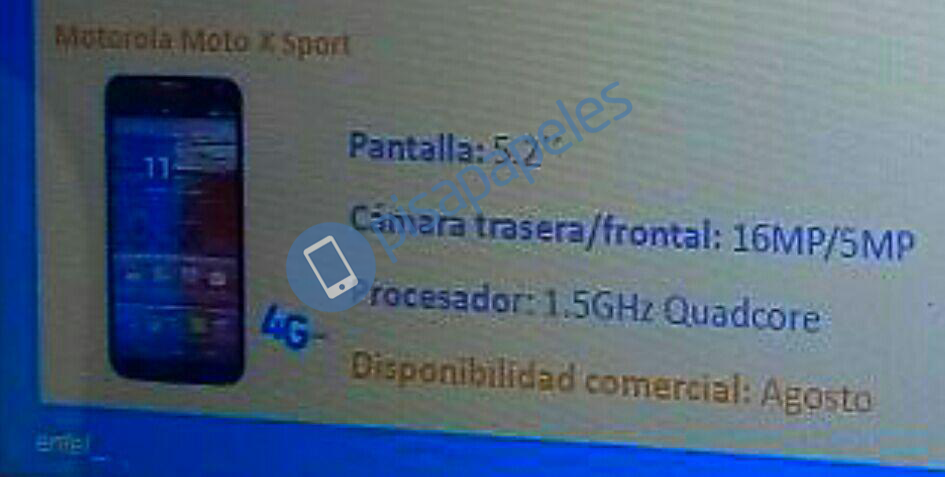 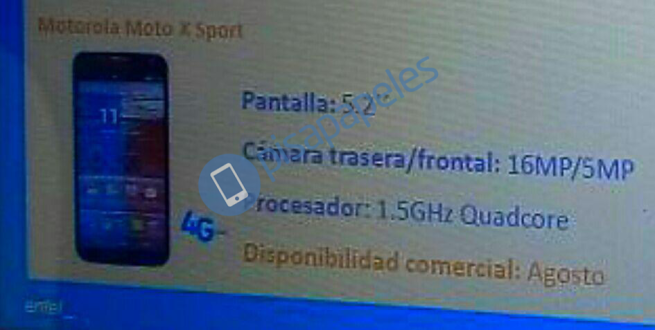 If a recent — slightly sketchy — report is anything to go by, Motorola could be set to announce new versions of its popular stock Android phones. A new Moto X “Sport” and a new Moto G have shown up in leaks which come from Chilean operator, Entel.

If this leak is worth its salt, we could see a more robust, durable version of the Moto X to go alongside the third generation Moto X. Little is given in the way of specs except for the mention of a 5.2-inch screen, 16MP rear camera, 2MP front-facing snapper, and a 1.5GHz quad-core processor. The image is blurry (to say the least) and doesn’t show a tremendous amount of detail. But if the specs are accurate, the device offers very little extra over the current Moto X. It has the same-sized display, more megapixels in the camera sensor (which doesn’t necessarily mean it’s a better camera), and it also happens to have a less powerful processor. Could this be a more mid-market device from Motorola? Who knows.

As for the “new” Moto G mentioned, it looks like the Chilean carrier is expecting a slight speed bump. The new 4G-equipped device is expected to have a 1.4GHz quad-core processor, compared to the 1.2GHz chip found within the current phone. As for the camera, it seems the Lenovo-owned company wants to pack in 5 million more pixels on to the rear sensor and 3 million more on to the front camera.

If the leak is genuine, we could see an August release for these new Motorola smartphones. That would also mean an announcement from Motorola very soon. For now though, I’d say these leaks are sketchy to say the least. Even if they’re genuine, there’s really not enough detail in imagery or enough on the spec-side to judge exactly what we should expect from Moto this summer.

For now, if you want to purchase a current and genuine devices, the 2nd gen Moto X and Moto G are available direct from Motorola for $299 and $179 respectively.