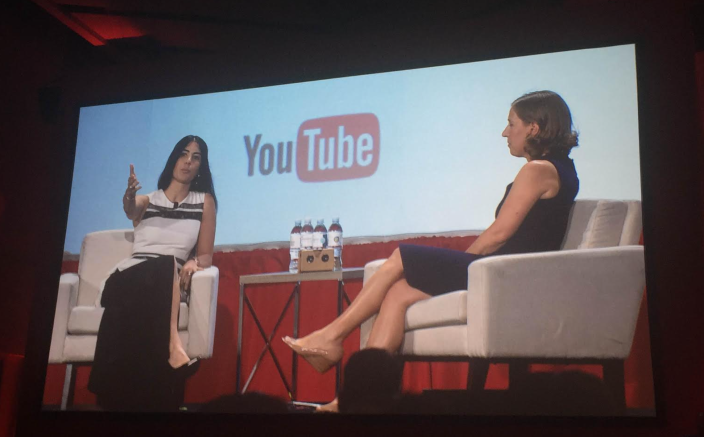 Following the VidCon keynote address by Susan Wojcicki earlier this evening, the YouTube CEO took a couple of minutes to sit with BroadbandTV CEO Shahrzad Rafati in a fireside chat and answer questions submitted by the community to social networks including Twitter and Instagram. Of note were comments on the yet-to-be released video subscription service, the way in which YouTube measures success, and Wojcicki’s opinion on YouTube stars experimenting with other platforms like Vine and linear TV.

Back in April, YouTube sent out an email to its partners — creators who monetize the content they upload to the video platform with pre-roll video and display banner ads — informing them that the company would soon launch a premium monthly subscription service which would remove all advertisements from the site for paying subscribers. Wojcicki was led to discussing the service in her fireside chat when Rafati asked about YouTube’s financial outlook as its audience shifts to mobile, where display ads aren’t visible and there’s less patience for pre-roll ads. Wojcicki defended YouTube’s business and referred back to statistics announced during her keynote address. She said that the number of channels making 6-figure amounts of annual revenue has increased by 50% in the past year, and that CPMs (money earned per 1,000 views) appear low when compared to television because YouTube is accessible worldwide and the TV CPMs used in these comparisons are usually limited to the United States.

Wojcicki went on to say that even though all signs point to creators who upload to the video platform doing better than ever (YouTube itself posted a loss in Q1, and didn’t get its earnings reported in Google’s Q2), paid subscriptions will be important. More mature forms of entertainment “usually have both ad-supported as well as subscription revenue,” she said. “I think both will be important for us in the future.” YouTube also continues to improve its advertising systems through tools like Content ID, which can identify videos containing copyrighted content and give the rights holder the opportunity to monetize or remove the offending video from the website altogether.

Rafati then, to big laughs, pressed Wojcicki on how she actually feels about YouTube creators experimenting with creating content on other platforms like Vine and broadcast television, particularly after they attain a large audience. To this Wojcicki said that “a lot of time these things are complimentary.” Famous YouTube creators will “do a book, be on linear TV, but they can reinforce each other and prove to reach an even larger audience that they probably wouldn’t have otherwise.” What’s important, she said, is that YouTube is still known as a place where new talents are born and discovered. “I do think it is [still] really possible for creators to be found.”

Finally Rafati, herself the chief executive of a company overseeing a lot of video content, asked Wojcicki about YouTube’s decision to move away from measuring total views as its metric of success in favor of watch time, or the amount of time viewers spend actually playing videos. Wojcicki says about this that longer watch times are a good indicator that the viewer actually enjoyed what they watched, and it can also lead to higher engagement.

“We want users to engage in the content, we want users to come and see the video, we want them to go to the next video,” she said. At least, watch times are a better measure of enjoyment than video views are. Video views aren’t a good measure because oftentimes a view is counted when the viewer has only watched 30 seconds (or even less) into the video, and YouTube videos are, on average, longer than those posted to many other platforms (over 4 minutes according to comScore).

Many web services, including Twitter and Medium more recently, will change their KPI, or key performance indicator, over time as they better determine what metrics are associated with high engagement (engagement being whatever happens on their platform – videos watched, comments, etc), so YouTube changing there’s doesn’t necessarily mean they’re trying to cover anything up.