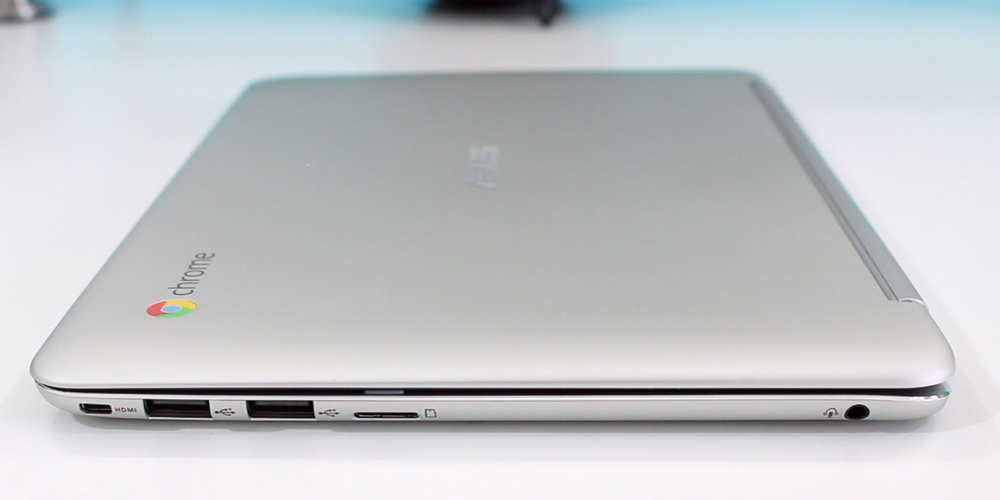 ASUS announced the brand new Chromebook Flip just a couple of months ago, and we’ve been able to get our hands on it. It comes shipped with the usual essentials in a rather unremarkable brown cardboard box. But it’s the notebook itself that’s more important here. It’s an all-metal affair with a 360-degree flip-able 10.1-inch touchscreen. On first impressions, it seems fantastic.

ASUS’ all-metal Chromebook measures in at 7.2 x 10.6 x 0.6 inches, making it a very portable device, and it only weighs 2 pounds. The outside of the notebook has a smooth-finished aluminum with nothing but the Chrome and ASUS logos on the front. Its screen resolution is 1280 x 800, giving it a pixel density of just under 150ppi which may not seem like much on paper, but it’s plenty sharp enough on a screen this small. What’s more, content seems crisp and colorful on screen (at least, when you have it at arm’s length).

For a Chromebook, this has a generous number of ports and controls. On one side there’s a power button, volume rocker, a couple of LED indicators and the power input. On the other side is a micro HDMI port, two USB 2.0 ports, a MicroSD card slot and a 3.5mm headphone jack. There’s a pair of stereo speakers underneath the notebook too. Once you have flipped it over, and you still want to get some work or communication done, you can type using a very Android-like virtual keyboard on screen.

But, if you’re a sane human who’d rather type on proper keys, you’ll be glad to know the Chromebook’s Flip’s keys are close to full-size, and are adequately spaced apart. That’s a pretty good achievement for a device which is essentially the same size as an iPad. Granted, it’s a little bit cramped compared to a proper keyboard, but it’s not horrible. In fact, I really like the feel of the keys on first touch. And it’s set inside this gorgeous hairline brushed aluminum with diamond-cut chamfered edges. There’s also a nice, smooth, click-able trackpad built in.

There are two models of the Chromebook Flip, both powered by a Rockchip quad-core processor with 16GB storage. There’s a 2GB RAM model which costs $249 and a 4GB model for $279 in the US. In the UK, the 4GB model will you set you back about £250. If you’re not convinced this is the Chromebook for you, check out our guide on the best Chrome OS notebooks on the market right now.