And not only do I think it’s cool, but it sets the iPhone line apart from anything that Android makers offer in 2015… 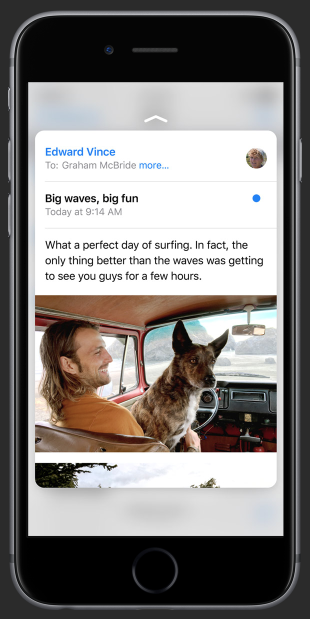 Let me be clear. Apple has fully implemented 3D Touch, this concept of a capacitive touch screen that not only responds to taps and pinches, but to pressure as well, first. No Android phone has ever offered anything like it (with one tiny recently-announced and yet-to-launch exception), and it would be relatively difficult for any of them to turn their development schedules around in the next 12 months and introduce a fully-featured copycat. 3D Touch required a lot of collaboration between the software and hardware teams at Apple, and that’s one of the company’s biggest strengths. Apple controls everything about the iPhone, and it can introduce features like this and make them work well. Of course, that also has its downsides sometimes.

This is one of those features where Tim or Phil stands on stage and says “This is something that only Apple can do.” They didn’t say that verbatim today, but they might as well have. Since manufacturers like Samsung, Huawei, OnePlus, Xiaomi, and LG don’t have much control over where Google takes Android as a platform, they have to do one of two things: Try to build these kinds of features on top of the OS, or invent them themselves and run their own proprietary OS completely. The former often leads to the half-baked features that many refer to as “bloat,” the worst enemy of Nexus purists, and the latter… well Samsung tried Tizen and that didn’t work out too well. Either way, it requires resources, man power, and loyal third-party developers to do right.

Even though I already have an iPhone 6, seeing this feature alone made me want to upgrade to an iPhone 6s (and that forgets all of the other things Apple did to bring the device up to 2015 standards). Right now, I can forgive them for their sometimes astronomical prices, their delusional and sometimes comical marketing that makes everything they do look amazing, and their pompous attitude. I really want to own a phone that can let me quickly peek at the flight information someone sends me in a text, a phone that lets me peek at an Instagram video without actually opening it, and a phone that integrates this new interaction method on such a deep level throughout the OS. And, let me reiterate, introducing robust developer APIs is key.

Sure, when it comes to sheer functionality, Android phones can mostly reproduce similar actions to the ones Apple is advertising. While the iPhone has always been restricted to just icons on the home screen, you can of course add a quick shortcut or widget to your Android home screen and jump to the selfie cam. That’s great. You can add a shortcut to the home screen to quickly add a contact. Awesome. Android is an open platform, so there are of course things that 3D Touch introduces functionally to iOS that have long been possible on Android. But no Android phone currently has hardware or support for developers to create new experiences the same way 3D Touch does.

What Apple has baked-in with its quick peek emails, Live Photos, and icon shortcuts may be less than “thrilling,” but as is the case with every other time Apple introduces a new piece of hardware (and API to go with it), developers are really going to run with this. Games, social media apps, photography apps, and mapping applications can tap into 3D Touch, and who knows how cool things could get by the end of the year. And the Apple Watch-born Taptic Engine, which helps the user feel feedback from using 3D Touch across apps, is really nice.

Check out the iPhone 6s ad:

To boot, this concept of “peeks” and “pops” — seen in the ad above, which looks very satisfying to use I might add — is going to sell this feature to the masses. From an Android users’ perspective, the Home Screen shortcuts are definitely one of those “My Samsung Galaxy S5 has done that for years!” kind of things, but to an iPhone user they will look like a spectacular new way of using a smartphone. Apple did them really well. But what matters is that after these devices are in the hands of people, developers are going to incorporate this standardized 3D Touch into their own apps. And Android phones are going to be left behind, until the hardware becomes commonplace and Google integrates it into Android — just like what happened with fingerprint support in Marshmallow.

It’s my gut feeling that 3D capacitive screens are going to very soon be yet another fundamental smartphone hardware feature, and phones without it are going to very soon feel as outdated as a phone without a front-facing camera or a fingerprint sensor. My Nexus 6 is going to feel archaic soon, and my bet is that the new Nexus 5 and 6, set to be announced later this month, will feel a bit on the “behind the times” side of things very soon. This time, Apple was actually first, and they definitely did things well, too.