Specifications compared: HTC One A9 vs. HTC One M9 and One M9+

Yesterday afternoon, HTC finally unveiled its long-rumored ‘Aero’ smartphone, officially named the HTC One A9. While it retains the unibody metal design that made the One series so popular, it’s a far cry from previous models in overall styling and form factor.

To get the obvious comparison out of the way early, it looks like an iPhone 6/6s, and sits somewhere between iPhone 6/6s and 6/6s Plus in size. Obvious comparisons aside, we wanted to see how the spec sheet measured up against HTC’s current crop of flagship phones, and to see whether or not this new design comes with a compromise… 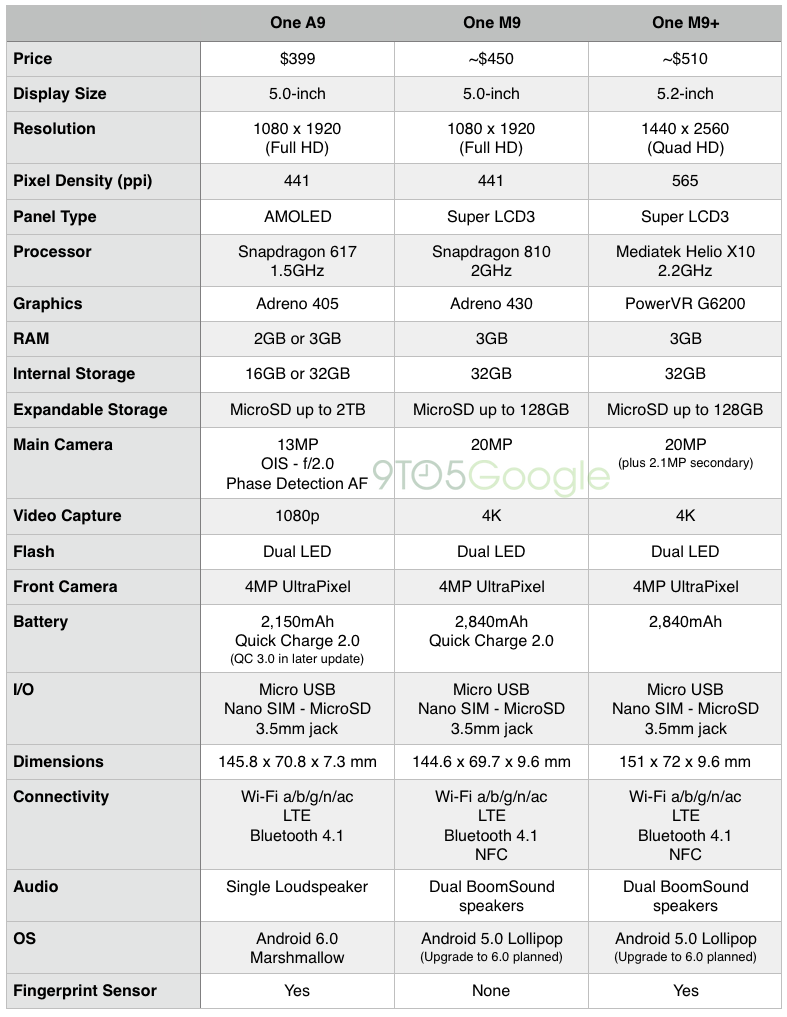 When it HTC announced the A9, it did so without the intention of replacing the M9, or M-series in general. This is more a high-end mid-range phone than a top-of-the-line flagship. Perhaps the two biggest indicators for this are the price and the processor.

At just short of $400, the One A9 is priced right near the top end of the mid-range market. But, with many of this year’s flagships now available for a similar price, you have to wonder whether it’s worth it. The Moto X Style is Motorola’s newest high-end device and comes with a QHD screen and Snapdragon 808 processor for $400. What’s more, looking around, you can find the HTC One M9 for only $50 more online, and the One M9+ can be found for just over $500.

The Snapdragon 617 is Qualcomm’s upgrade to the temperamental 615. It’s too early to tell if the mid-tier octa-core processor will perform really well, but if anyone can make it sing, HTC can. Of all the phones I tried with the 615 installed, it was HTC’s Desire range that performed best. It’s not as powerful as the high-end Snapdragon 810 found in the One M9, but that could be a blessing in disguise. The SD810 was often found to overheat. As for the Helio X10 in the M9+, it’s a processor normally reserved for specific markets and isn’t frequently found outside Asia.

One intriguing move by HTC was in the camera experience. The One A9 is the first HTC snapper to have built-in optical image stabilization and phase-detection autofocus. What that means in real terms is that shaky, blurry pictures won’t happen as often, especially in low light conditions. Sure, there are 7 million fewer pixels in the A9’s camera, but the sacrifice in picture size should easily be worth it for the overall quality of imagery. In short: This should be better than the One M9 and One M9+ at taking still photos. With the lack of 4K video recording though, the video recording won’t be quite as sharp.

On the design front, HTC basically took a rolling pin to the HTC One and flattened it out. Instead of the curved back that fits comfortably in hand, it’s gone with a completely flat back, built in to a device that’s only 7.3mm thin. That’s an impressive 2.3mm shaved off the thickness of the One M9/M9+. The slimmed down chassis has forced a compromise in battery capacity however, to the tune of 690mAh (or nearly 25%) less power. The less powerful processor and Doze-mode in Android 6.0 Marshmallow could ensure you don’t notice the drop as much as you’d think, but again, it’s too early to tell.

It’s on the front where we notice the biggest change in philosophy from HTC. Where previous One series phones boast powerful stereo BoomSound speakers, the One A9 has ditched them. Instead, it’s focussed on quality audio building in high-res audio support and has just one speaker on the bottom edge. Interestingly, despite the lack of front facing speaker, the One M9 hasn’t really lost its disproportionately large bezels. The phone is still taller and wider than the One M9. HTC will argue that’s because of the fingerprint sensor, a feature which is shared by the M9+ but not the M9.

The improved camera isn’t the only thing going for the One A9 over its siblings. It has an AMOLED display panel, marking the first time HTC has departed from the SuperLCD it’s been so proud of in the past. This should give us a full HD panel full of color and contrast. What’s more, the phone runs the very latest version of Android. It’s the first non-Nexus phone to run Android 6.0 Marshmallow, and the unlocked version will get updates almost as soon as Nexus owners do. That is pretty impressive.

Despite having an unimpressive spec sheet, the HTC One A9 could end up being one of the best phones HTC has ever released. Let’s just hope the experience of using it is knock-out, otherwise, it’s hard to see how the phone will stop the Taiwanese manufacturers financial slip in to obscurity.

HTC One M9 HTC One A9 smartphones HTC One snapdragon 617