Update: It looks like 1st, 2nd, and 6th taps get you 3 free songs on Google Play, and the 10th tap gets you a free Chromecast. Great deal.

It doesn’t look like Google has made any official announcement about this yet, but we’ve been tipped off today on a new Android Pay Rewards program called “Tap 10” that looks to give away free Chromecast devices and Google Play music downloads to some Android Pay users…

We’ve yet to see a promotional banner appear for the promotion ourselves, and it’s possible that only certain users with cards from specific banks are seeing the promotion. A quick Google search, however, reveals this image that clearly showed up today for one user when opening the Android Pay app.

“Ready! Set! Tap! Use Android Pay in store 10 times by Feb. 29 to score 3 free songs of your choice from Google Play Music,” the pop-up says.

Getting a few free songs may not be all too exciting, but the full giveaway details curiously mention free promotional codes for Chromecast devices. If one were to get one of these, that’s a free $35 streaming device just for using Google’s payments service. Not a bad deal, assuming you can figure out how to actually get one.

We heard in October of last year that Google was planning to launch some loyalty and rewards programs for Android Pay, but this looks to be more of a tactic Google is using to get you to use mobile payments in the first place. You can read the full rewards program terms and details over at Google’s Android Pay website. 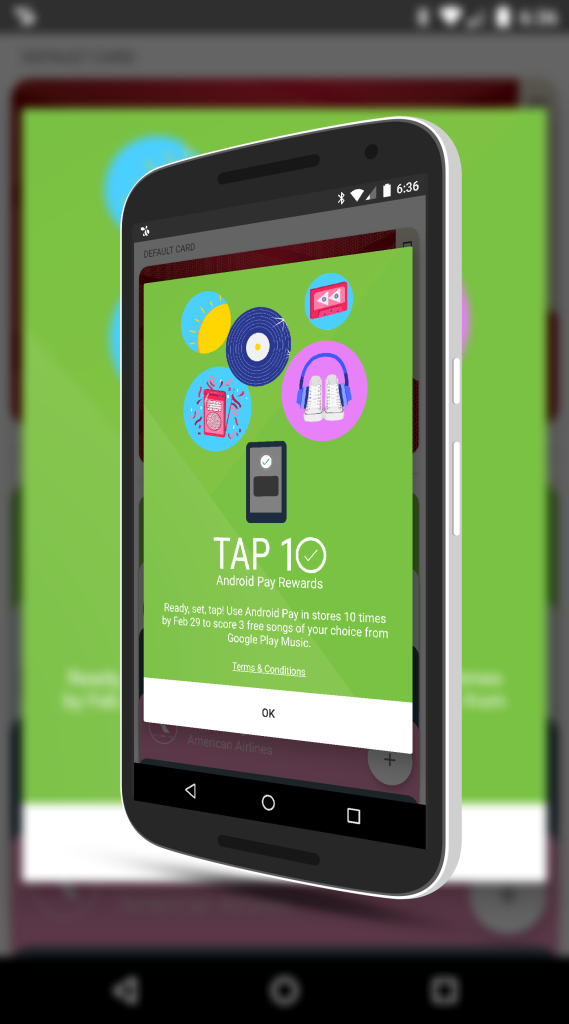 We’re almost positive that Google is about to make this program official and start pushing it on their social channels, so stay tuned for the full details.

I keep checking my Android Pay app for this promotion that's starting to show up for some. Tap 10. #AndroidPay pic.twitter.com/BxQ7RPMZEY