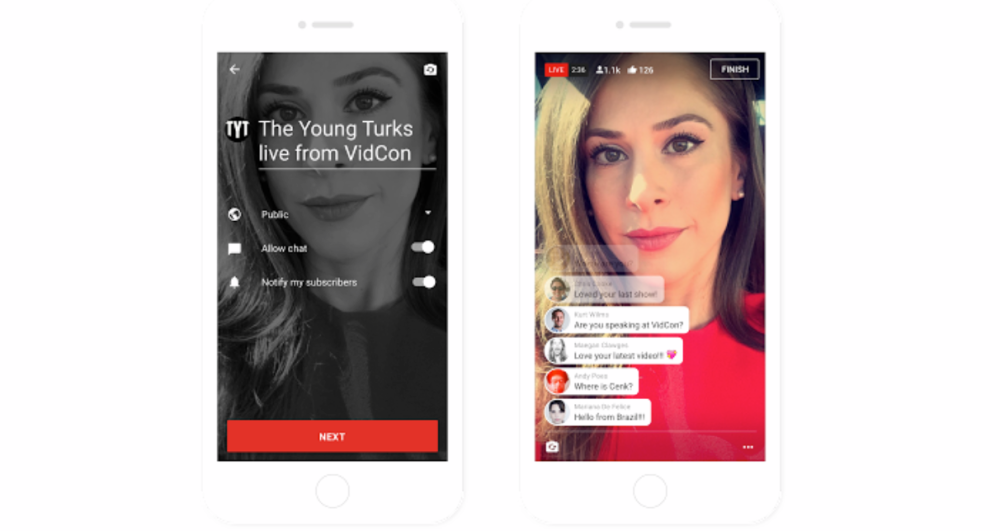 YouTube today announced that it is brining the ability to live stream content to its mobile apps on iOS and Android. YouTube’s announcement comes just a few days after Twitter integrated Periscope live streaming into its own app and as Facebook is heavily pushing live streaming capabilities.

YouTube says that over 21 million people tuned in to watch Coachella on YouTube this year, while it also notes of other past live streaming success stories like the Royal Wedding in 2011 and Felix Baumgartner’s space leap in 2012.

The company explains that live streaming from mobile will be very simple and not require any other apps or accounts. Users will simply have to tap the “big red capture button” and then take or select a thumbnail photo in order to start broadcasting.

The interface for live streaming on mobile is very similar to that of Periscope, with chat bubbles appearing overtop the live video feed in the lower left corner. Audience numbers and metrics are shown in the upper left corner, while the “Finish” button is in the upper right corner.

Live videos will be treated just like every other video on YouTube. Users will be able to search for them, find them through recommendations and playlists, and they will be protected from unauthorized use, as well. YouTube also touts that its live streaming will be “faster and more reliable than anything else out there.”

Today, we are announcing a new chapter in bringing the power of live video to creators everywhere. Soon, we’ll be putting the power of YouTube live streaming in the palm of your hands.

YouTube mobile live streaming will be baked right into the core YouTube mobile app. You won’t need to open anything else, just hit the big red capture button right there in the corner, take or select a photo to use as a thumbnail, and you can broadcast live to your fans and chat in near real time

YouTube live streaming from mobile is available today from select YouTube partners and will continue to rollout more widely as time progresses. The YouTube app is available on the Play Store for free.