Last year’s Samsung Galaxy A8 was one of Samsung’s first devices with a metal unibody design and it proved pretty popular. Today we’re getting our first look at the specifications for the 2016 refresh (via GSMArena).

GFXBench has recently listed the SM-A810 which is allegedly the 2016 version of the Galaxy A8. The listing reveals that Samsung has opted for a smaller display in this year’s model, bringing the size down from 5.7-inches to 5.1-inches while still retaining the 1080p resolution.

Under the hood the listing reveals the Samsung-made Exynos 7420 chipset in place of last year’s Snapdragon chipset. Also found on the listing is 3GB of RAM, and 32GB of storage (listed as 2.6GB and 25GB respectively in the listing). The rear camera is a 16MP sensor and the front facing shooter comes in at 5MP.

It’s unclear when Samsung will make this device official, but last year’s A8 launched on August 14th, so we shouldn’t have too long to wait. Previous leaks show the price at about $205. 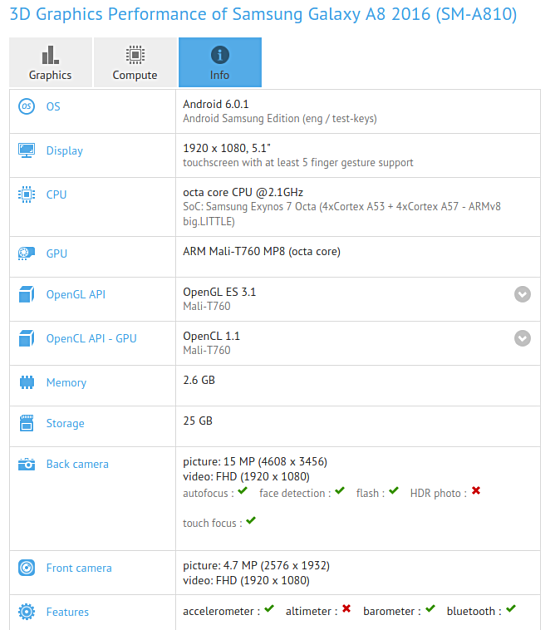