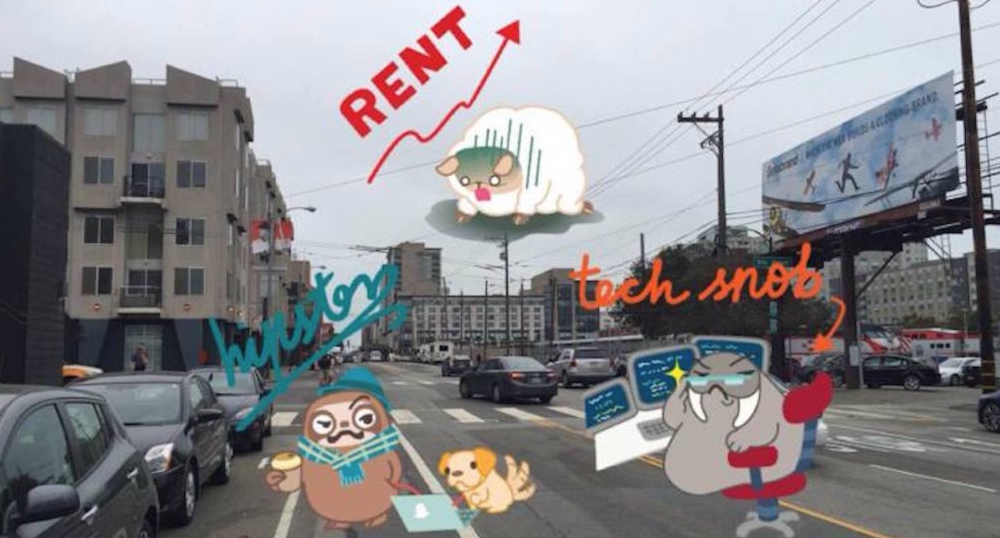 Hot on the heels of a new Snapchat-esque Stories feature coming to Instagram, Snapchat today has announced Geostickers, which is a new feature that gives users yet another way to decorate their snaps. Geostickers are location-based overlays that can be applied to images before they are sent, as well as sent via the messaging feature of Snapchat.

Geostickers shouldn’t be confused with Snapchat’s Geofilters, however. The difference between the two is that Geostickers don’t necessarily mention the location from which they are sent. Instead, they are caricature-like drawings that highlight landmarks, mock local trends, and more. Geostickers can also be moved around when overlaid on image, while Geofilters can not.

As you can see in the image above (via TechCrunch), Geostickers in San Francisco are used to make fun of the increasingly expensive rent in the area, mock the “tech snob” culture, and highlight local landmarks. Currently, there are 15 stickers available in the San Francisco area.

At launch, Geostickers are supported in 10 cities around the world: Honolulu, London, Los Angeles, New York City, Washington, DC, Paris, Riyadh, San Francisco, São Paulo, Sydney, and Paris. Snapchat hasn’t yet detailed what cities are next on the docket to receive the feature, but given the level of personalization that went into the San Francisco stickers, this likely won’t be the speediest rollout.

One the most well-received capabilities of Snapchat has been its location-specific features. For instance, Geofilters have grown to be huge draw for businesses when hosting events. Earlier this year, the company introduced the ability for anyone to pay to create custom Geofilters. In addition to events, many cities also have custom filters that are popular among locals and tourists.

Notably, Instagram’s new Stories feature lacks support for location-based filters and stickers, something that will likely hurt its chances at directly competing with Snapchat.

The latest version of Snapchat is available on the Play Store now for free.