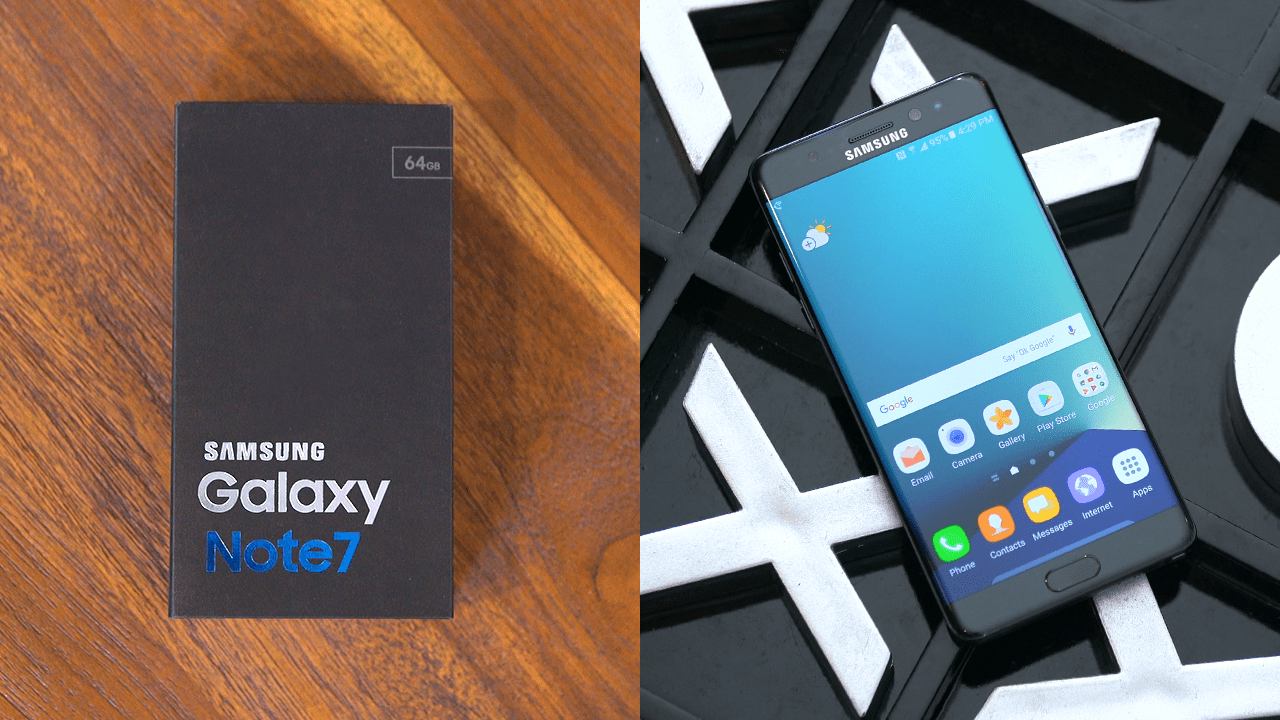 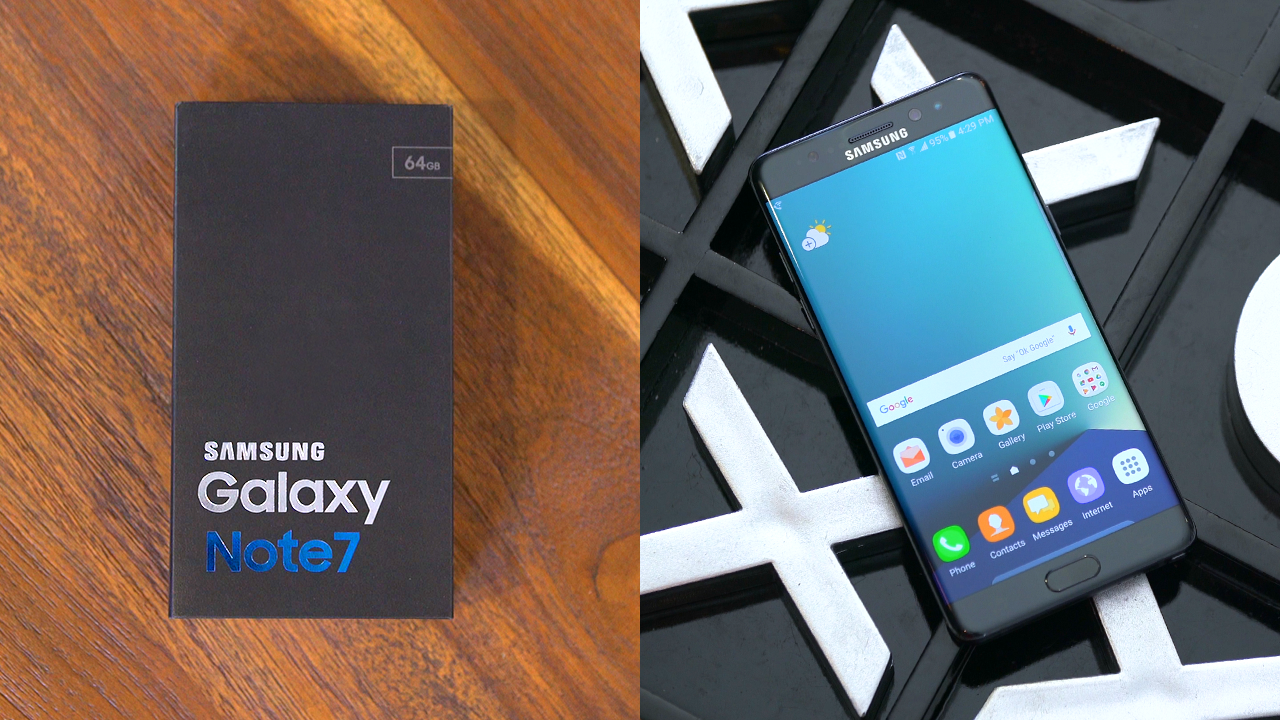 Meet Samsung’s Galaxy Note 7. We recently got a hands-on look at it at the official press event, but now it’s time to dig a little deeper. After our initial impressions of the phone, we decided to get a better perspective on everything involved here and let you know if Samsung’s latest and greatest is worth your hard-earned cash…

Inside of the box you’ll find the Galaxy Note 7 of course, along with your standard documentation and paperwork, underneath that you’ll find a USB type-C cable and wall adapter, some extra S-Pen tips and removal tool, Samsung branded headphones, and finally a couple of adapters. There’s a USB-C to USB adapter along with a USB-C to Micro USB adapter just in case you need it for some older cables or accessories you have.

If you’re curious about specifications, not much has changed here over the Galaxy S7 Edge, but inside the Note 7 we have a Snapdragon 820 processor, 4GB of RAM, and 64GB of internal storage with Micro SD card expansion up to 256GB.

Check out our unboxing and review video below:

This year Samsung didn’t change much about the design. Everything here closely resembles a mix between the Galaxy S7 Edge and Galaxy Note 5. There’s Gorilla Glass 5 on the front and back of the device with metal sandwiched in the middle, holding it all together. There’s not much more that can be expected from Samsung this time around. Don’t get me wrong the design is definitely nice, but it’s not a huge step up from last year’s Note, but that’s not necessarily a bad thing. It feels solid in the hand as well, but the glass design does tend to make it a bit slippery at times.

Around the front we have a 5.7-inch Quad-HD Super AMOLED display with a resolution of 2560 x 1440 ranking in with 518 pixels per inch. The Galaxy Note 7 also features HDR video capabilities that’ll bring another level of awesomeness to compatible content available. When compared to last year’s model there’s not a lot new here, but the design of the Note adds a curve to the side edges for some additional functionality and it all looks pretty clean. Also, like the Galaxy S7 and S7 Edge, the Note 7 is also water-resistant.

Basically, Samsung has taken the S7 Edge screen features and put them into the Note. You’ll find features like Tasks Edge, Apps Edge, and People Edge all of which provide quick shortcuts to apps and people you need to most. The Edge screen is also completely customizable within the settings as well for additional panels and options. 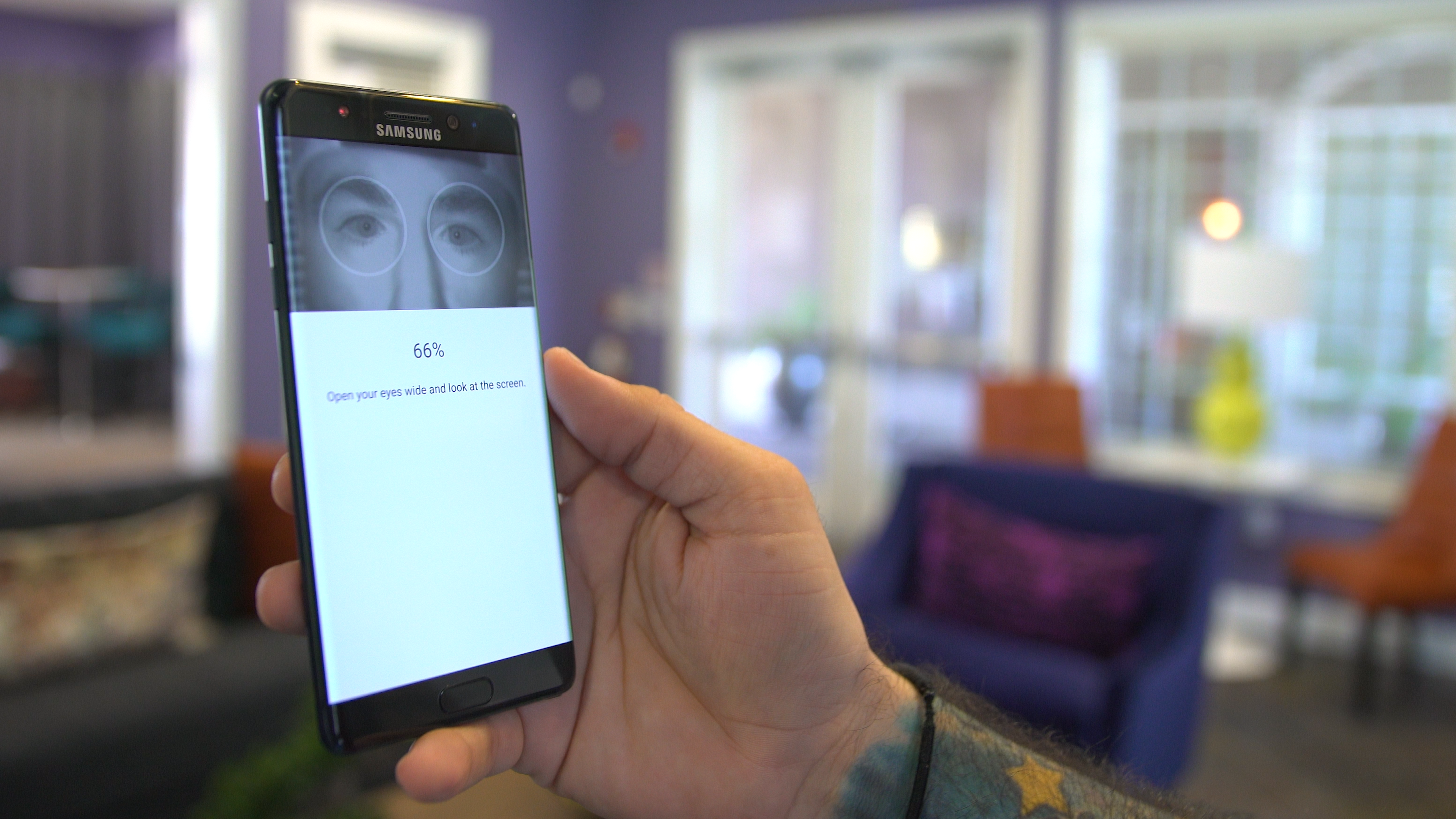 When it comes to software, most of the experience can be summarized in what you’ll use with the Note 7’s S-Pen and the various feature planted around the operating system. At launch the Note 7 is running Android Marshmallow and everything has been pretty smooth for me. Samsung has refined its software experience, but only time will tell how it will hold up after months of use, so be sure to hit that thumbs up button if you’d like to see a long-term review in the future… 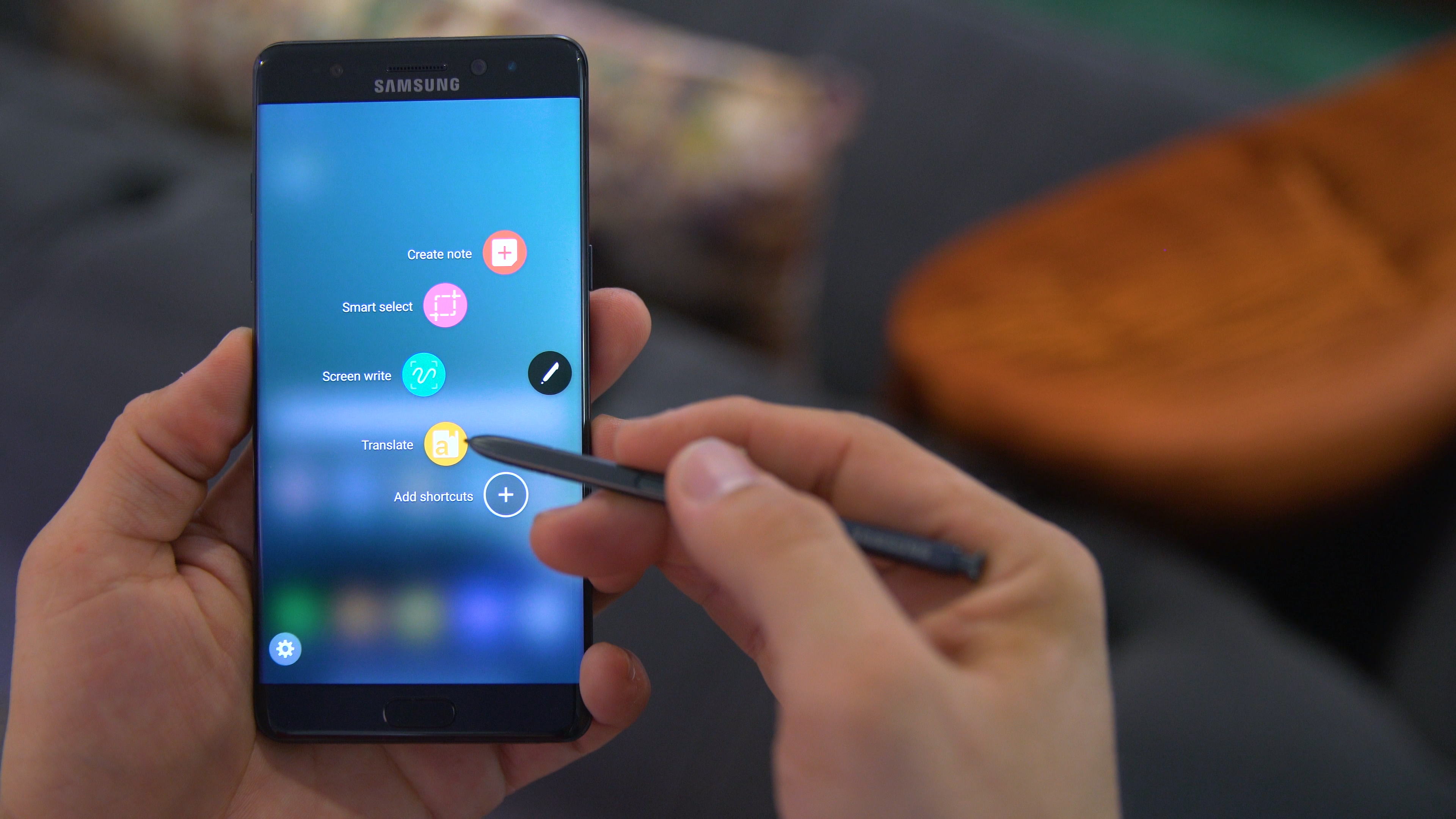 With the S-Pen Samsung has increased the precision over the Note 5, but also added a few new software features. First off, with Smart Select you now have the ability to create gifs from basically anything on the screen and is particularly helpful for videos. There’s also a new Translation feature which will allow you to hover over words with the S-Pen and translate between languages. Of course we have favorites like screen-off memo as we saw with the Note 5, but there’s a lot to enjoy if you’re into using the S-Pen, but for me the fun fades away quickly. To each their own, but the S-Pen requires a very specific kind of person. 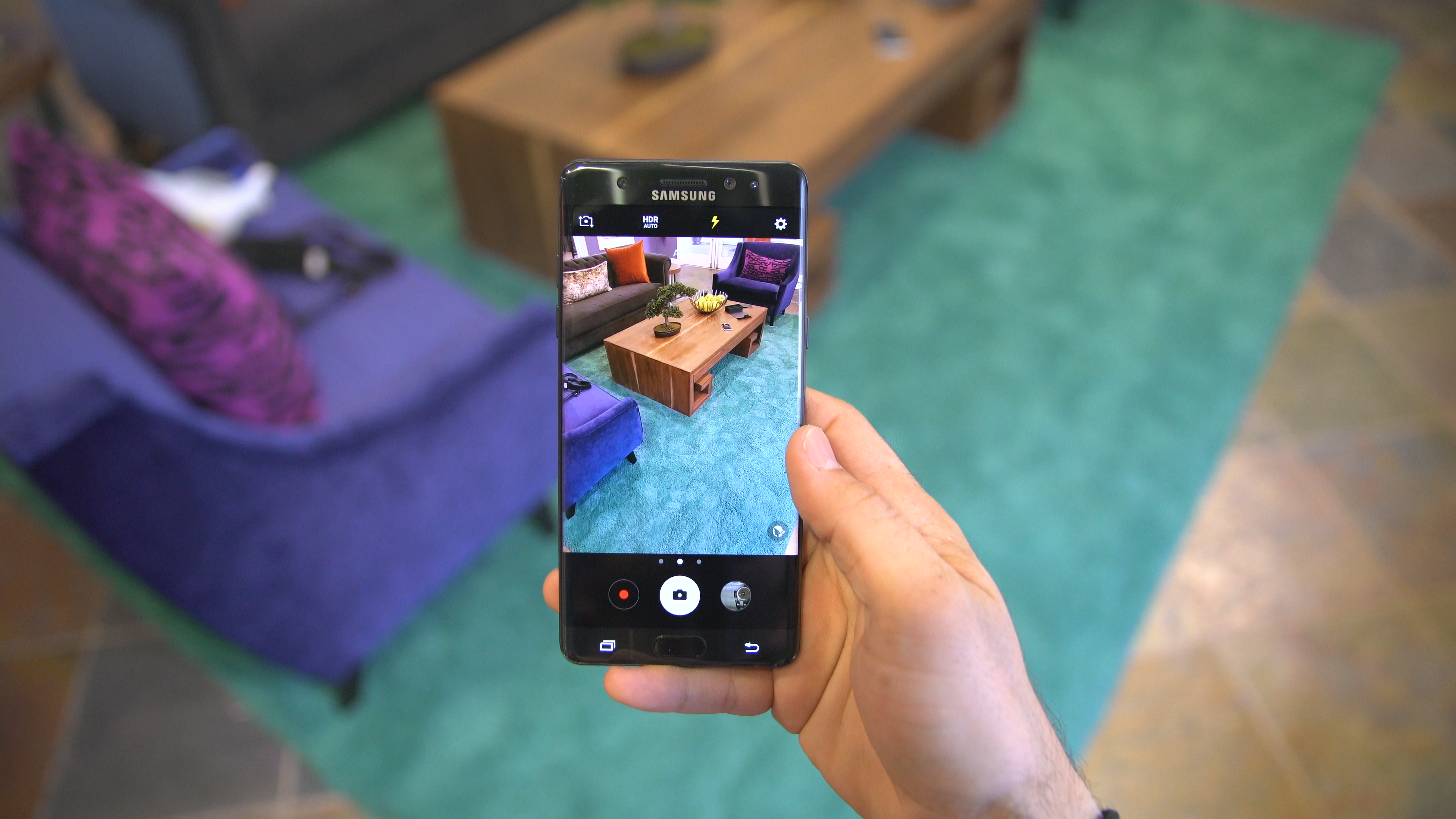 Around the backside, we have 12-megapixel camera sensor capable of 4K video recording, that’s identical to the one found in the Galaxy S7 and S7 Edge. I said it before, but this is the best camera on a smartphone. Hands-down. The pictures are simply awesome. This camera can easily stand up against any other on the market. But if you’d like to check out full resolution photos for yourself, check out the gallery below. And if you’re a selfie enthusiast, the Galaxy Note 7 also packs a 5-megapixel with a wider angle to capture everything in the frame.

As for battery life, here’s what you need to know about the 3,500 mAh block inside of this thing… So far I’ve been impressed with nearly 6 hours of screen-on time on some days. I’ve easily been able to make it through the day with atleast 30% battery left, but with wireless and fast charging options built-in here, you’ll have no problem juicing it up. But make sure that you subscribe if you want to catch a comparison between the Note 5 and Note 7 in the near future. 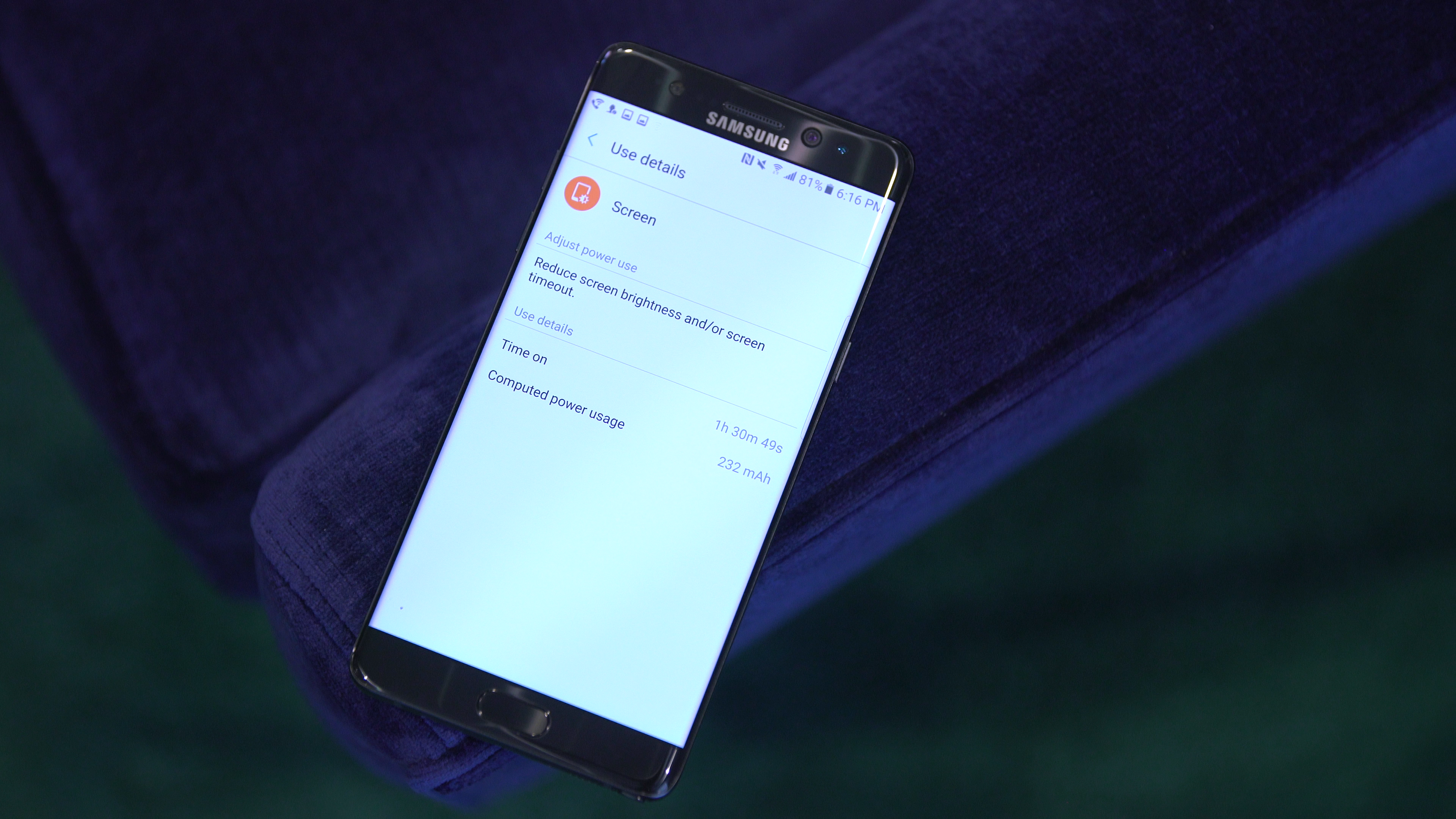 Here’s the deal, while I may not have been initially impressed with what the Note 7 has to offer. That doesn’t mean it’s not a great phone. Samsung has kind of hit a pinnacle of design and functionality in its smartphones at this moment in time. They are all on the same level, and while that’s not a bad thing, it’s just not as exciting as it used to be. But this is the best that Samsung has to offer and that, is a pretty good thing. I’m a big fan of Samsung’s lineup this year and while the Note 7 is a smaller step forward, it’s the final piece to the puzzle this year.