If you’re reading this site and haven’t heard the name TouchWiz, I’d be surprised. That’s Samsung’s moniker for its Android “skin,” the modifications it makes both visually and functionally atop what is Google’s most pure version of Android. TouchWiz definitely has a name for itself, and it’s not a good one. It has gotten better in recent years, but TouchWiz has long equated to laggy UI, ugly design, and not-much-more-than-a-gimmick software additions.

Now, it appears, Samsung is officially moving on from the baggage-carrying TouchWiz branding.

The latest Nougat beta that’s rolling out now for the Samsung Galaxy S7 and the S7 edge goes without any mention of TouchWiz. Rather, it appears (via Android Central) that Samsung has settled on a new name: “Samsung Experience”. This is the third Nougat version, and the ever-reliable Samsung site SamMobile says that it adds “Samsung Pass, the Samsung Note app, an auto brightness button in Quick Panel, moves the position of the “Close All” button from Recent view back to the bottom aside from bug fixes and stability improvements.” Lots of goodies.

But it also, as mentioned, replaces mentions of “TouchWiz” in the Settings app with “Samsung Experience”. And I guess that makes sense, since TouchWiz isn’t really TouchWiz anymore — it’s much cleaner and refined now. It’s not perfect, and there’s a reason that one of the top Google search results for “TouchWiz” is still “How to get rid of TouchWiz on your Samsung Galaxy phone”, but it’s nice to see that the Korean company is officially moving away from the name. 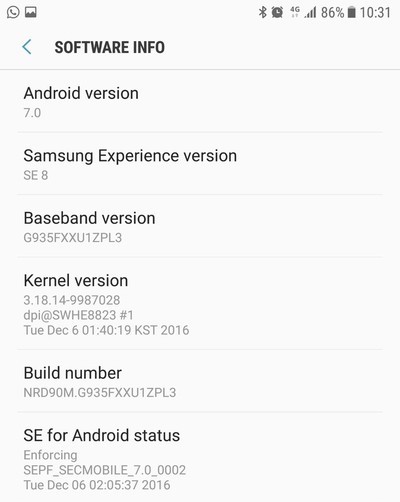 It seems like a natural transition, and perhaps one that most people won’t even notice. It’s not like Samsung has been plastering the TouchWiz name all over its ads lately. Regardless, if this Nougat beta interests you, you can sign up for the Galaxy Beta Program through Galaxy Apps. This version is 528MB in size and brings the security patch level up to December.