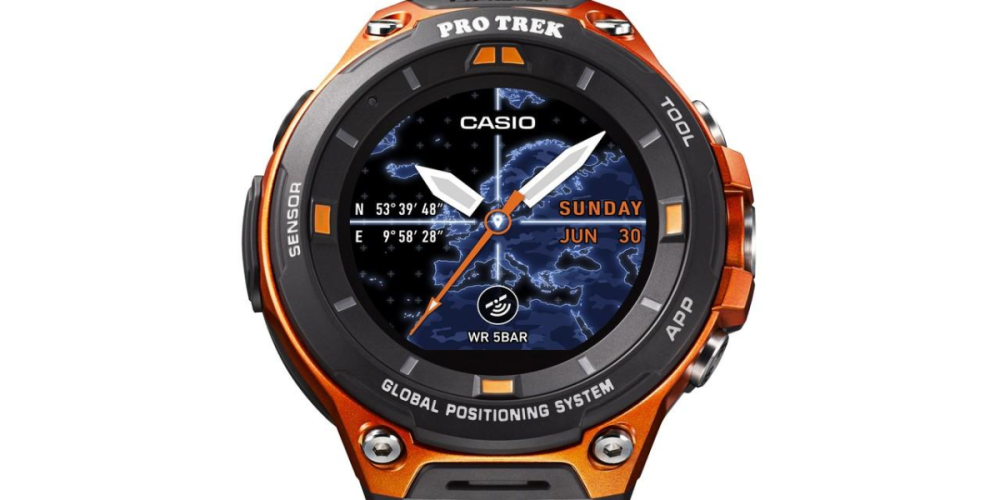 Visually, the WSD-F20 looks similar to its predecessor, though is slightly slimmer due to more rugged lines versus the continuous smooth surface of the first generation. The screen gains “anti-fouling coating” which should prevent stains from fingerprints.

Like before, it retains several hardware buttons for gloved usage of the device, as well as a MIL-STD-801G rating for protection against various elements, including up to 50 meters water resistance and shock/vibration. The full range of sensors include: pressure (air pressure, altitude), accelerometer, gyrometer, compass (magnetic).

The interesting 1.32-inch LCD dual-display from last year remains to provide a low-power monochrome mode with basic functionality. In the latter mode, battery life is rated for up to a month, with normal usage offering “more than a day.”

Added on is a low-power GPS sensor that works in conjunction with new downloadable offline maps to offer location tacking even without a phone connection. Casio built a number of apps, including a location tagging one, to complement the feature.

Casio will reveal more details about the device during its CES keynote at 1PM PST, though it will not go on sale until April 21st. Besides coming in a black or orange color options, pricing is unknown though it will likely be close to the original’s $500 price point.