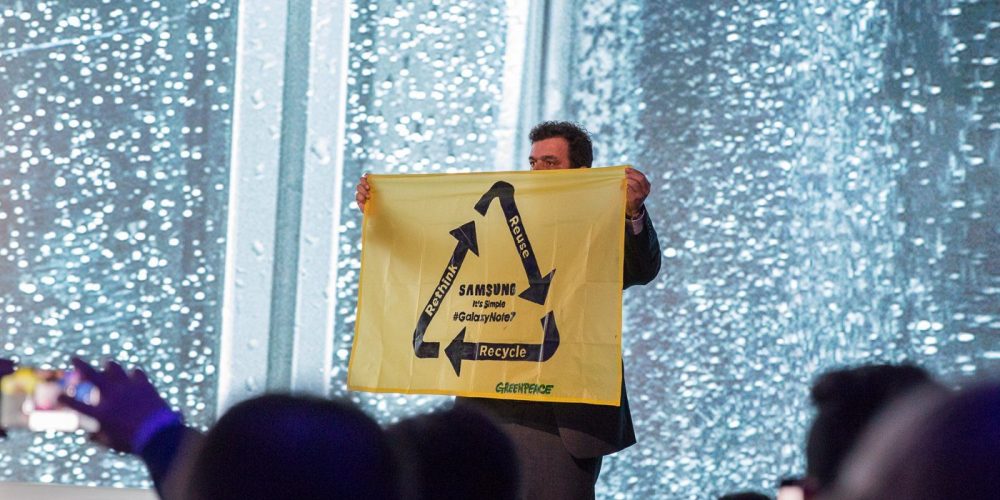 Protesting Samsung’s handling of the Galaxy Note 7 recall, Greenpeace interrupted the company’s MWC event and keynote earlier today. The group unfurled banners outside the event and interrupted the presentation shortly after it began.

In a blog post, Greenpeace Spain notes that it is upset at Samsung for not yet providing an adequate plan for how they will recycle the 4.3 million recalled Note 7s. The article goes on to criticize the industry’s general lack of phone repairability.

Outside the building where Samsung’s MWC presentation was held, the group attempted to unfurl a massive multi-story banner, but were stopped by event staff. However, Greenpeace was successful in interrupting the keynote shortly after it began, requiring the Samsung presenter to recognize the disturbance, “I think you’ve made your point.”

The sole protestor in the room carried a smaller banner with same message: “Reuse, recycle, rethink.” Afterward, the presentation continued without further disruption.

Samsung went on to announce the Galaxy Tab S3, an updated Gear VR headset, and teased an Unpacked event next month for the Galaxy S8.