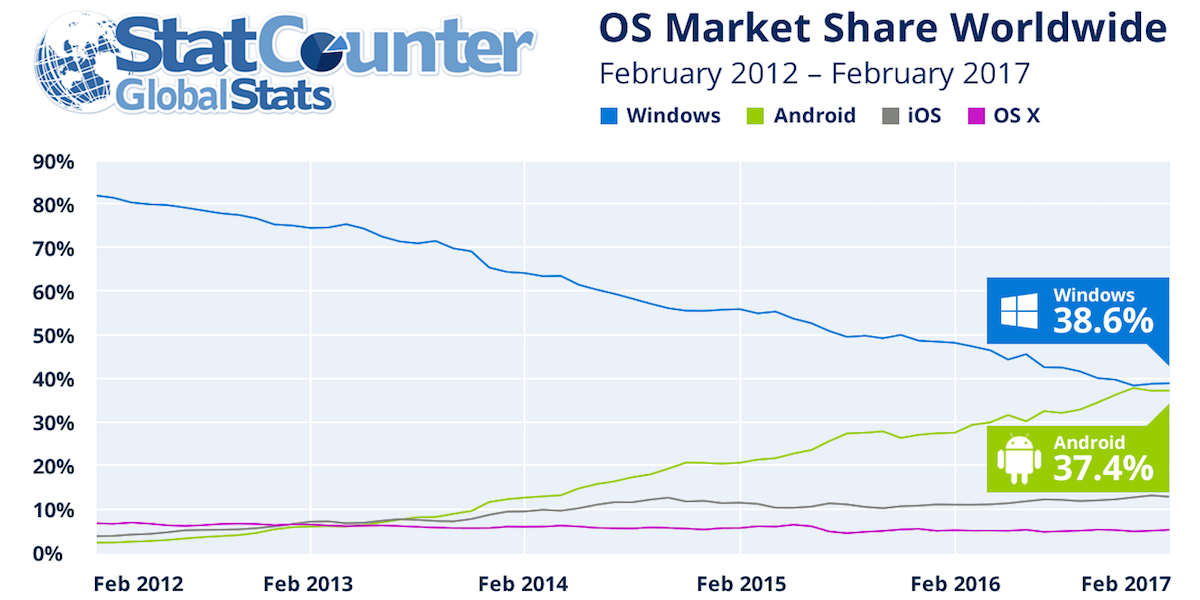 StatCounter is out today with its data for February 2017 and highlights that Android is inching closer to passing Windows as the most popular operating system for internet usage worldwide.

The analytics company charts its latest data across desktop, laptop, tablet and mobile, with previous years showing a significant climb in market share for Android at the expense of Windows. From a 82% share for Windows in 2012 (compared to 2.2% for Android), the Microsoft OS now sits at just 38.6% as of last month, with Android hitting as high as 37.4%.

“The idea of Android almost matching Windows would have been unthinkable five years ago,” commented Aodhan Cullen, CEO, StatCounter.  “In January 2012 Windows held 82% global internet usage share compared to just 2.2% for Android.” …the development was a function of the growth of smartphones to access the internet as well as a slowdown in sales of traditional PCs plus the impact of Asia on the global market.

The report notes that Windows still continues to dominate the worldwide operating system when just looking at desktops with 84.1% of the market as of last month. It also remains on top when isolating just the US and Europe markets (followed by iOS at 24.9%), although Android is now at over 50% in Asia where it’s made strong gains recently:

StatCounter pulls its data from its software that analyzes 15 billion page views per month from 2.5 million+ websites. You can read the full report on its website.