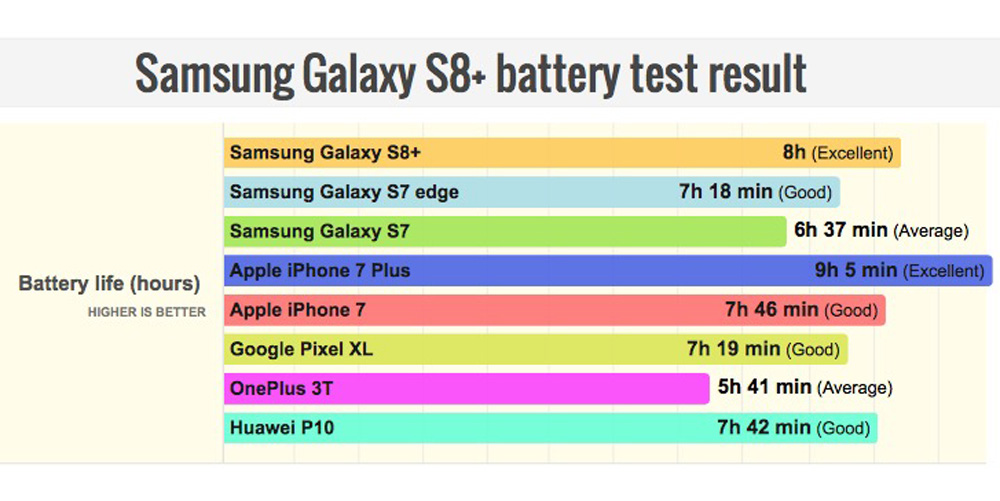 Battery-life tests conducted by PhoneArena show that Samsung’s Galaxy S8+ phablet out-lasts other Android flagship devices, but fails to match the performance offered by Apple’s iPhone 7 Plus. The site reports that the device provided exactly 8 hours of use.

The Galaxy S8+ battery life test result stands at exactly 8 hours. Compare this with the 7 hours and 18 minutes that the already very good Galaxy S7 Edge scored, and you see that Samsung has managed to improve on their last year’s phone. The S8+ also bests the Google Pixel XL, the OnePlus 3T, but falls a bit short of the battery life on the iPhone 7 Plus …

With that kind of usage, says the site, the S8+ can reliably deliver a full day of heavy usage, but doesn’t quite make it into two-day territory.

It is able to fully recharge its battery in just 1 hour and 40 minutes. This is not the fastest we have seen, but it is not too far off.

Charging times are, of course, significantly longer if using the wireless charger.

The S8 and S8+ were announced last week, and we got a brief hands-on. Samsung’s new digital assistant Bixby is a key feature, but you can also install this on older Samsung phones,