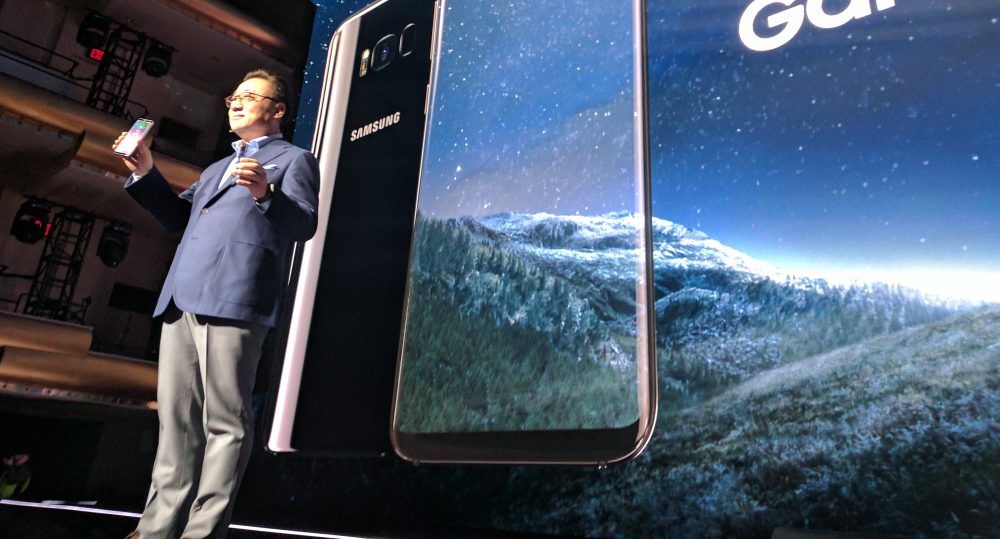 Following the Note 7 disaster, Samsung needs a win and coming from dozens upon dozens of leaks over the last several months, we’re finally here — the Galaxy S8 is official. Today at an event in New York City, Samsung officially announced its latest smartphone. Here are all the details.

First and foremost, just as Samsung has been teasing, the Galaxy S8 and S8+ are the company’s first “bezel-light” smartphones, trimming down the bezels along all sides to cram a larger display into a much smaller body. The Galaxy S8 has a 5.8-inch display whereas the S8+ has a 6.2-inch display. In terms of size, though, these phones aren’t much bigger than last year’s Galaxy S7 family. Both displays are also SuperAMOLED, QuadHD panels at 2960×1440 with Samsung’s always-on display feature.

Running the show is the new Qualcomm Snapdragon 835 processor paired with 4GB of RAM and 64GB of storage (w/ microSD) on either device. There’s also a 3,000 mAh battery in the S8 and a 3,500 mAh battery in the S8+, both with fast charging. That’s more than powerful enough for your average smartphone, but Samsung has some tricks up its sleeve to push this phone to the limit.

First, there’s the company’s latest software version layered over Android 7.0. “Samsung Experience 8.0” isn’t all that different from Nougat on the Galaxy S7, but it has some added tweaks such as the new on-screen buttons, Secure Folder out of the box, and of course Samsung’s new AI assistant, Bixby.

On the Galaxy S8, Bixby can be used in several ways. In the camera app, it can be activated and used to identify objects that the camera sees. In other supported apps, Bixby can also use voice to complete actions for a user. This can be triggered using a hotword or the dedicated Bixby button along the side of the phone. Bixby will also have a Google Now-esque ability with it being able to show you weather, suggested apps, traffic data, and more.

Another software trick Samsung has on the S8 and S8+ comes in the form of DeX. This, combined with Samsung’s official dock, allows the phone to plug into a TV or monitor and create a desktop environment of sorts, but based on Android. It’s similar to Microsoft’s Continuum on Windows 10 or Jide’s new take on Remix OS.

Further, the Galaxy S8 is one of the first smartphones with Bluetooth 5.0 built-in which adds a few interesting capabilities to the device. Samsung’s biggest use for this, though, is the ability to connect two wireless speakers or headphones to the phone at once while keeping both active for audio playback.

The Galaxy S8 and S8+ also both pack rear-mounted fingerprint sensors alongside the camera module which is a 12MP sensor just like the S7. There’s also an 8MP camera on the front of the phone.

Samsung has also, thankfully, included a headphone jack on the device, but still maintains the same IP68 dust/water resistance rating as its previous flagships.

As for a release date, Samsung will be opening up sales on April 21st. Samsung isn’t confirming pricing for the Galaxy S8 and the S8+, leaving that to the carriers. The phone will also be available in several colors including black, orchid gray, blue, and silver. Stay tuned for our hands-on with the S8 and S8+ from Samsung’s NYC event.