The Internet has matured quite a lot over the years, and while websites now load faster, look nicer, and offer more features than ever before, a lingering frustration is when a video automatically plays without your permission.

Thankfully, according to Googler François Beaufort, you’ll soon be able to mute entire websites so that you don’t have to be bombarded with videos you have absolutely no interest in.

Beaufort took to Google+ earlier today to announce that the Google Chrome team is currently working on a new feature for the web browser that will allow you to mute websites with just a few short clicks. In the screenshot that was shared, we can see that you’ll be able to do this by clicking the “Info” or “Secure” label to the left of the URL for the website that you’re currently on. This will open up a pop-up menu as per usual, but there will be a new Sound option that will allow you to mute any and all sound from that particular site.

As mentioned above, this feature will be most useful when visiting sites that automatically play videos. Auto-playing videos are often found with advertisements, but there are also sites that choose to play their own content automatically with the sound turned on by default.

Google announced earlier this summer that it would be rolling out ad-blocking features in Chrome in early 2018 to help combat intrusive online ads, and while that will still help with advertisements with auto-playing videos, this latest addition to Chrome looks to act as a great line of defense for non-ad videos and any other intrusive sounds. 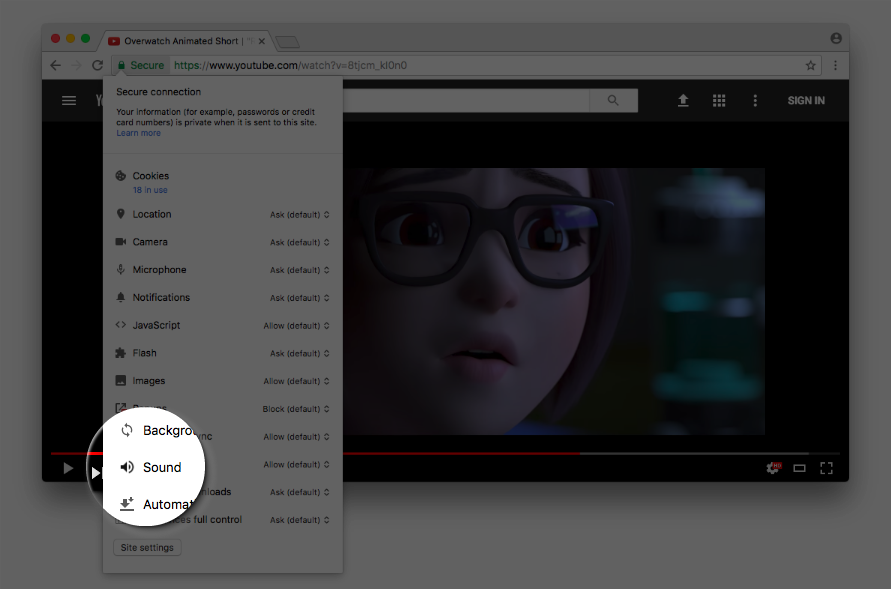 There’s currently no word as to when the new Sound tab will be available to use in the full version of Google Chrome, but Chrome Canary users can access it right now by enabling it with –enable-features-SoundContentSetting.